Spoilers below, of course: we’re talking about the last issue of the run! 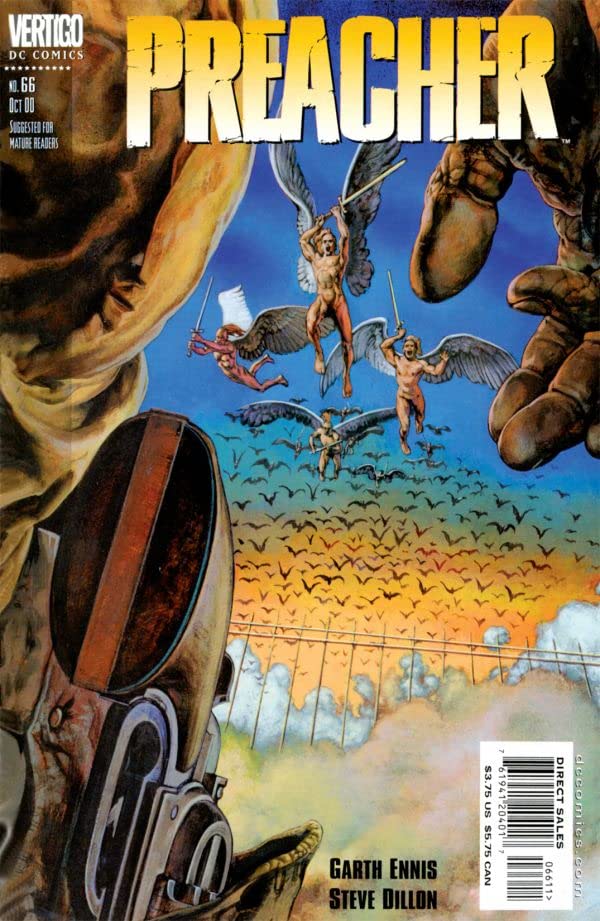 Almost everyone is dead as issue #66 of Preacher begins. Cassidy and Jesse have had their final fight, and Tulip finally killed Herr Starr. Which means that this last issue isn’t a final part of the ongoing story, but an epilogue which leads us on to the next. For a series which is so thematically rich and stabs at so many different topics, it makes sense for the final issue to be more about the emotional payoff than a final round of gunfire and violence. It’s that emotional side of the series which shines through at the end of everything, and finishes the story in a surprising, rich, and resonant manner.

Masculinity is a recurring topic through Preacher, and issue #66 begins with three quotes: from American novelist Larry McMurtry (who passed away only last year), Bill Hicks, and a few lines from The Cowboy’s Lament. All three connect to Jesse’s romantic ideals of being a cowboy who travels the world, doing good and offering justice, which we’ve repeatedly seen through the series and which close off his story within two stunning, iconic splash pages by Dillon and Rambo. Yet the quotes also suggest that not every battle is won with fists and grit alone, and this final issue goes out of its way to show that emotional acceptance and understanding is far more important that righteous justice and anger.

The triumphant moment for the issue doesn’t involve God at all – in fact, Jesse is completely split from the high concept of the series before this final issue begins, losing the word of God and in the process disconnecting from any idea of a reckoning with his maker. Instead, Jesse’s revelation comes when he goes back after Tulip and she sees him cry for the first time. His ability to express how much she means to him is how she realises that he is capable of change and improvement, and that’s what finally leads her to take him back and ride off with him into the sunset.

Earlier in the issue, after an off-page resurrection for Jesse, Tulip breaks up with him and he accepts it as fair. He had gone back on his word that he would treat her as an equal, drugged her, and gone off to “the last battle” by himself. As frequently proves to be his weakness, Jesse believes that he has to do things himself in order to keep everyone else safe, and all that gets him is a bullet through the head. Post-resurrection, he watches the love of his life walk away, and all he can say is that she’s right to do so. That acceptance is another way of using masculinity to shield himself from being an active presence in Tulip’s life, and although it’s led him through all the crazy things that happen to him throughout Preacher, it has also repeatedly left him alone.

When he goes back after Tulip, she again rejects him, knowing that he’s simply going through the same cycles that he always goes through. The same cycles we already saw that Cassidy went through during his afterlife, marked by the consistent downward spiral of a self-denying monster. Jesse’s arc in the issue isn’t to go all John Wayne and go after his “gal”: it’s instead to accept that he is the person who needs help and growth, and to ask Tulip if she can forgive him.

The issue returns to this theme with several other characters. Mostly notably? Uh, God. Returning to heaven in self-aggrandising triumph, God is met by the Saint of Killers, who has a gun in his hand. Immediately realising the danger he’s in, God tries to manipulate, threaten, and plead for his life, none of which end. He didn’t stand up when he was needed, in the way he was needed, and so has not learnt the lesson Jesse learns. Preacher is adamant on one point: you can’t be a real man if you don’t hold true to your word, and neither Jesse, Cassidy, or God were able to do so. That’s why God is killed off; why Cassidy became the villain, and why Tulip leaves Jesse.

But change is possible, and Jesse finally starts to accept that his vision of pure action-hero masculinity is self-serving bullshit. “We don’t gotta just accept the way things are”, he tells her, turning his vision inwards rather than outwards. He realises that his macho way of doing things only serves to hurt the ones he loves, and keeps him regressing rather than moving forward with Tulip. He cries, and she sees him finally opening up and accepting his own problems. No more repression; no more internalising; he sees that he needs to change, and promises that he will.

There’s a view of Preacher as being a series which is cynical, grotesque, “cool” and aimed at a certain kind of male reader. And whilst all of that is true, the lesson of the final issue is, surprisingly for Ennis, that fragility and vulnerability are crucial and empowering tenets of masculinity. Jesse and Cassidy head off for an uncertain future, riding off into the sunset with the knowledge that they can – and should – change. And that’s the final message of the Preacher’s sermon.

Preacher #66: “A Hell of a Vision”
Written by Garth Ennis
Drawn by Steve Dillon
Coloured by Pamela Rambo
Lettered by Clem Robins