Do You Want The Truth Or Something Beautiful? 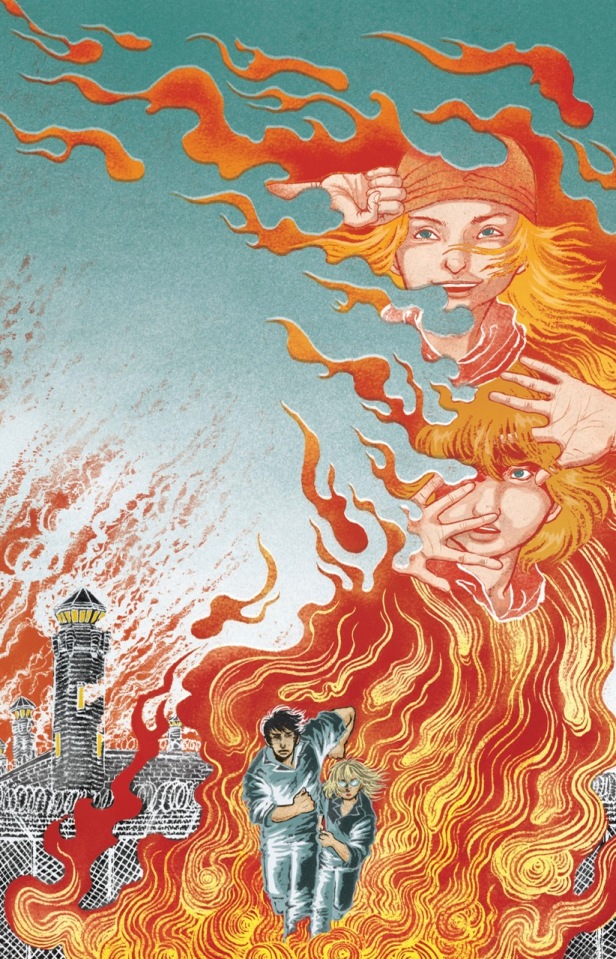 This arc of The Unwritten is called ‘Inside Man’, which immediately seems to come from the story itself: Tom Taylor is locked up in prison, and therefore he is the Inside Man of the title. But as the story continues on, there’s a growing argument that Tom is the inside man not simply because he’s in prison, but because “Tom” Taylor doesn’t exist anywhere except inside Tommy Taylor’s heart. The more time we spend with him, the more it becomes clear that Tom is the fictional creation of his father, and somehow his true identity is the fictional identity of Tommy Taylor. His constant rejection of this truth seems to become increasingly desperate, and in issue #9 he appears to be on the verge of just accepting that he’s actually some kind of magician with literary powers.

That acceptance grows after he and his cellmate, Savoy, both witness an image of Roland and his horn before they’re greeted by Mingus, the flying cat. That Savoy can also see both these images – and takes a photo of the cat – seems to break Tom’s reality a little. Until now he was the one seeing most of these crazy things by himself: there were no witnesses to see him talk with Frankenstein’s monster. Savoy acts as a confirmation to Tom that these things are really happening right now, and as the issue goes on Tom starts to accept that when he acts like Tommy, things go exactly the way any reader might expect them to. Tommy’s magic doorknob successfully opens several doors through reality, Mingus reacts to him with affection, and everyone around him from Lizzie and Savoy through to the warden’s children all seem to confirm that Tommy is the real person here. What is Tom to do other than accept that narrative?

But then there’s the idea that the Inside Man of the title is Savoy himself, who clearly appears to be hiding something from the readers. Savoy writes the ‘Inside Man’ blog which provides narrative captions across the course of the arc, wherein he shows a lot of knowledge not just of the Tommy Taylor novels and their plots, but also the metaphors contained within. Savoy is reading the books with a critical mind first and foremost, so when he writes about Count Ambrosio, he’s not writing about an immortal vampire. Rather, he’s writing about what the immortal vampire represents. 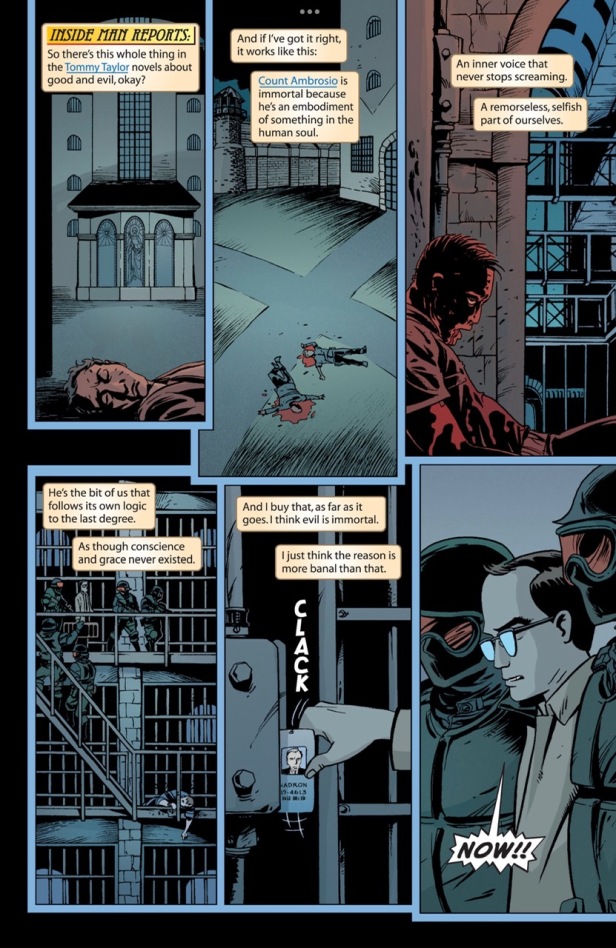 Crucially, Savoy’s narration in the first pages of the issue talk about how Ambrosio embodies the banal, everyday evil that every person could be capable of, should they choose to. He’s the voice in your head which tells you to look after yourself first, and make sure you get what you want. As he narrates, we see the jail stormed by armed guards, who have all decided to accept money in exchange for breaking into the prison, killing civilians and inmates alike. They’re a clear example of the critical analysis which Savoy took from the book, suggesting that his insight into the novels – his role as an “inside man” narrating the point of these stories for us as readers – is the most pointed and apt of any of the characters we’ve seen so far.

It’s a contrast to Governor Chadron, who read the books as cosy moral plays for his children, teaching them useful lessons for adulthood… lessons which coincidentally also reassure his own sense of guilt over being not particularly great at fatherhood. The Governor has a message he wants to get across to his children, and he uses the books as a shortcut to get towards them. Savoy, by contrast, questions the storytelling in the books, and doesn’t use them as a way to push his own narrative. These differing approaches to what a story means seem to be crucial in the final pages of the arc, as we see the Governor fall into the role of villain in the eyes of his children. He may have been the keeper of justice and someone they admired before – but on the inside, he’s the villain, and they accuse him of being controlled by Count Ambrosio.

That turns out to be the literal truth in the final few pages of the issue, as the vampire takes over Chadron’s body and announces that he is now reborn. Chadron’s arc was always bound to end this way, we realise, because he fell into a literary role which would make him the natural enemy of our hero, Tommy Taylor. Savoy and Lizzie fall into supporting roles as Tommy’s allies, and all Chadron needs is one nudge to push him into being the ideal vessel for the Count to claim. And it all plays back from Savoy’s narration: the Governor accepted the money for the attack to take place, hoping that they’d kill Tom Taylor and leave Tommy Taylor alive. The truth is excised, and the happy fantasy is left alive. 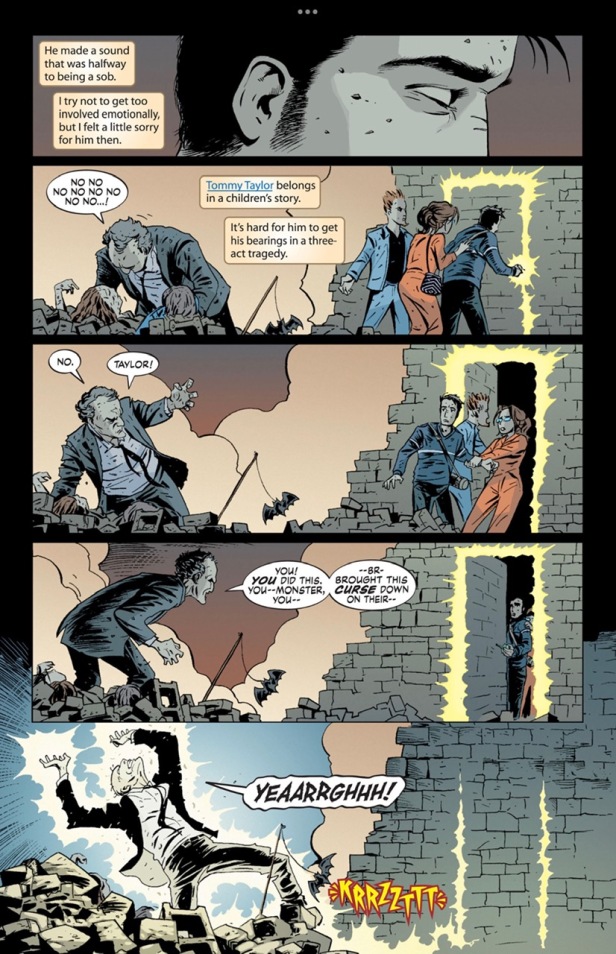 This isn’t a fictional world, though, and the Governor’s idealistic view causes complete tragedy. As anyone familiar with Mike Carey’s writing would know, those kids aren’t going to live, and sure enough they are killed amidst the fighting, as a wall collapses on them and kills them. On some ironic level, the Governor gets what he wanted. Tom Taylor dies in that moment, taking the door knob and leaving the prison for dimensions unknown, embracing the Tommy Taylor identity that was inside him the whole time. But as Tommy Taylor comes to the fore, so his old enemy Ambrosio returns as well. Savoy says that Ambrosio exists in the darkest part of mankind. The Governor’s tragic arc proves Savoy’s critical conclusion regarding the nature of fiction and how it can be applied to the real world. In doing so, it suggests that Tom Taylor now has a vital ally by his side.

A man on the inside, so to speak.