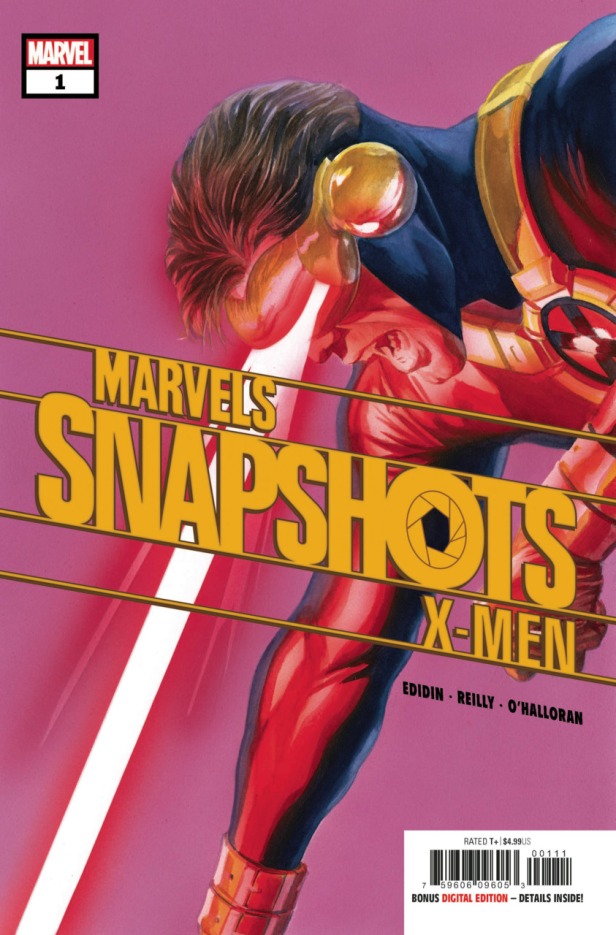 X-Men: Marvels Snapshots, by Jay Edidin and Tom Reilly, opens with a disorienting procession of eyeless faces: two pages of eyes obscured by flashes of light, by raised hands, by shadow, by the dark lenses on a surgeon’s goggles as he approaches ominously. Scott Summers, years before he becomes Cyclops, is in the midst of a nightmare. He bolts upright, and we get the first glimpse of unobscured eyes in the issue. They’re wide-open, the irises a flat, hot pinkish-white.

Much like with New X-Men #142, Snapshots is a more or less self-contained story about Scott and the practices of seeing, and of being seen. Unlike New X-Men, a story about a grown man tired of the world in front of him, Snapshots is about a boy anxious to the point of near-panic about it. Scott’s world is frightening and confusing, but also abuzz with the frisson of a problem asking to be solved. It throws up, from the very first pages, a blank face which he confronts, even in his alarm, with open eyes. It is about him learning to see as a slow, methodical, but ultimately triumphant process of self-realization.

Edidin, one of the two hosts of the podcast Jay & Miles X-Plain the X-Men, is one of Cyclops’ most thoughtful and generous modern interpreters. His zine Ruby Quartz Panic Room is a mission statement for his approach to Scott: it limns Cyclops’ alienation and unease, his difference within the crowded sphere of white male superheroes, not as limitations as such but as tender and emphatic points of queer and neurodivergent identification: 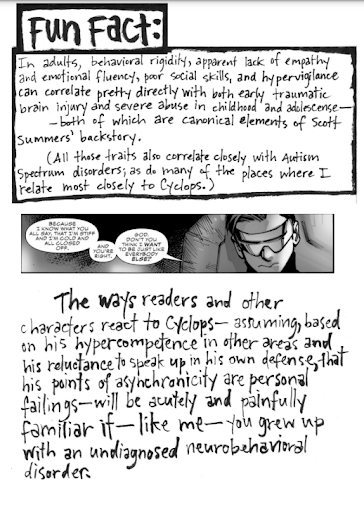 Edidin proposes that precisely the elements which make Scott unapproachable and off-putting to other characters (and some readers) make him a fascinating figure of identification for marganized fans such as Edidin himself.

I find Edidin’s reading persuasive, and relate pointedly with his empathy for the ways in which language often seems to fail Scott. I remember the persistent low level ache of experiencing closeted queerness in the 90s without a corresponding language to process it. I remember the muted conviction that something was wrong with the way I embodied myself, or framed the narrative apparatus of myself in the world. Edidin writes elsewhere in his zine, “The mutant metaphor may have its flaws– but it makes Cyclops a remarkably good avatar for queer rage.” Like Scott, I perceived a problem with the narrative apparatu, with no vocabulary or conceptual framework with which to fix it or even address it.

In Snapshots, Edidin emphasizes Scott’s essential sense of altruism as a supplement to his analytical, problem-solving mind. What’s crucial to his take on the character is that his urge to do good is an anxious, almost compulsive need to piece together broken things. I think of another story that, to me, encapsulates the nervous longing of Scott to chase order in a breaking world: Chris Claremont and Mike Collins’ “Little Boy Lost” from Classic X-Men #41. Another flash-back to Scott’s childhood in the orphanage, we find him here grieving on the rooftop where a peer recently committed suicide: 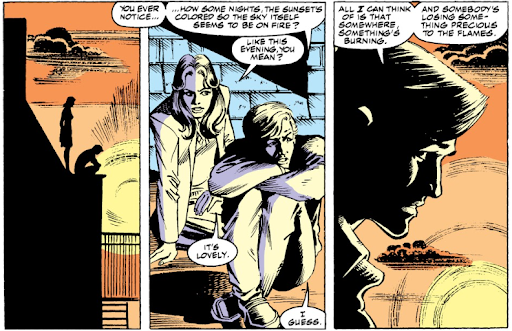 Here too the metaphor of Scott’s restless moralism is specular: the vivid colors of the sunset speak to him of disaster and loss, casting a melancholy tint on the red filter through which he’ll experience his adult life.

Claremont’s take is tragic, while Edidin’s is decidedly more hopeful, with Scott deciding early on in the story that the nascent crop of Silver Age superheroes emerging in the news represents a new way to interface with the overwhelming messiness of the world, a way to address pain from a position of radical alterity. As he watches a newsreel of superheroic adventures, transfixed, we zoom back in on his eyes. They’re lit up with the same dim fire as before, now an index not of his confusion and terror, but of something clicking into place:

Scott’s need to manufacture meaning out of jumbled phenomenon, and his admiration of those people who have managed to do so before him, runs in parallel with Edidin’s version of the familiar but primally compelling story of the emergence of Scott’s powers as a trauma of vision, a sudden betrayal of eyes which, previously, had seemed singularly trustworthy in their ability to link Scott with the world in which he found himself embedded– his primary instruments of interpretation and discovery.

Eventually, Scott gets his hero moment, saving a group of people trapped under rubble by using a piece of glass and a narrow beam of light to signal to rescuers. Edidin frames this emergence from the claustrophobic darkness into safety, this instrumentalization of light and visibility, as Scott’s true origin story; the moment in which he turns from trying to passively make sense of a volatile world, towards making sense of himself as a vehicle for change. 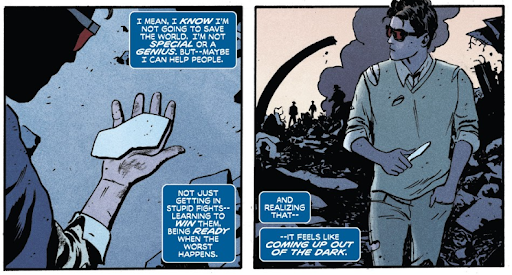 Scott’s “coming up out of the dark” is an embrace of the responsibilities of being seen and seeing. Of perceiving what is missed by others, and of persisting in visibility in all of one’s idiosyncrasies.

While the story is ultimately optimistic – an alienated boy finding a mode of action and purpose that permits him to unify his frustrated sense of selfhood and his bewilderment at the apparent illegibility of the world at large – it also acknowledges the importance of the allure of repression to Scott’s story. This is a trajectory which is familiar, perhaps, to many queer or neurodivergent readers who felt ill-served or misapprehended by the social and cultural narratives handed down to them. His “rebirth” as a mutant is a watershed not only in giving him a name for what was previously an inchoate sense of longing and displaced grief – a name for what he is!!! – but in simultaneously putting a target on his back, shining the spotlight of otherness and marginalization on him where he had once been merely a slightly oddball little kid.

“The glasses hold it in,but it hasn’t stopped. I feel it every time I open my eyes– like it’s trying to pull my head inside out. I wonder if I could just keep them shut forever.”

As in Morrison, not witnessing is tied to not acting, and not feeling. To avert his gaze is to abdicate the obligations of witnessing, of being cognizant of an external world in which one is situated and by which one is shaped. It excuses Scott from the agonies and trials of being seen, of being misrecognized, of being misunderstood, of being mute and uncomprehending before a mute and incomprehensible universe (and it keeps the red laser beams in check, at that).

Sight grants him autonomy and power, and strips it away – just as his optic beams grant him both the degree of superheroic exception that he fantasized about previously, and an unwilling fiat to violence that he fears and loathes. What then is he to do? Edidin returns to Scott’s earlier revelation – his imperative to recognize and respond, his resolve to make the leap from perceiving to acting even in the absence of perceptual or ethical certainty. “My whole life,” he thinks, just prior to discovering his powers “has felt like something that was happening to me. Freefall. Being stuck on a runaway train. All I could do was wait for the crash. No more.”

Edidin’s positioning of Scott as an aspirational figure captured in the process of struggling towards self-knowledge is elegantly rendered in these moments of taut hesitation. There is a moment in every openly queer person’s life when a privately held conviction makes the excruciating transition into public avowal, when what was secret becomes an outwardly manifested and embodied facet of identity. This is compounded by what Edidin proposes as Cyclops’ neurodivergent or neurodivergent adjacent-traits– traits which make his attempts to articulate himself to the outside world doubly difficult, as in this panel from Ruby Quartz Panic Room: 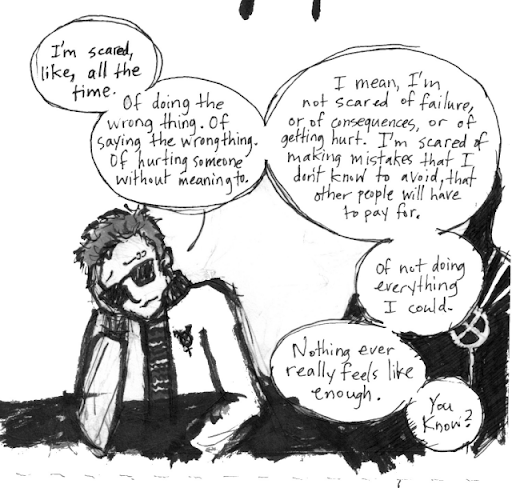 The intent to speak chokes in his throat. His eyes clot with supernatural energy. He falters. “He’s not the best or the nicest or the coolest or the most powerful,” Edidin writes. “He just tries really fucking hard.”

This is the takeaway of Snapshots, and the source of the jittery, cathartic jouissance of its climax. Cyclops’ eyes will never be “normal.” The pipeline from intent to action will be idiosyncratic, janky, and/or queered. The issue (excluding a brief coda) ends with him fleeing the scene of his powers’ emergence, worrying about his new-found monstrosity when a sudden crisis – a large piece of machinery hanging by a winnowing thread over a crowd of bystanders– places him in the story’s quintessential bind. Will he remain in anonymity, a thin young face in the crowd, as people are hurt, as things are lost in the fire, or will he, as a mutant, out himself, and in the extravagant red signature of his self-disclosure nudge the world in a different, more humane, less bewildering direction?

For Edidin, this is barely a question. Scott will not wait for the crash. 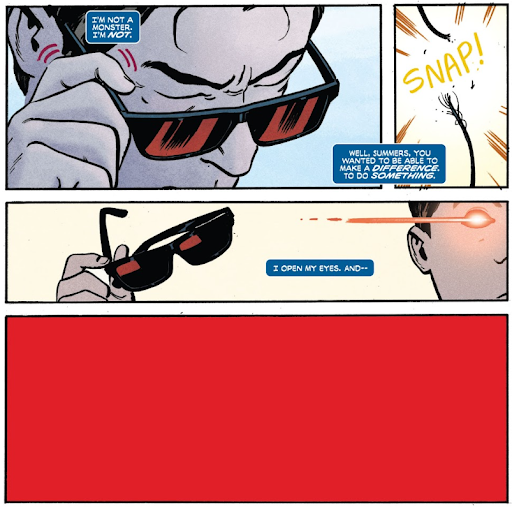 Holly Raymond is a writer and teacher living in Vermont with her wife and dog. She holds an MFA and a PhD from Temple University, with a focus on gay ghosts and the people who did their typing for them, and is the author of Mall is Lost (Adjunct Press, 2019) and Heaven’s Wish to Destroy All Minds (woe eroa, 2020), with work also appearing in the Lambda-nominated We Want It All: An Anthology of Radical Trans Poetics. Find her on twitter or instagram @goblin_gavotte, or on her site here.