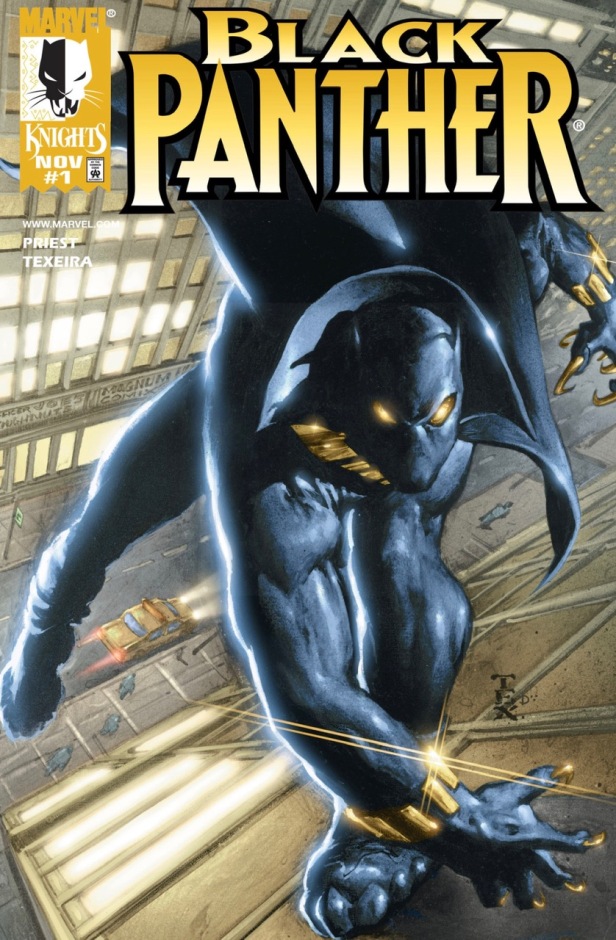 In the modern era, the Black Panther needs no introduction. In cinema, he is the titular hero king of tentpole film in the Marvel cinematic universe, played by the late great Chadwick Boseman. In comics, he is not only the king of Wakanda, T’Challa, but also a long-time Avenger with a plethora of stories and righteous moments throughout his publication history. The Black Panther became not only a key player in one of the most popular franchises of all time, but also an inspiring, influential figure for black audiences that wanted to see themselves represented in the mainstream.

One could say he is a prime example of what makes a fictional hero astonishing, with story arcs that range from defending his nation from alien soldiers and rivaling nations, to straight up destroying the Red Skull’s jaw in one of the most satisfying pages in his decades long existence. A character defined by his lineage, his action, and the love he has for his homeland and people, the Black Panther quickly became a household name that Marvel wasted no time investing in.

But before his appearance in cinema and immortalization in mainstream media, the Black Panther wasn’t always a character known for consistent stories, or for being the main attraction for a passing reader. After his creation in 1966, T’Challa was used for the occasional Avengers outing, or for very short mini-series that showcased his own shorter tales. The concept of a black superhero was always tiptoed around, and never given the full treatment it deserved, due to racism, white supremacy, and a fear of black culture from the larger population, especially in America. This is made apparent through sporadic stories and appearances over the next few decades that never really used Black Panther and his cast to their full potential.

But this all changed in 1998, when the reins were handed to renowned writer Christopher Priest, and the phenomenal artist Mark Texeira, who set out to give the Black Panther, and his cast of characters, the reputation he truly deserved.

Black Panther #1, titled “The Client”, reintroduces us to the king of Wakanda through the eyes of Everett Ross, a state department attorney assigned to keep an eye on our hero during an emergency visit to Brooklyn, New York. Through the recounts of this new supporting character, we follow the beginning of T’Challa’s quest to find out who was responsible for the murder of a young girl, as well as the mismanagement of funds, at the Tomorrow Fund, an organization he started to help those in need. The issue sets the stage of this story by jumping from various moments in time, as Ross relays the story through humor and ignorance, all while making it quite clear that T’Challa, as well as his partners in the Dora Milaje, are an intimidating, fearsome threat to those that get in the way of his mission.

This inaugural issue manages to balance action with comedy, through Ross’s white ignorance and nonsensical ramblings, to T’Challa and the Dora Milaje’s combat and intimidation with gang members deserving of comeuppance, all sprinkled with philosophy and lore on Wakanda and the cast that hails from it . Priest has no problem making the varying themes and moods seamless, while adding gravitas at just the right. All of this, coupled with extraordinary art from Texeira, background artist Alitha Martinez, and colorist Brian Haberlin, create an amazing first issue that reintroduced a prominent Avenger to the mainstream in a turbulent decade.

Priest’s story is one that makes reference to the pop culture and mood of the 1990s, a decade that was trying to put a larger focus and appreciation on black culture, but was still dealing with the racism and ignorance of those that were either afraid, or had an irrational hatred, of black people. There was a larger focus on hip hop and the growth of black talent in various storytelling mediums, but also a foolish sense of incomprehension from the general population through stereotypes and other falsehoods.

This can be seen through the character Everett Ross, who isn’t outwardly racist, or riddled with negative intentions, but fully thinks that stereotypes are true and acceptable, as he makes casual references to black slang and to the Brooklyn neighborhood he refers to as “the ghetto”, all while occasionally admitting, and showing, that he is a foolish white man. It’s a perspective that Priest makes full use of, as he has the character make a fool of himself multiple times, all while showing that he’s quickly learning that his prior misconceptions about T’Challa and Wakanda are far from the truth, something that a 90s America was going through on its own, to an extent.

While Ross is a representation of the ignorance and learning curve for the general populace in regards to black culture, the Black Panther himself, as well as the Dora Milaje through extension, are an example of the magnificence and potential that black people and their stories can bring. Past stories have T’Challa as a hero of action, but here the creative team show his true potential and skill through his handling of his enemies, as well as providing him with new gadgets and techniques. A sort of one-two punch that consists of the action and heroism that the 90s craved, combined with the philosophy and conviction that T’Challa displays, which is to strike down injustice, and create a haven for a minority that can be less fortunate and more susceptible to the dangers of the world just for existing.

Priest wastes no time showing that the Wakandan king and his subjects are shown to be proud of where they come from, instilled with a sense of justice, as well determination, that not only drive the story forward, but show that there is more to them than just the stereotypes and ignorance that are unfairly compared to. This isn’t something new to the mythos of the character, especially in past stories, but during a tumultuous decade like the 90s, a time where stories like this were needed, this showing is greatly appreciated, and resonates to send a message: that there is more to black figures and culture than the passing eye of the white comics industry can see.

Black Panther #1 was an issue that needed to come to fruition. It not only breathed much needed new life into one of the first black heroes, but it began to send a message to readers about a marginalized group and culture that needed more uplifting. It allowed the Black Panther to become a bigger household name, and opened a gateway to more stories and appearances from him and his cast, something incredibly apparent with the media we have today. This character, through Priest, Texeira , and rest of the creative team, gave not only inspiration to storytellers and black readers that needed a push of innovation and hope, but also showed a wider audience that there was more to black culture than previously thought, or at least presented another stepping stone to a wider conversation and outlook.

Brandon Davis is a New York writer, currently writing analyses for comics and movies, creating screenplays and scripts for his own projects, and editing his peers’ work – and maybe even you one day! You can find him and his ramblings here, on Twitter, and LinkedIn.

One thought on “1998 in Black Comics History: Black Panther #1 by Priest”