There’s something haunting about Aquaman. He’s a man whose roots are beneath the waves, who rules a mythic land of whispers and rumors, and whose domain is most of the world, which we still know staggerly little about.

This man wears no ordinary clothing. He’s instead covered in strange, alien textures that feel both impractical and impossible… yet strangely tangible. Strange shells and shapes line his chest, as his familiar orange and green color palette is retained through this unfamiliar look. He has eyes, but you do not see them as such. They are instead gleaming, impossible white specks held in shadows. He is surrounded by ink-black tentacles, which may be attacking him or serving him. Who can say? But regardless of the circumstance, it seems to not matter for this odd man, as he just gazes on and away into the distance.

This presentation is important to consider. Christian Waid’s terrific redesign of the iconic Aquaman for this new adult-spin is striking. And it is striking precisely because of what it repeatedly communicates:

This man is not one of us. He is nothing like us. He is a figure of the depths, the unknown, the uncharted, and the impossible. He’s something more than all of us. He’s something weirder than we can all fully comprehend. It deliberately distances you, the reader, from the familiar image of Aquaman you’re used to. More specifically, it distances you from Aquaman The Superhero.

Immediately, it is clear and evident that you’re not getting that here. You need to reset your expectations. This is not that guy; not the guy drawn by Ivan Reis or Paul Pelletier, not the guy under Geoff Johns’ pen. This is not a superhero. No, this is something weirder than that.

Something much more haunting.

The Stranger Of The Seven Seas

“Be careful what you commit to the water…the shape of things change, once they are within. In her embrace, ever we seek to drown our sins, but beware the shapes of forgotten things. Our fears and dreams are not our own once beneath. Those are now for the sunless depths, the crawling bed, and the king beneath the sea.”

These words, lettered beautifully by Aditya Bidikar, open the book, framed as the wisdom of a distant old father now lost to all but memory. In death he becomes larger than life, as parents often do for their children, a figure of the past whose legend still drifts on the tide.

And so is Aquaman. The character is presented here as ancient, old, and the king beneath the sea. We knew him once as the superhero who wore those colorful outfits – yet that is not the way he always is or will be. He transforms, as do we all, with time, and in that time he grows only bigger, grander. He is an individual made more abstract. 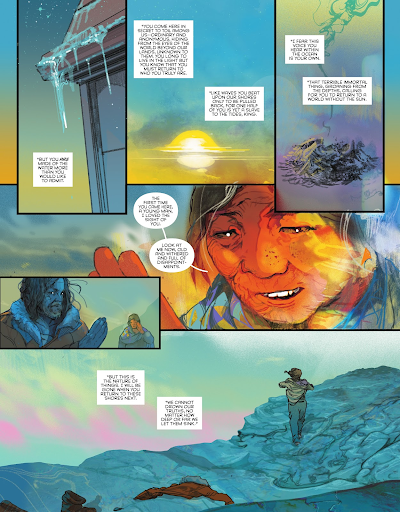 Whole lifetimes pass, and he still lingers in the drift. And his myth grows stronger, stranger. Ram V isn’t writing Aquaman the person or Aquaman the superhero here. He’s writing Aquaman The Myth – he is writing The Idea Of Aquaman. It is why the character is consistently framed through the eyes of others, and in great awe. He is something ancient, eternal, and impossibly larger-than-life. It’s an appropriate inevitability perhaps given he’s also the writer of Bhishan The Immortal in These Savage Shores and Levi Kamei The Swamp Thing: both of whom were mortal men transformed into something not-so-mortal. They become an Idea.

They are avatars, elementals, guardians of their lands and peoples. They are custodians that stalk their domains and represent an Idea made flesh: and so is Arthur Curry here. Except… his domain is not a kingdom in India nor is it the plant life of The Green. No, the domain of Aquaman is the water of our very world. He is its sacred guardian, its loyal sentinel, a man keeping watch like a lighthouse.

And the oceans he keeps watch upon? They are perilous. You think you know them. But what little you think you know is dwarfed by all that which you do not know. It is in those gaps, those spaces of unknowing, that Aquaman exists.

The Domain Of The Stranger

More than anything else, the oceans are the focus of this debut issue. Dan Abnett, who perhaps did the most comprehensive and sprawling run on Aquaman to date, has consistently talked about broaching the book like a cosmic title, only set under water. Certainly you can see that in his work, as the Warhammer and Guardians Of The Galaxy writer treats Aquaman like a big gigantic sci-fi fantasy space opera. And it works! It makes for some very fun sci-fi fantasy sword and sorcery stories full of factions, wars, and armies.

But there’s one crucial difference, is the thing: space is endless. It is ever-expanding and infinite in our eyes. It’s why the expanse of the stars excites, beckons, and calls to us.

The seas are not endless like space. They are limited, and they’re packed tight. If space represents the infinite opportunities of the heavens, then the oceans are the hell into which we cast things away to be forgotten. They’re where we spill our poisons, where we excavate that which has been lost.

As such, there is an inherent claustrophobic nature to the oceans underneath, which is why drowning is such a terrifying and very real fear. There’s a horror to the seas. A single tsunami can wreak havoc in a tangible way that space cannot – and as well, the oceans are tangible. We can touch them, feel them, we know them and yet we also do not. This proximity is what inspires the terror. It’s the terror of something being in your backyard or your basement, of the shadow you can’t grasp right behind you.

It’s Cosmic Horror, evidently, with the specificity of setting being key for this strand of Underwater Horror. It reckons with the vast canvas which dwarfs our very existence and makes us all feel small, it too is wrangled up in the unknowable and unanswerable, but it’s all tied up in our view of the immensity that is the ocean.

This, effectively, is why Christian Ward is such a tremendous fit for this book.

Ward is no stranger to cosmic comics. He can nail scope and scale, and capture the truly alien, as he’s repeatedly showcased across books like ODY-C and Invisible Kingdom. Now, what happens when you move such a tremendous cosmic artist over to do a book set underwater?

You get remarkable pages such as this. Notice how in a single page, Ward concisely conveys both the immensity of the oceans, and also the incredible claustrophobic capture of being within them. The waters cover the page, as the woman is, quite literally, trapped in little boxes overlaid on top of the setting. The ‘packed’ and ‘tight’ framing is nailed visually on page here.

But even beyond that, he can nail double-page spreads like the one that opens the book, with a scene underwater looking like a black-hole, as the waters themselves look like a cosmic backdrop. A fitting image choice, given black-holes just take in all matter, they ‘trap’ all things and seal them inside, with no escape. And that speaks to the nature of the ocean here, this devastatingly potent and ancient power that, once you’re in it, you may not be able to flee. It traps you within it. And if you let it, it will consume you.

An appropriate opening image, which makes a very specific promise. One that’s granted an extra touch of dramatic flair given the Stan Lee-esque ostentatious theatrical words ‘DC COMICS PRESENTS AQUAMAN IN…’, as though you were looking at a vintage movie poster. It’s a pulpy touch from the very period and era that Cosmic Horror was invented in the 20th century, but it never reads as ‘throwback’ or ‘retro’ or as ‘pastiche’ due to the stylistic flourishes and contemporary aesthetics the book is defined by. Bidikar’s lettering here is not winking,  referencing or gesturing towards an old artifact you’re meant to recognize. That’s not really the point. And besides, one could never mistake Ward’s very modern digital artwork for throwback. It is so evidently of the now, and so the end-result is a sort of confident synthesis. The book reads like the most stylish and sleek contemporary sci-fi horror set underwater.

Aquaman is a character that’s long had immense potential. He’s the man of the waters. He’s the water god: Poseidon, Neptune, Varuna: he who commands the seas. And he is King. A mythic King named Arthur. As a writer there’s no shortage of ways to broach the character. Whether it be through an Arthuriana Lens (Rick Veitch), a Superhero Lens (Geoff Johns), a Pulp Adventurer Lens (Jeff Parker), a Political Drama Lens (Dan Abnett), or even a Mythic Demigod Lens (Kelly Sue DeConnick). The character’s inherent conceptual basis lends itself to a multitude of varied possibilities. There’s no limits.

And yet it feels like the character’s long been shackled. He’s never been afforded the kind of ‘prestigious’ or ‘evergreen’ work or efforts that for characters like Batman or Superman are just standard practice. He’s never been given such attention or care. It’s why there is no real self-contained, accessible evergreen Aquaman text like there is with Batman or Superman. But that also means there is room here. There’s a gap to be filled, with possibilities and potential in this absence. And that is really what Aquaman Andromeda leans on, exploiting the absolute potential of Aquaman as an Idea and mining the mythic power of his image and his world.

You look up above and see Ward’s work, or you flip through the book, and you will find a plethora of powerful, magnificent imagery that takes full advantage of the oceanic setting and its eccentric elemental hero. It’s a book that is deeply rooted in the binding nature of the hero and his element, which is why learning that the book was written to the Hans Zimmer OST of Dune should be no surprise. The book is about how this man is bound to this place, now and forever. The oceans of the world are Arthur’s Arrakis.

And doing a full on committed sci-fi horror drama set underwater? It’s about as far as one could imagine from what an Aquaman book is ‘supposed to be’. A fact I’m sure will bother Superhero Diehards who are insistent on their nigh-exclusive Meat & Potatoes consumption, but to others should prove refreshing. This is a work reaching out to a wider audience, far bigger than your average Wednesday Warrior or Direct Market devotee.

And there’s a strange synchronicity here as well, as even director James Wan is returning to his horror roots and re-broaching the next Aquaman through the lens of horror. Now, Wan’s approach is evidently not the same. Wan’s going for a ‘campy’ horror approach, which fits his sensibilities nicely, as opposed to the more Ellis-ian ‘hard’ sci-fi horror drama of Andromeda. But one thing is clear:

Aquaman and Horror are a natural blend. And there’s room here. There’s space to explore. And that’s exactly what the team of Andromeda is here to do.

Ritesh Babu is a writer and critic whose work has been featured in publications including PanelXPanel, ComicsXF, and ComicBookHerald. To find more from Ritesh, you can follow him on Twitter here!