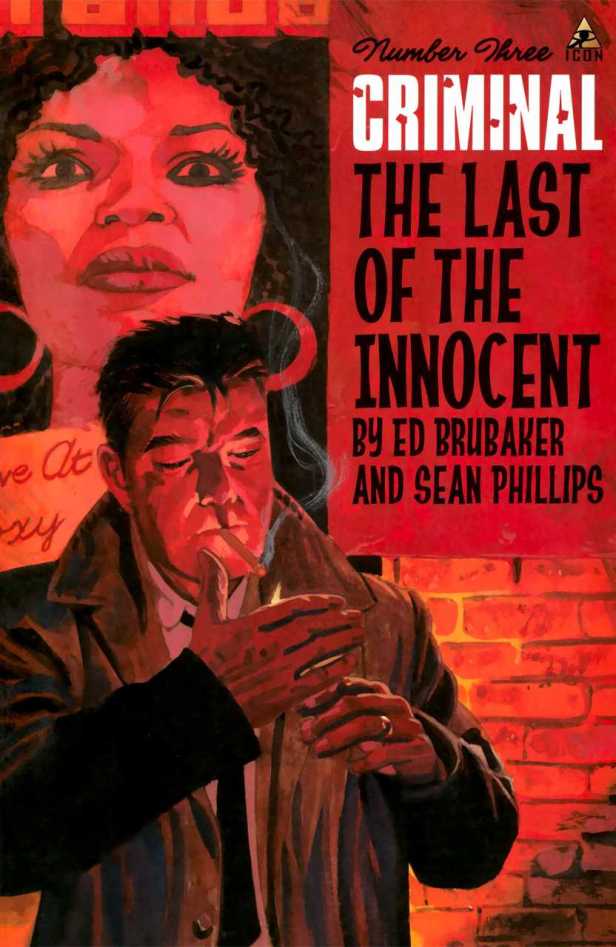 Sean Phillips and Ed Brubaker’s Criminal – a long-running crime noir comic following assorted lowlifes, megacreeps, and folks who have the luck to trap themselves in the worst corners of the world – is surprisingly playful for a consistently bleak comic. Criminal’s stories rarely end well for their protagonists: death is common; madness is not unfamiliar. Failure of all sorts is the name of the game. But as grim as the places Phillips and Brubaker have taken Criminal are, they’re consistently having a blast.

From the lines and shadows that Phillips uses to bring the comic’s hard-traveling cast to life through to the precise control of character voice that Brubaker uses to shape each story’s turn, Criminal is packed with the care and precision that marks a work done out of deep love for the form. But what really marks Criminal as a comic where its creators are having a ball is in its metafictional bent.

Comics play a big, big role in Criminal. One of its recurring protagonists draws a newspaper strip called Frank Kafka, Private Eye – a strip whose title character starts popping into the real world, greyscale coloring and all, as his artist starts to unravel. The graphic novel Bad Weekend follows the same artist earlier in his life, as he tries to keep a brilliant, heartbroken, vicious artist he once worked as an assistant to behaving… tolerably? During a major comic convention. Two specials, Savage Sword of Criminal and Deadly Hands of Criminal, weave together their primary stories with tales from in-universe barbarian and kung-fu/horror comics (complete with letters pages featuring writing from Phillips and Brubaker’s comics pals) read and reacted to by each special’s protagonist.

The most extended – and for my money the best – of Phillips and Brubaker’s formal experiments is The Last of the Innocent, a four-issue miniseries best described as “Archie through a mirror darkly.” It’s not a mean-spirited parody of the All-American Teen, but instead a thoughtful deployment of Archie’s style and rough shape. The story studies a man who is, for all his superficial similarities to Archie Andrews, as far from him morally as it’s possible to get. Archie can be clueless and a goof, but he is a deeply, deeply good person. Riley Richards is one of the worst people to appear in Criminal, a book that’s had plenty of monsters grace its pages

On paper, Riley should be happy. After all, he married the girl of his dreams—the sophisticated, ultra-rich Felicity (or Felix, as she likes to be called). He’s built a life for himself in the big city. But Riley is not happy. Not because his marriage to Felix has crumbled to the point where she’s been conducting a long-term affair with Riley’s high-school rival, or because his father is terminally ill. No, Riley is unhappy because he is a horrific human being, an endless black hole of want. What he has inevitably loses its luster. It’s all so much more complicated and frustrating than just getting what he wants.

What Riley wants; what he could have; what he remembers having had when he was younger; is so sumptuous and gleaming to him that Phillips and colorist Val Staples jump art styles from the heavy shadows and dark colors to a sinister pastiche of the Archie house style – since Riley finds some stress relief in old comics (albeit comics closer to the ones Phillips and Brubaker would later homage in the Savage Sword and Deadly Hands specials) and the fantasy that life was so much simpler in his younger days. It’s bright, it’s colorful, it’s elegant in its simplicity… and it’s terrifying in the way it reveals Riley to be, to paraphrase Grant Morrison, “the hole in things.”

The Last of the Innocent follows Riley as he decides to get clear of two things: the debt he owes to one of Criminal’s recurring power players, and the life that no longer satisfies him. He wants his childhood friend Lizzie (the “Betty” to Felix’s “Veronica”) and he wants to be rich without even the token job Felix’s father got him at the family company. He wants to indulge in the city’s vice without the threat of Criminal’s recurring legbreaker Teeg Lawless plying his trade on him. He wants to start all over, to make the right choices, the ones that will get him everything. All he must do is murder Felix and ensure that her will (which will leave him with a substantial fortune, to say nothing of property and stock in the family company) triggers properly. So, he does. 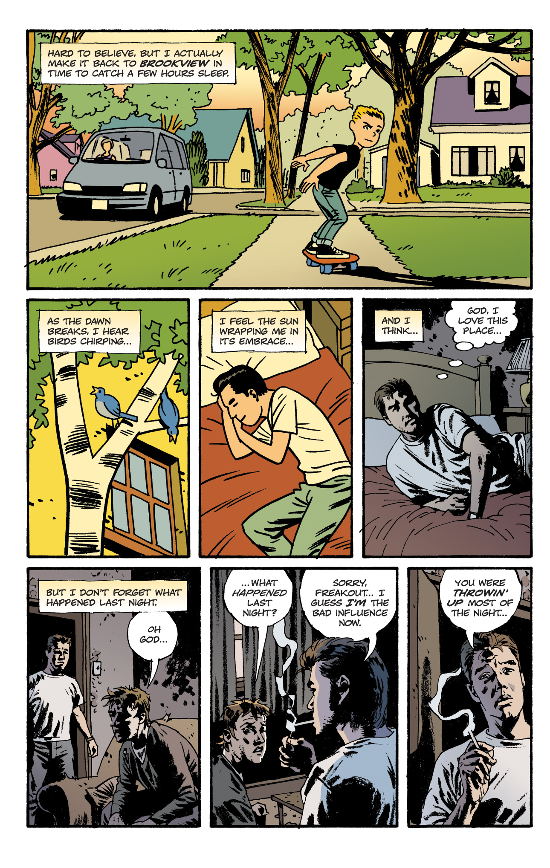 Issue three, in which Phillips and Brubaker make the extent of Riley’s venality clear, opens the day after Riley manipulates his childhood friend Freakout (AKA Jughead) into falling off the wagon – as a means of creating an alibi for himself – and murders Felix.  Phillips draws Riley as the idealized, Archie-style self that represents his endless want and his callow fantasies as he stirs from his slumber, in love once more with his hometown and largely content. But when Riley wakes fully, Phillips shifts back to Criminal’s regular style, since he feels a smidgen of genuine guilt about breaking Freakout’s hard-earned sobriety – enough humanity to make his remorseless commitment to being the endless engine of fulfillment he wants to be all the more horrid.

Most of issue three is told in Criminal’s regular style, but there’s a critical hop into pastiche right before what I consider the key moment in The Last of the Innocent. Riley successfully pins Felix’s murder on the man she was cheating on him with – his high school rival Teddy – and for good measure frames him for a series of unsolved serial killings that plagued their hometown during their youths. When Teddy is arrested, Riley goes to visit him, the better to sell himself as a grieving widower.

Before their confrontation, Phillips and Brubaker cut to pastiche as Riley remembers a time that Teddy one-upped him. He ignores the reality of what happened (Felix, being a jerk herself, was playing them off one another for fun) and focuses on the insult. Because Riley cannot stand to be – and indeed can barely conceive that he ever might be – anything other than A-Number-One for an instant. He cannot stand the light shining on anyone else. He wants that validation, a want whose gravity is so complete that it might as well be a black hole. Phillips and Brubaker seize on that moment, on the dissonance between the life Riley wants and the life he’s living whether he understands it or not, for a really spectacular bit of character work.

Riley wants to dramatically ask Teddy “Why?” He wants the police to see the grieving widower and subtly rub his old rival’s doom in his face. But he overplays his hand and makes his true desire clear. Riley doesn’t ask “Why did you murder Felix, Teddy?” He asks, “Why did you only ever want what I had?” Teddy, in his fury, spots the thread and realizes Riley framed him. Riley, in response, breaks into a sneer – but a sneer which Teddy wipes away with a scathing observation:

“Riley Richards, everybody’s All-American boy… You know what Felix said? When we were having pillow talk? That you were empty… Said when no one was looking, you didn’t even exist.”

When Phillips cuts back to Riley his sneer is gone. In its place? Anger. Anger and uncertainty and just a hint of fear. He tries to brush it off, but Brubaker’s scripting makes it clear that Richards is rattled: “That’s… the weirdest complaint I’ve ever heard.” Riley’s pause and attempt to downplay what Teddy has said come together with his expression to become the key to him.

Phillips and Brubaker use their Archie pastiches to illustrate just how shallow Riley is. The pages themselves are vibrant, full of life, full of narratives and dimensionality that Riley either doesn’t notice at all or only notices in retrospect. But even when he does notice, they don’t really matter to him. All that matters is what he wants. Phillips illustrates this chillingly in The Last of the Innocent’s fourth and final issue with one of the most horrifying final pages I’ve ever had the pleasure to encounter, but it’s the jump between Riley’s self-serving memory and his confrontation with Teddy in issue three that makes the moral monstrosity of his all-devouring want clear. Phillips and Brubaker reliably bring their all when working on Criminal. The Last of the Innocent’s third issue may be their finest hour – a beautiful, scathing study of a hollow man.

Justin Harrison is the film editor for The Spool, with bylines at NeoText and AIPT, among others. He’s tinkering with a visual novel. For more, you can find Justin on Twitter here!