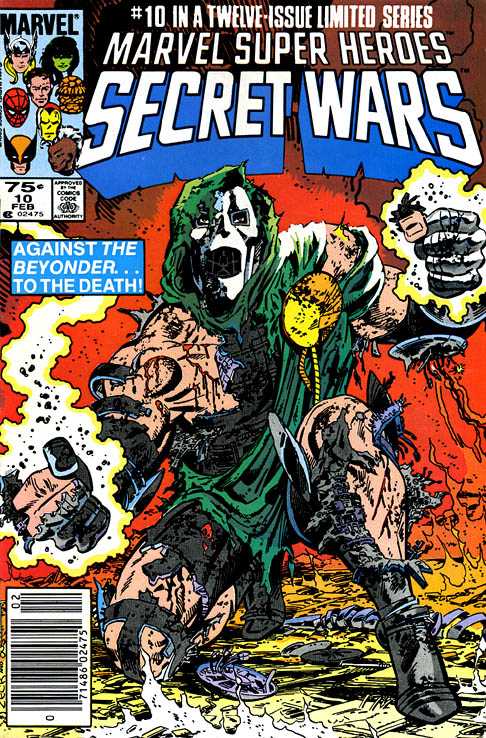 Welcome to Shelfdust Presents: The War Effort, a special twelve-part podcast which will see our cosmic host Al Kennedy joined by some of the best voices in comics podcasting and criticism as they wisely attempt to revisit, recap and reassess every single issue of Marvel’s Secret Wars series from 1984! Can the combined might of Earth’s most powerful comics podcasters defeat the ultimate menace?? Over the next twelve weeks we’ll try to find out!

Dr Doom is very interested in the idea of beating up god and stealing all his stuff, which means it’s time to talk about issue #10 of Secret Wars! Al joined by special guests Kelly Kanayama and Chloe Maveal to discuss the particular sound that Reed Richards’ bones make, The Thing’s poetic side, and what it’d look like if Magneto were a fashion Influencer with a grudge. Also Doom fights a god, if you’re into that sort of thing.

The War Effort is produced by the immensely talented Dave Bulmer, who you can follow on Twitter here. Our logo comes from the tremendously gifted mind of James Wendelborn, who is on Twitter here. Thank you to them both for their incredible work – give them a follow!

Al Kennedy is the host of podcasts House to Astonish and Desert Island Discworld, in which he sits down with special guests to talk about their work, their career, and the Terry Pratchett novel they would take with them if they were cast away to a desert island. He’s also been a featured writer for Shelfdust, and you can find his byline here! For more from Al, you can follow him on Twitter here and follow Desert Island Discworld on Twitter here.

Kelly Kanayama is a writer and comics scholar who is literally writing the book on Garth Ennis. Don’t believe me? Have a look at her Patreon page here! You can also find Kelly on Twitter here!

Chloe Maveal has written all over the comics internet – including pieces published by Polygon, WomenWriteAboutComics and The MNT.  Chloe’s also the Culture Editor-at-Large for The Gutter Review. You can find them on Twitter here!