“You think your life’s the big story but then you bump into somebody who really got it together, somebody serious – an’ it turns out you’re no more than a chapter in their story, you know what I mean? It shows you just how small you really are.”

There’s so much Star Wars stuff! Even if we limit ourselves to the comic-books there’s practically enough of them to fill a galaxy. And amongst the hundreds and thousands of ongoing series and limited series and crossover and graphic novels and movie adaptations and manga collections and one offs and digital-first stuff and toy tie-ins… there was a little anthology called Star Wars Tales.

It ran for twenty four irregular issues from 1999 to 2005 and featured all sorts of comics people: Sergio Aragonés, Jason, Peter Bagge and many more. As of now – whilst the comics license belongs to Marvel –  the series hasn’t been republished, which means if you want to find our story of the day you’ll have to bin dive like Scrooge McDuck or go digital.

In Star Wars Tales #10 the cover story is called “Trooper”, written by Garth Ennis, drawn by John McCrea, inked by Jimmy Palmiotti, colored by Brad Anderson and lettered by Steve Dutro. At this point your eyes might suffer a bit of whiplash as they snap to the beginning of the previous sentence. No, your viewing orbs do not deceive you, nor is there another writer with the same name. This is Indeed Garth “King of the War Stories” Ennis. This was the first of two shorts he contributed to this anthology, after which he was never seen again in a galaxy far far away. Just like Jar Jar Binks.

Which makes sense. As weird as it is to see Ennis taking a crack at writing mainstream superheroes (even though he can be decent at it) it’s even weirder seeing him trying his hands in Star Wars. I just can’t imagine young Garth going out of that cinema in the 1980’s pleased and elated from all the scene of space battles. He probably found faults with the terrible battle tactics of both sides (“why do to AT-AT Walkers only have front facing weapons?”) and all the space wizards are definitely distasteful to him. It’s called Star Wars, not Star Wizards!

So, as one could expect from title, cover image and writer, the story in question doesn’t really feature any Jedi or any of the other fantastical elements from the Star Wars franchise. Instead it’s a story of one storm trooper – another one of the nameless hordes that appear throughout the story only to be blasted away. Even though it’s his story and he narrates it throughout, our trooper doesn’t get the dignity of a name. He’s an extra even in his starring role. 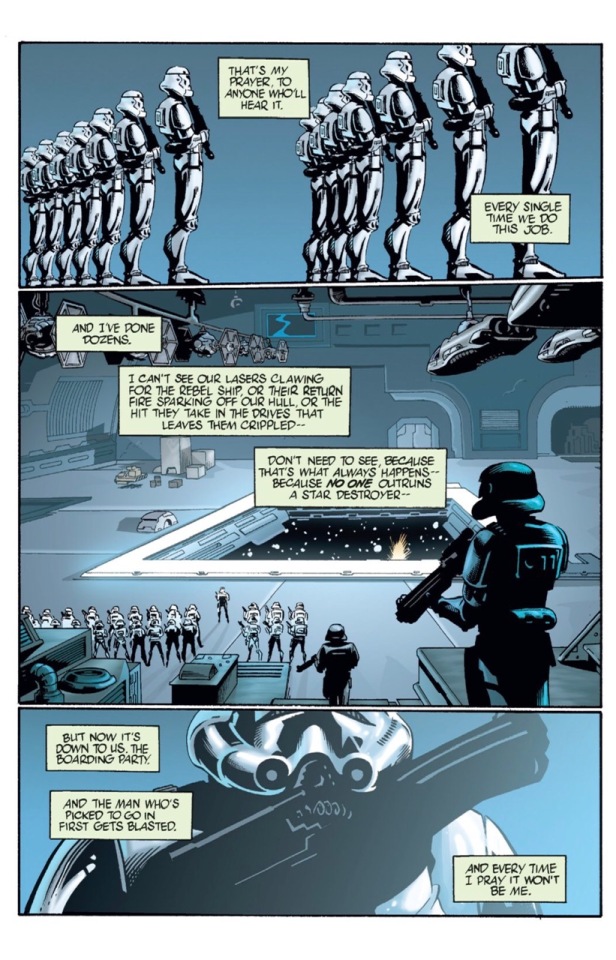 Our trooper is part of a boarding party that’s meant to take a rebel ship. As they prepare he frets over the possibility that he will be first through the doors. While the preparations take place he flashes back to his pre-Empire life in a harsh desert world, where working a simple life with his father was everything he’d known. The Empire comes and shows him the Galaxy is much larger, and cruller, than he could imagine and he makes a choice to join them. He spends the next several years doing horrible things – “I did my job. I followed orders”, he says.

In the present, he ironically and inevitably gets picked to go in first and immediately goes back on everything he ever did. He never really believed in what The Empire sold him; or, to be precise, he only believed it as long as he was on top. He swears that if he makes it through he would leave the Empire, thinking of another fellow who left to join the rebels instead. Trooper actually makes it through the first wave, surviving where many have perished. But then “the most beautiful girl I’ve ever seen shoots me in the face.“

That’s Princess Leia, we’re in the opening minutes of Star Wars: A New Hope; a nobody died and the main story rolls along. Our trooper was an extra, just a side character in someone else’s story.

Might this sound familiar? The idea of focusing about someone who’s a non-entity in a larger story is nothing new, of course, John Gardner’s novel Grandel retells the epic poem Beowulf from the point of view of the monster defeated in the first part of the story. Jorge Luis Borges’ “The House of Asterion” shows a befuddled Mintour as some Greek asshole invades his home. And, of course, Rosencrantz and Guildenstern Are Dead. In which Hamlet’s two old mates (who were such bit players their role were often abridged before Tom Stoppard made them famous) get center role – only to realize there’s something greater than them going on.

However, since this is comics we are talking about, I couldn’t help but notice the similarities to another famous four-color tale. A tale which also concerns a soldier taking on a particularly dirty job who ends his life being shot by the main protagonists of the story. The celebrated Invisibles (volume 1) #12 – “Best Man Fall;” some even say it’s one the best 100 single issues ever written.

The two stories make for interesting contrast. “Trooper” is a harshly cynical story where the narrator quickly adapts the Empire’s ideology of ‘power first’ – he thinks only in personal terms, no one else of importance exists besides him. He watches his father die without flinching and joins up with the very people who killed him – and then his first task is to execute someone else who had spoken against the Empire (someone he appears to have personally known) and he does it without hesitation.

As the story draws to a close and the trooper makes the decision to leave the Empire he doesn’t do it out of any moral turnover. Being sent first through the door, a certain death, made him realize the Empire doesn’t care about him, and they’ll throw his life away as easily as he threw his father’s. It’s his life he clings to, not his morality. Compare that to the protagonist of “Best Man’s Fall,” Bobby, who gets to have a life outside and behind his soldier mask. By the time his story is over we know not only his name, but also his current family and the circumstances (both psychological and sociological) that led him to current situation. We don’t have to sympathize with him, a wife beater who chose to work for a morally dubious organization as a foot soldier, but we empathize – we understand the path that took him there. As a profile of a person and a class it is masterful.

Morrison doesn’t ‘condemn’ the individual but the whole system that drove him down that particular path. It’s one of the first hints throughout Invisibles that the war the protagonists are fighting isn’t as cut and dry as it would appear. In Star Wars, however, things are as cut and dry as they first appear – the Empire is evil and the Rebellion is good. Which maybe helps to explain why “Trooper” is so cynical. Ennis had done many stories about soldiers fighting for the wrong side; War Stories: Jonah’s Tiger, Enemy Ace: War in Heaven and War Fury: My War Gone By all feature soldiers who grapple morally with their choice and always manage to find some justification, national pride, officer’s duty, commitment to their fellows in the unit, for going on with the war. The trooper goes to war because he wants to be the last one standing.

The Empire, at least in Ennis’ version, has a single guiding principle – the strong survive. The Trooper is first ordered to kill a man to test his loyalty, then he is expected to kill several of his fellow trainees to assure acceptance to the military. We see a climbing exercise in which a fellow trooper begins to fall, before our protagonist can reach out his commander shouts “Leave him! LEAVE HIM! Let him die and climb!” This is an absurd method to train soldiers – killing so many recruits per every soldier you produce, and treating that soldier as nothing more than canon fodder. One wonders why they haven’t kept up with the stupid droids. 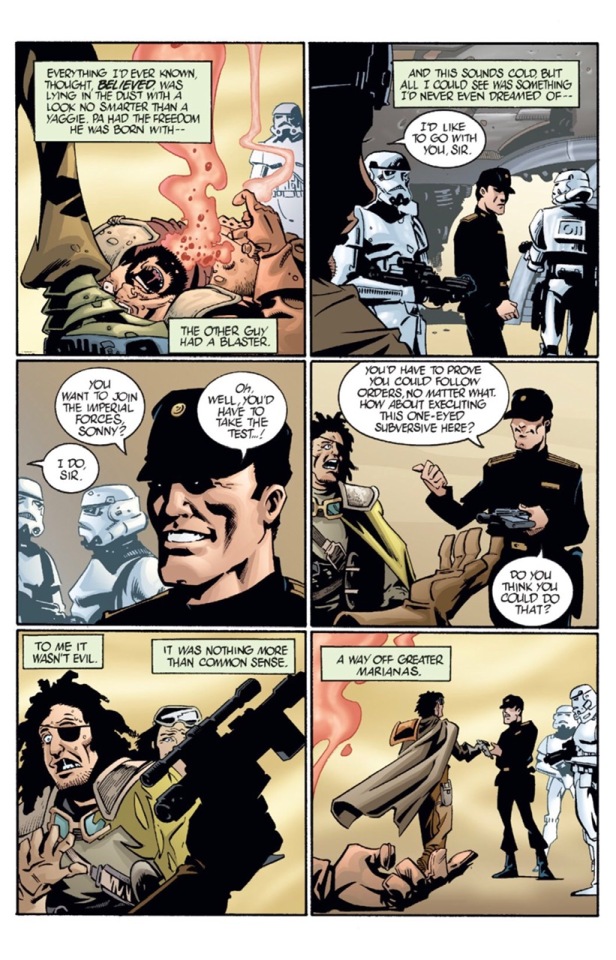 It’s little wonder our trooper jumped in on the opportunity to join – the Empire didn’t change him, it just showed him what he always was. “Best Man Fall” shows us how circumstances push someone towards evil, things both big (the economy, the national mood, the zeitgeist) and small (our family, our friends). “Trooper” show us that some people don’t need to be pushed; they jump in, head first, out of their own free will.

In an extremely telling scene we see other stormtrooper interrogating a prisoner who shouts that the Empire will lose because they are fighting against “Men born an’ living free under the stars!” This is an echo of something the Trooper’s father used to say and he goes temporarily berserk, shooting the prisoner in the face. He can’t stand being reminded of his past, being reminded what he gave up to survive, to be “the man with the blaster.” Because there is still something human inside, something the Empire, with their strict orders, and their Dark Side and their face-concealing individuality-erasing helmets can’t erase. But that something isn’t a beautiful soul, lost to its horrifying circumstances, that something is the man who sold his father and his friends without hesitation.

Ennis wrote about worse men. He wrote about war criminals, and sexual slavers and corrupt businessmen who could condemn thousands to death for a tidy sum. But he’d rarely write someone as loathsome – someone who gave in to power the moment it was offered (in the form of a gun) and became a blubbering wreck once there was a chance that power would be turned against him, praying for something he didn’t believe in to get him out of the very situation he put himself in. Someone who didn’t need that visor to see everyone else as targets.

There are people like Bobby out there. There are victims of circumstances who made one bad choice after another, from stupidity, from misunderstanding, from weakness. But there are also men like our Trooper, bad men, who leap head first at the opportunity to do harm to others. Perhaps we understand them; but that doesn’t mean we have to like them.

Tom Shapira’s writing has been featured on many different websites, ranging from PanelXPanel and The MNT right through to The Comics Journal. The best place to find him online is on Twitter, right here!