Hardware, real name Curtis Metcalf, is a genius inventor and superhero. When he’s brutally rebuffed by Edwin Alva, his surrogate father figure, mentor, and employer after he asks for a share of the profits from his inventions, he goes digging for dirt on the man in hopes of finding a way to retaliate. What he finds is evidence of massive criminal wrongdoing, but he’s unable to expose his boss through the media. Metcalf instead begins using his boss’s gear to build a suit of armor that allows him to take on Alva’s criminal empire personally: a dark knight feuding against his billionaire benefactor.

The first issue of Hardware is called “Angry Black Man,” and it has the kind of cliffhanger that demands you read the next issue, but is perfectly paced for the collection. It’s full of deft writing, considering that Dwayne McDuffie’s script has to burn through a lot of exposition to establish the character and his core metaphor. Denys Cowan pencils, Jimmy Palmiotti inks, Janice Chiang letters, and Noelle Giddings colors the issue, which is full of nighttime fights between people wearing black, complicated designs, specialized word balloons, and establishing shots to define the universe.

Hardware #1 is dense and it’s violent. It dropped in 1993, but it doesn’t really resemble the busy, Image Comics-associated artwork of the time, nor does it resemble the more traditional house styles of Marvel and DC Comics. Cowan and the crew gave the book a look that stands out to me and feels singular even in 2021, like the impact the early Marshal Law stuff had, or Richard Corben more generally. Not timeless, but not dated. Classic. It’s scratchy and busy in the most exciting senses of those words, and the really killer sound effects work from Chiang brings it all together for me.

That slightly abrasive/remarkable vibe continues into the writing, too. Metcalf is abrasive and mean, but he explains that he has a perfectly solid reason to be. He was deceived, trapped, and then caged. His escape is violent and flamboyant, filled with paramilitary units, killer robots, and a fair amount of maiming, but what else do you do when pushed to the edge? Malcolm X spoke of 1964 being the year where black people in the United States were going to have to choose the ballot or the bullet, where if you can’t secure your freedom by the methods established within a system, the only logical choice is to destroy it before it destroys you.

I was surprised when I reread the issue and got something completely new from it as an adult.

As a child, I appreciated the idea of your boss being a secret bad guy forcing you to become a superhero, but as an adult, I’m most struck by the selfish, personal reason that led Metcalf to put on the Hardware armor. Metcalf trusted and loved Alva like a father, and Alva nurtured that relationship in order to personally benefit from it. Metcalf thought that Alva had given him freedom, but he hadn’t. As Metcalf’s opening monologue explains, “My bird made a common error. He mistook being out of his cage… for being free.”

Metcalf discovered the dimensions of his new cage when his boss said, “You are not family. You are an employee. Neither are you heir apparent. You are a cog in the machine. My machine. You are not respected, Curtis. You are merely useful.” It’s an inversion of the CEO-speak you hear in jobs today, where we’re all a family in these unprecedented times, and the only way to get through it is to stick together, and the best way to stick together is to keep on doing your job exactly like you’ve been doing, even as friends and family drop around you.

Hardware, the series, is about a man who was promised ultimate freedom (there’s a suggestion that the money was an “escape” of sorts from his working class upbringing, bolstered by the idea of a glass ceiling being the thing preventing his rise) and discovered that he was only relegated to a slightly larger cage than his peers, a man who was literally and figuratively put in his place by his employer. The metaphor sings a song of trust and exploitation that many of us can relate to, and many more will unfortunately come to understand. Being paid enough to live is hard enough. Being paid what you’re worth is another matter entirely.

Freedom is a concept that’s only ever grown more important to me as I’ve grown older and learned the varied ways my freedom can be abridged. I should probably mention that my first and largest tattoo is the Swahili word for freedom, “uhuru.” It stretches down my forearm, from elbow to wrist. You could say I have strong feelings on the matter.

I’ve worked freelance and salaried jobs, and the trust between a worker and employer is something that’s often taken for granted and under-emphasized on the check-writing side. There’s nothing like that moment when someone messes up somewhere and your check is wrong, or worse, late. It’s a betrayal of the relationship between labor and management, especially for freelancers. Hardware #1 approaches that betrayal from another, deeper angle, and one that’s only ever become more important over the past few years: why should you get paid so much more than I do for something I’m actually doing?

The infamous “chicken nuggets” moment from The Wire, featuring future heartthrob movie producer Michael B. Jordan, is running on a parallel track to Hardware. You’d expect the person who does something amazing, something helpful, to benefit from it. It’s a natural idea, one that’s been subverted and smothered by the all-consuming pressures of capitalism. It’s why Hardware asks for a share of profits, and it’s why we’re offended on his behalf when he’s rejected in such a callous manner.

Later in “The Ballot or the Bullet,” Malcolm says, “How can you thank a man for giving you what’s already yours? How then can you thank him for giving you only part of what’s already yours? You haven’t even made progress, if what’s being given to you, you should have had already. That’s not progress.” The themes present in Hardware #1 are far from new. Metcalf thought Alva set him free. He was wrong. 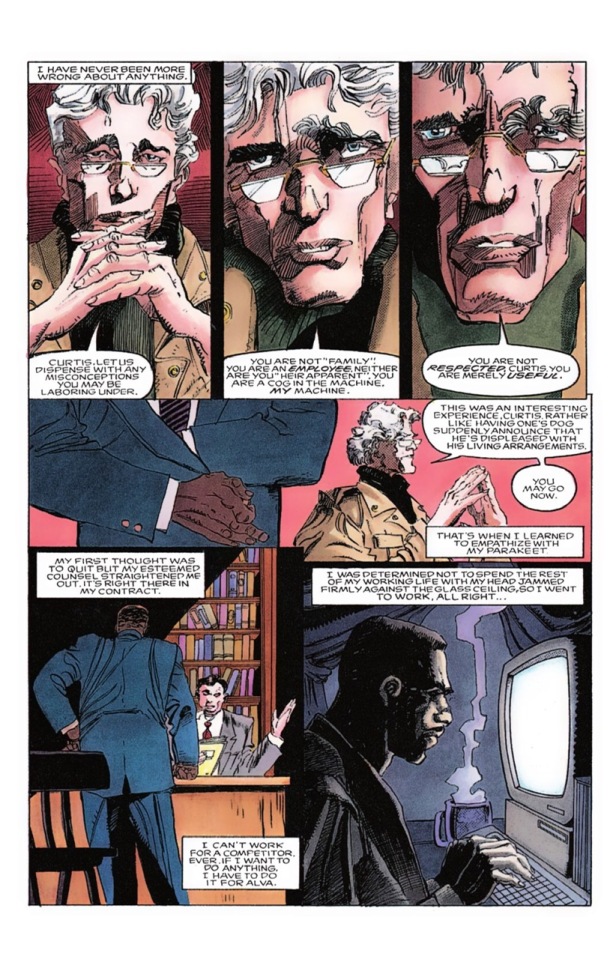 This idea of freedom was particularly thick in the early ’90s. Hardware #1 is cover-dated to April 1993. One year prior, with a cover date of April 1992, Rob Liefeld’s Youngblood #1 debuted, one of the books that launched Image Comics. Around the same time Cowan was getting a lot of attention on The Question with Dennis O’Neil and McDuffie was working on a string of low-key but remarkable projects at Marvel, a crew of superstars discovered, like Hardware, that they were merely useful to the powers-that-be. Liefeld, Jim Lee, Whilce Portacio, Marc Silvestri, Erik Larsen, Jim Valentino, and Todd McFarlane were working on some of the biggest titles at Marvel, laying the groundwork for massive sales. Rather than continue donating their time and ideas to their bosses, they took their fans and reputation to Image Comics, a new publisher explicitly intended to support and publish creator-owned work.

Metcalf took an extreme route, with guns and violence to express his displeasure. The Image founders took another, equally extreme route. Image Comics, as an institution, owns nothing but the Image Comics logo. The creators own everything, from the media rights on down. It isn’t just about comics, either. I worked at Image for a few years, and in my capacity as editor of the in-house magazine, every writer I worked with retained complete ownership of the work they did for me. There’s no other publisher with a deal like that, and that suggests something about the level of disrespect the founders felt, doesn’t it?

While Image Comics was designed as a vehicle for creative freedom to benefit the creators published there, Hardware #1 was a vehicle for the creative team to explore the ideas of creative, mental, and physical freedom through an allegory so direct the word is almost insufficient. Metcalf’s struggle as an inventor and employee is blended with the ongoing, real-life struggle for our humanity to be recognized.

It’s a very pointed thing that he’s “rescued” from humble beginnings by a wealthy white man, just as “Angry Black Man” is quite a title for a first issue. The team behind Hardware #1 have taken a very real and very common real-life issue and added a violent superheroic edge to it. It obfuscates the reality just enough to create a really fun yarn about a man in a robot costume, but if you scratch the surface just a bit, if you give the allegory its due, you’ll find something that’s aimed directly for your heart.

The main thing I take away from Hardware #1 is the same thing I take away from the founding of Image Comics: you deserve more. You deserve more than you get, and unfortunately, the system is rigged to keep you there. This inequality trickles down into your personal life, where you’re too tired to spend time with your loved ones, too broke to get things that would help improve your life, and always a text message away from being on the clock. But it’s vital that you learn to perceive the shape of your cage, like Hardware, because that’s when you begin to discover your way out. Sometimes asking nicely helps. Other times… well, who would say no to a nice suit of armor?

David Brothers is fate’s cold breath upon your shoulder. You can find a listing of all his work past and present over on his site here, and follow him on Twitter here!

One thought on “1993 in Black Comics History: Hardware #1 by Dwayne McDuffie and Denys Cowan”