The Dust To Dust column runs every week on the Shelfdust Patreon page! To read more, head to our page here! Spoilers below, of course: we’re talking about the last issue of the run! 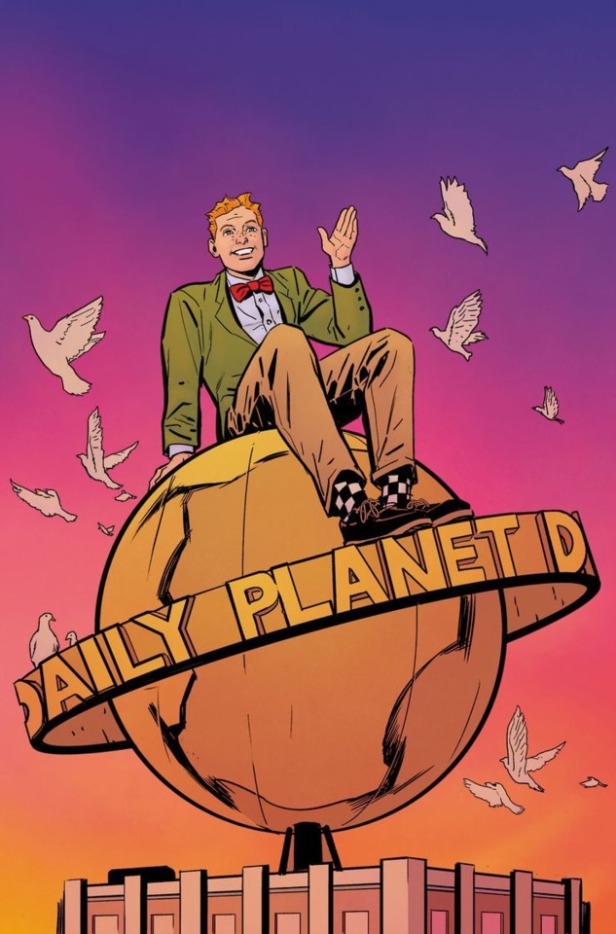 As readers, we have to suspend our disbelief whenever we read superhero comics, which disconnects us from the real world happening all around us, whooshing past our ears in a bright red cape. Superheroes have fantastical powers, fight impressive villains, and live unbelievable and magical lives on the page. By embracing that there are going to be silly and strange things going on, we surrender past the real world and allow ourselves to jump into whatever adventure the printed page has to offer us. The result is that comics give us endless opportunities to find something new and amazing – as long as we can believe the impossible.

But that aside, I can’t believe that The Daily Planet still exists.

In an impossible and wild universe filled with aliens, talking gorillas, robots and ghosts, the continued success of an old-school newspaper remains the most unbelievable part of DC Comics. They have a single editor, roving reporters who run to the scene of the crime to report stories, and publish print editions. In the service of Comics™ I can suspend my disbelief at so many things, but The Daily Planet is one step too far.

It’s been a problem for DC over the years, as journalism has essentially fallen apart in a fundamental way. Most newspapers now operate at a loss, sustained by elusive billionaire owners who use them as primary forms of propaganda for whatever form of capitalism they think the public should be worshipping at any one point in time. Yet The Daily Planet is as fundamental to Superman as Lois Lane or Kryptonite. Writers have tried everything to keep Clark Kent’s day job feeling authentic and likely, to little success. Sometimes they turn him into a blogger, sometimes they move him to television: however real-world journalism changes to go after the money, so DC Comics have attempted the same in the hope they can keep Superman’s character in-touch.

Newspapers simply don’t have a reason to exist in our digital world, where people get their news via social media, streaming news channels, and John Oliver. Much like… well, comics, print news is an industry being kept alive through artificial means. And as print falls lower every year, editors at DC Comics must have panicked more and more about what they were going to do about Superman. Could Clark Kent set up a Patreon page to fund freelance journalism maybe? What if he got a Substack account and published that way? With dwindling options, it seemed like The Daily Planet was a dated and cremated relic of the past, which the comics would have to move past. 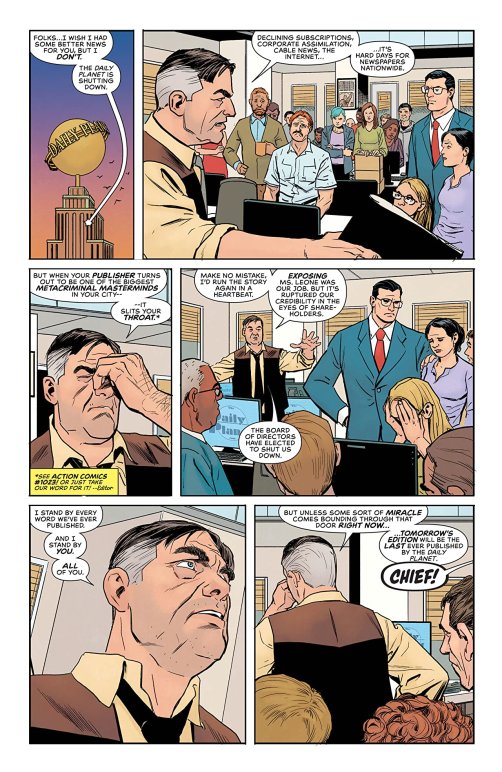 Step in Matt Fraction, Steve Lieber, Nathan Fairbairn and Clayton Cowles, who managed to restore The Daily Planet in a substantially believable and renewable way across the course of twelve issues. Superman’s Pal, Jimmy Olsen is fragmented to a granular degree, portioning out sections of story in a precise and mannered form so readers have to read the whole thing in one go – several times – to understand the entire point. There are myriad small details in the journey of Jimmy Olsen from unemployment to publisher, but what strikes me most about the run as a whole is how it restores The Daily Planet and celebrates the importance of journalism whilst understanding how journalism actually works in the modern age.

This is clear from the start, as we find out that the newspaper is – naturally – running at a massive loss, with its old-school approach yielding huge expenditure and no benefit. But the one part of the operation which still makes money? Jimmy Olsen, whose wreck-filled approach to daredevil reporting means trying experimental formulas, chasing the chaotic, and wrecking huge parts of the city at a time – all before the eyes of a staggering viral viewership. Preceding Jackass Forever by a few years, the series recognised that Jimmy Olsen’s decades-long career as a comics character led him to be an obvious internet sensation. He’s known to be the character who tries strange things, and in the era of the internet there’s nothing that gets more attention than someone doing something strange. Jimmy is a walking comment section: and with that, a magnet for traffic.

Unsurprisingly for Jimmy, things go awry. By the time we reach the final issue his life is in tatters, as his brother is revealed to have tried to kill him for the family inheritance, orchestrated from the background by long-term family nemesis Lex Luthor, who wants control of the city for itself. But Jimmy’s life isn’t the threat readers are hanging on to at this point: instead, the hook for the entire series has become the newspaper. The issue starts off with a distraught Perry White telling the staff of the paper (including Lois Lane and Clark Kent) that the directors have decided to shut their publication down because it makes no money. There’s no life-or-death cliffhanger or giant alien threat for a fantastical superhero to gloriously defeat: this is going to need a little guy who can stand up against the billionaires.

Which, again, is why this series shines. It understands the way the world works, and uses our real-world situation to inform a fictional disaster for Superman. He can’t punch his way through this – sometimes what we need is a Jimmy Olsen. And through the actions of the people, The Daily Planet is eventually saved. It takes a series of freak coincidences, cannily set up throughout the rest of the series by the creative team, but the grand finale of the story sees Jimmy Olsen square off against Lex Luthor. Luthor has all the power and is in his office when Jimmy arrives, and it’s through luck, ingenuity, and a little journalistic trickery that that balance of power shifts completely by the time the scene concludes.

Sure, Jimmy isn’t really the little guy – his family have had power in Metropolis for centuries, and he’s old-old money in this game. But the series approaches him as the little guy, hiding his fortune even from him, so he genuinely does have to work a job in order to keep afloat, and putting him on the ground floor as a man of the people. And he is, at heart, a reporter, despite the madcap antics which make up most of his time on the beat. When he takes down his brother earlier in the issue, there’s a panel which shows Jimmy pulls out his camera to take evidence at the same time a police officer pulls out a gun to force an arrest, which gives equal weight to both acts. The policeman puts Jimmy’s brother behind bars, but it’s Jimmy’s front-page photograph which ensures that his brother will actually stay behind bars. 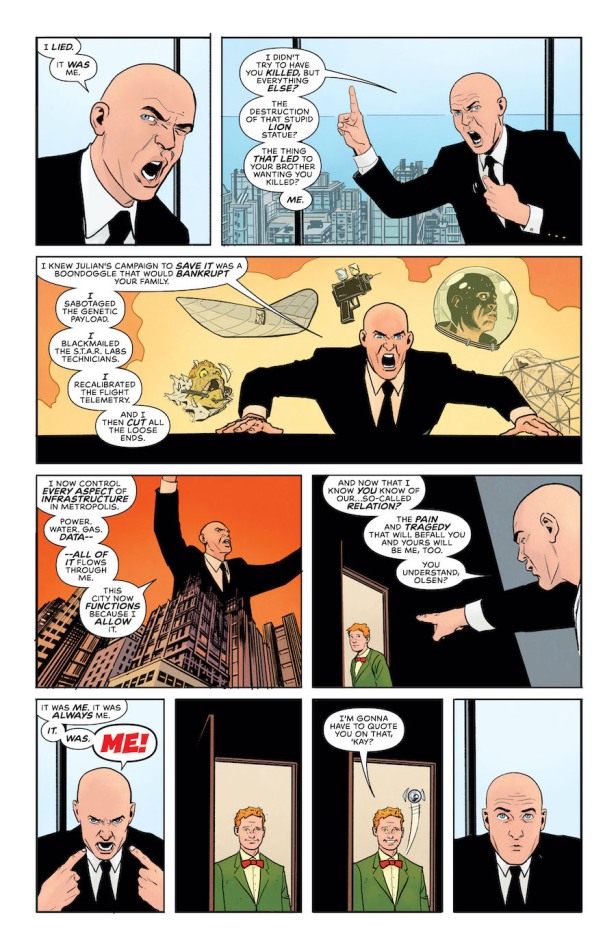 That same instinct leads Jimmy to beat Luthor. After baiting Luthor into a grandstanding reveal of all his criminal planning across the course of the series, Jimmy reveals he’s been recording the entire conversation. It’s not quite journalistic integrity to record someone without consent and then publish – but for me, it was easy to suspend my disbelief for it. Jimmy gets funding from Luthor, but also a revenge centuries in the making. In the process he ensures that The Daily Planet will be funded forever – giving it a reason to exist in DC Comics that makes sense. What unites every print paper in the real world? They’re funded by a shady billionaire. And now The Daily Planet is the same, albeit a shady billionaire who is blackmailed into submission by Jimmy Olsen, man of the people.

When the issue ends with Superman flying down to thank Jimmy for his work, it works so well because we know that Superman is genuine. Jimmy solved a problem nobody else in the world could have done, and his aw shucks brush-off of Superman’s gratitude reads true to the character. The DC Universe is a mad place to live, and nobody has a wilder life than Jimmy Olsen – but it made complete and perfect sense that his life was exactly what everybody needed in order to keep everything in perfect working order. Next he’ll have to unionise.

The Dust To Dust column runs every week on the Shelfdust Patreon page! To read more, head to our page here!