There are so many X-Men out there! You can’t walk round your private island paradise anymore without bumping into twenty mutants. But that raises a question which Shelfdust are going to try and answer! Who is the Best Mutant? We’ll be inviting some of the best writers in comics to argue their case!

Jean Grey is the Atomic Eve of the X-Men. She was there at the very beginning, a young girl walking through the doors of the Xavier School for Gifted Youngsters for the first time in Uncanny X-Men #1. She was there at the very end, now the White Phoenix of the Crown, cosmically amputating a dystopian timeline to give her loved ones a better future in New X-Men #154. An Omega-level telepath and founding member of the X-Men, Jean Grey once saved the universe – before she almost destroyed it. The best X-Men story ever published (hell, the best Marvel comic book, period) is a saga named after her. Call her Marvel Girl, Phoenix, Black Queen, Dark Phoenix – Jean Grey is the Best Mutant.

What comic can I use to prove it? Uncanny X-Men #137 is an era-defining classic, but Shelfdust’s already covered it. X-Men: Red #1 is a re-introduction to Jean after being dead for several years, but I’ve covered it. In Uncanny X-Men #108, Jean repairs the M’Kraan Crystal and saves all creation, but the topic is Best Mutant, not Best Phoenix Host. (But that’s her, too.) Better to focus on an issue that’s not about the Phoenix, Jean’s many deaths, or even the (finally consummated) love triangle with Cyclops and Wolverine. How can I wipe all the “JEEEEEEEAN!” screams and fainting memes from everyone’s minds? I need to pick a deep cut.

X-Men #28 (1994) was in the first stack of comics I ever read as a child, riding high on Happy Meals and the 90s X-Men animated series. Decades later, Andy Kubert and Matt Ryan’s cover featuring Jean Grey and Sabretooth still lingers in my mind. The art is a beautiful sample of spine-breaking 90s superhero excess: big hair, big claws, big…logo. But the cover is surprisingly direct and uncluttered, its imagery sticking a pin in my subconscious long before I could emotionally decipher it. Kubert’s artwork is pure Beauty vs. The Beast (not that one), Sabretooth looming menacingly over Jean in front of a stark white background. Their poses are a violent inversion of the swooning figures I saw on my grandmother’s romance paperbacks. Sabretooth is snarling and almost supernaturally huge. Jean, despite her magnificent mane of hair, looks small and surprised. Beast looks like he’s going to rip Beauty’s heart out.

Written by Fabian Nicieza and drawn by Kubert, “Devil in The House” sounds like a horror story, and in a way, it is. Jubilee wakes up from a nightmare in which Sabretooth killed the X-Men, saving her for last. (“What can firecrackers do against an atom bomb?” asks a narration box, while Jubilee can’t even rely on her mall babe bluster.) Jean senses the young girl’s distress and comforts her before telepathically summoning Cyclops, Storm, and Beast for a 2 a.m. meeting away from the Institute. Jubilee isn’t afraid of a monster under her bed, but she is terrified of the monster in the basement – Professor X’s patient-slash-prisoner Sabretooth.

Jean Grey is approaching a significant turning point – in X-Men #30 she marries her longtime love, Cyclops whilst Wolverine, the other love of her many lives, is gone. His absence is deeply felt in this issue as the team are still reeling from the skeleton-stripping events of “Fatal Attractions.” (Cyclops admits, “I can see how that excitement appealed to you…you and [Wolverine] always shared that passion for life,” which in retrospect becomes another stone in the path leading to those three interconnected bedrooms in the Summer House.) If Wolverine is an emotional wound for Jean, then Sabretooth, his dark double, is the salt rubbed into it. As Professor Xavier tries to rehabilitate Sabretooth, a quandary emerges. What responsibility, if any, do the X-Men have for this ruthless, unkillable killer? 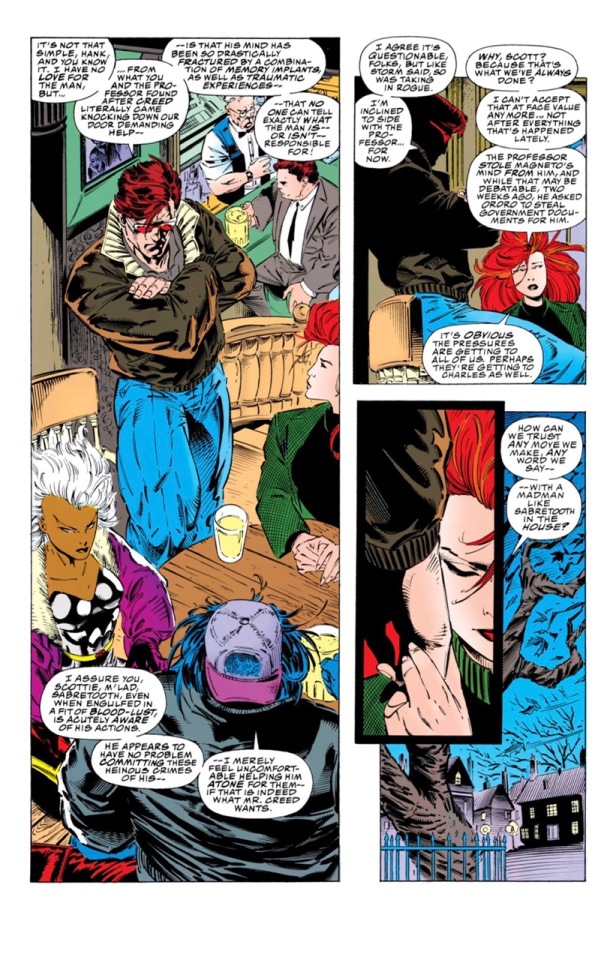 Cyclops sides with Xavier, implicitly trusting his father figure. “Why, Scott?” Jean pushes back. “Because that’s what we’ve always done?” Jean can’t take his word at face value anymore. Even without the Phoenix, Jean Grey represents change, transformation, and the rebirth (or perhaps the better word is rebuilding) of the self. She isn’t the teenage girl who walked through the Institute’s doors all those years ago, and when she interrogates Xavier directly, she’s angry. I could argue that Jean is also Xavier’s best student, because the inheritors of his dream should be the ones who question it.

After so many recent losses –Illyana Rasputin’s death, Colossus’ defection, Magneto’s attack on Wolverine – the X-Men are especially vulnerable to Sabretooth’s malign presence. Jean understands, deeply and personally, how quickly darkness can corrode even noble hearts. “How can we trust any move we make, any word we say – with a madman like Sabretooth in the house?”

What is visible on the page, if not directly stated in this Comic Code-approved issue, is that Sabretooth is specifically a threat to the women in the house. He assaults Psylocke by grabbing and forcibly kissing her. When he talks about Jean giving him the glow (a shot of psychic morphine), he taunts that he can “give it to her, too.” And while he can’t physically harm the invulnerable Rogue, he pulls a Hannibal Lecter and taunts her with his intimate knowledge of her new beau Gambit’s seedy past. It’s possible that neither Xavier nor Cyclops fully grasp this danger the way Jean does. Jubilee’s nightmare about a predatory Sabretooth is even more sinister in this context, and Jean, the woman who comforted her, is the one who confronts Sabretooth face-to-face.

We finally arrive at the final act fight promised by the cover. In costume, Jean comes to Sabretooth’s cell to give him his psychic “treatment.” Sabretooth snarls bad guy cliches (“I knew you’d come, Red” “Logan an’ me were two sides o’ the same coin”), and they sound dull and ineffectual even before he leaps at her and slams into the invisible security grid. Their roles on the cover are suddenly reversed; Sabretooth sizzles on the floor with Jean hovering above him, her body haloed by pink psychic energy. The misdirection here is extremely cathartic — how small he seems now, under the cool gaze of her judgement. How badly he’s misunderstood her. Jean’s affection for Logan and her desire to protect her teammates are what make her strong and, frankly, terrifying. X-Men #28 gives Jean Grey one of her most character-defining moments, all within two lines: “You’re a firecracker, Creed…and I’m an atom bomb!” 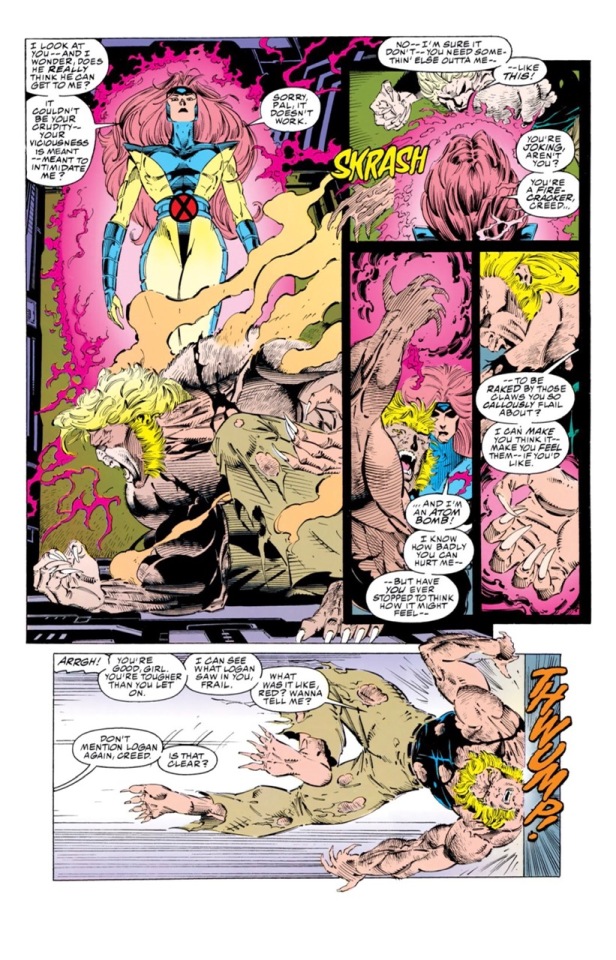 As a mutant, Jean Grey is an explosive combination of incredible power and intense passion. (I could even say there are two Phoenixes inside of her.) The physical fight with Sabretooth is over before it begins, Jean symbolically defanging him as her telekinesis slams him around his cell. The challenge to the mutant monster was also a challenge to surmount the anger and fear boiling inside her. It is easy to be cruel like Sabretooth, ruled solely by bestial appetites. Jean herself once hungered so badly that only a sun could sate her. And there is hard steel behind her fire, as she demonstrates how easily she could relieve Creed of his agony or make him feel the pain he inflicted on his victims.

Other X-Men would probably be satisfied by knocking Creed on his ass. Jean does something more — the real psychic blow is the challenge she gives him as he lies at her feet. Now that he knows he doesn’t scare her, does he have the guts to stop running and face up to his crimes, to be better than what he is?

The next morning, Jubilee insists on giving Sabretooth his breakfast to overcome her fear of him. She finds the monster from her nightmare calmly meditating in his cell, and he tells her that “Red” was the one with “real guts.” Standing on the threshold of her new life with Scott, Jean confronted a killer and still offered him a choice, the possibility of transformation, whether he accepts it or not. One of the most powerful mutants on earth, Jean Grey possesses a fiery temper and a compassionate soul. She chooses to use her power to protect the people she loves, even when struck by the very human emotions of anger, doubt, and fear. She shows us that we can rise again and challenge the darkness.

Kayleigh Hearn is the comics reviews editor for WomenWriteAbout Comics, and has written for publications including The MNT and Deadshirt. You can drop some money in her Ko-Fi account right here, and follow her on Twitter here!