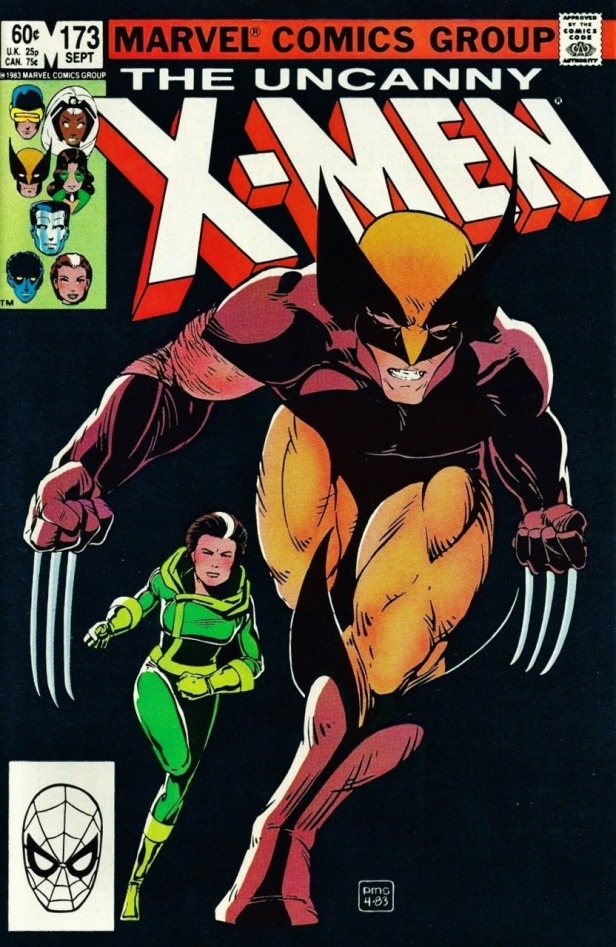 Earned or not, Chris Claremont has a reputation as a verbose writer. His action beats are peppered with such stalwart descriptives as “I’m the best there is at what I do,” “No quarter is asked – and none given,” and “Bang…you’re dead!” Which is why the fight sequence between Wolverine and Silver Samurai on pages eleven to thirteen of Uncanny X-Men #173 feels so unique: Claremont shuts the hell up and lets Paul Smith tell the story.

The three pages each have four wide, horizontal panels framing the action, their background a uniform red, reflecting Wolverine’s mental state. He’s not in a berserker rage, but he is seeing red, and only the Samurai matters. There’s also nothing distracting the reader from the two central characters: no flashy tricks, no breaking the panel borders. Our eyes focus only on the combatants and the snapshots of their combat. 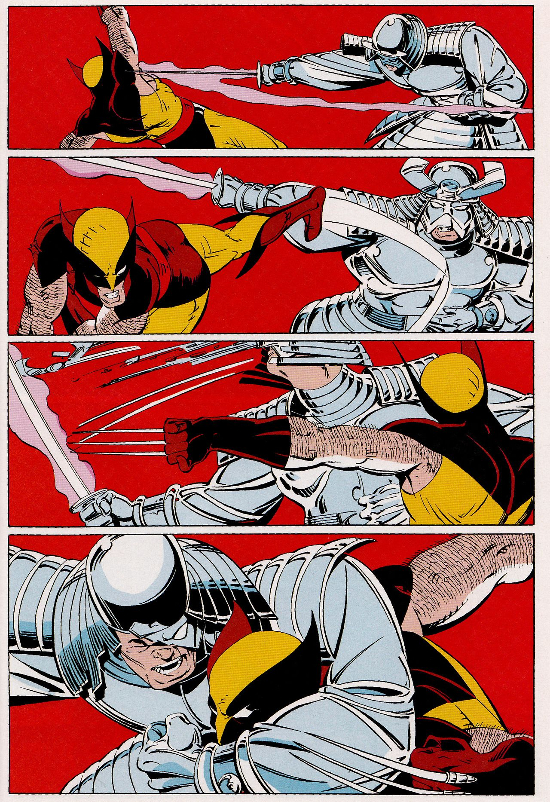 The Samurai swings his blade toward Wolverine, its energy signature drawing a line through the air, giving motion to an otherwise static image. Colorist Glynis Wein chooses a light pink to delineate the energy, bright enough to differentiate from the background as well as Wolverine’s tan and gold and the Samurai’s silver.

Wolverine slashes the Samurai’s face and destroys most of his mask in panel three. Smith smartly stages the attack so that the Samurai’s head is almost entirely off-panel, sparing the reader of the implied gore. The same happens on the next page, where Wolverine is run through by the Samurai’s sword. While the cut is bloodless, Smith sells the shock and pain with Wolverine’s expression; his eyes are wide, his jaw dropped and gasping. Later, the Samurai slices into Wolverine’s neck, his adamantium skeleton the only thing keeping his head attached to his body. Wolverine’s furious but pained expression tells the tale, and the pink coloration of the blade’s energy becomes a stand-in for the gush of blood in which a less restrained art team might have gloried.

On page three, Wolverine catches the Samurai’s arm, breaking it at his elbow; the “SNAP!” is the first word we’ve seen for ten panels. As Wolverine prepares to strike the killing blow, his face calm and determined, Mariko stops him in the final panel. 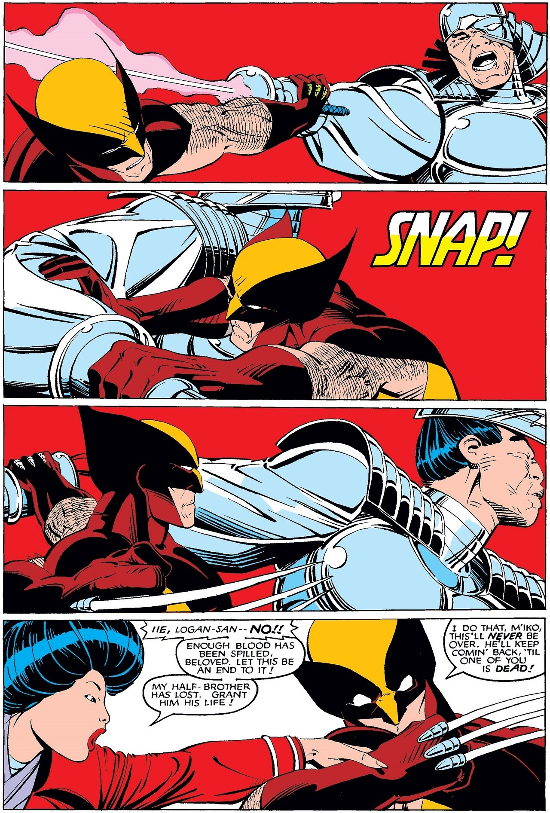 She grabs his arm and shouts, “Hie, Logan-san – NO!!” – something even we hear, after so many panels of silence. Notably, when Mariko catches his attention, the background color switches from red to white: Wolverine is no longer in his focused, violent state. It’s a subtle visual hint at the effect Mariko has on the character and a wonderful punctuation mark on the fight itself.

Smith’s attention to his characters’ expressions and the illusion of their movement on the page combined into a kinetic, vibrant fight sequence that has lived in my memory ever since I read it off the rack in the reprint X-Men Classic #77. It’s a masterclass of comics storytelling that still kicks ass and elicits cheers just shy of thirty years after its initial publication.

Derek Moreland is a writer in Texas, where he lives with a wife, two dogs, three cats, and 2500+ X-Men comics. You can find him on Twitter here, or head to his website at www.derekmoreland.wordpress.com.

3 thoughts on “A Slash of Champions: Derek Moreland on Uncanny X-Men #173”