The Avengers, the Fantastic Four, the Guardians of the Galaxy have all served as Marvel’s primary superhero teams through various points throughout its history. However, these groups are known to combat planetary or galactic threats, facing conquerors, emperors, or mad gods: they rarely delve into more street-level affairs. The Wolfpack however were very different, in that they were a group of seemingly regular teens who dealt with more grounded issues – and in the 1980s that issue was the drug epidemic.

Wolfpack #1: “Crusade” (written by Larry Hama with pencils by Ron Wilson was published in August 1988 with colors and inks by Kyle Baker and Max Scheele) is one of many stories from the era that waded into the then contemporary crack and drug crisis.

The issue opens on a sun drenched South Bronx rooftop where a young man named Sam laments the loss of his master, Mr. Mack. Sam details the long history of the Wolfpack along with brief profiles of its current members – the swift Sharon, the strong Slag, the skilled Raphael, slippery Sam, and the tactical, wheelchair bound Wheels. The scene shifts to a raucous classroom at Harding High School where a student is finishing a dry presentation on the dangers of drugs. The classroom devolves into further chaos once a student named Lupo takes a bathroom break ostensibly to do drugs. Minutes later Lupo is found dead, serving as the latest victim in an ever worsening neighborhood crisis.

That evening, a somber scene is set as the Wolfpack discusses how to handle the crack epidemic, and from there the team tries to investigate the source of the deadly drug. They initially have little success until Wheels gets the name of a dealer named Paco and, after a Batman-eque interrogation scene, the team raids the house of the supplier. Unfortunately, this raid is complicated by the existence of the supplier’s family – and in his desperation, the supplier blows up the building with everyone inside. While the Wolfpack narrowly escape with their lives, they are left lamenting the consequences of their vigilantism. Even the confession of the true culprit behind the overdose deaths fails to lighten this dour mood.

Failure of authority serves as a major theme in this book. The members of the Wolfpack have been repeatedly failed by the parents and authority figures in their lives, and the disappearance of their mentor Mr. Mack leaves the team without much needed guidance, leading them to pursue increasingly risky strategies in an effort to stem the flow of drug related deaths. However, it’s suggested that Mr Mack’s mentoring approach is irresponsible, as he provides impressionable teens with specialized training without thinking of their future. The Harding High teacher is also shown to have little or no control over his classroom, whilst the administration offers little to no support.

Judging from this quick scene, it is easy to surmise that these teens are being underserved by their educational system. The police have little credibility with the students, who exclaim that they have been lied to their entire lives and have been at the receiving end of physical and verbal abuse from these supposed ‘law men’. Why should they believe that the authorities are telling the truth about these drugs when they have broken the community’s trust so many times? 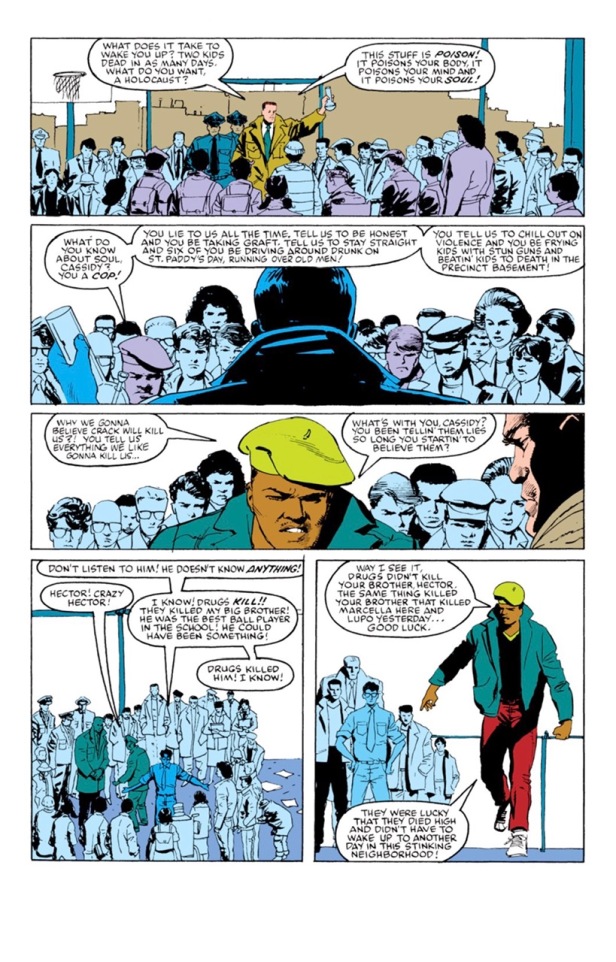 Readers of Wolfpack #1 in 1988 may have resonated with the issue’s theme of the failure of authority to handle a crisis, as it was a visible part of their everyday lives. From their perspective, America was mired in a deepening HIV crisis, a rising tide of urban crime, and a tortuous cocaine epidemic. Governmental responses to these problems were misguided and anemic at best. One such example is the “Just Say No’ anti- drug crusade. For decades, anti-drug messaging has graced the pages of comic books, television shows, and been key pieces of K-12 curriculum. Popular children’s programming of the time also featured anti-drug themes with ‘very special episodes’ becoming rather commonplace.

The use of pop culture characters to serve political or societal ends has a long reach, drawing back to Batman and Robin imploring readers to buy war bonds during the Second World War. Children of the 1980s may recall Cartoon All-Stars to the Rescue, which featured a literal bonanza of animated icons going on a journey to convince a teen from taking his first hit: the amount of IP crossovers could put Super Smash Bros to shame. In that special, the lead character tries pot and underage drinking… and is visited by a series of cartoon characters in a story reminiscent of Charles Dickens’ A Christmas Carol. If kids wouldn’t listen to their parents or teachers, perhaps channeling the moral authority of Papa Smurf would convince them to avoid illegal drugs?

Even real world authority figure President George Bush made an appearance where he and his wife awkwardly told the nation to ‘Just Say No’. But much like the Wolfpack’s perilous raid, the Just Say No campaign went up in a puff of smoke. In that wider context, Wolfpack #1 can be seen through the lens of a gritty anti-drug afterschool special, although at least writer Larry Hama handles this message in a very different manner than others.

The Wolfpack’s fight against illegal drugs is brought to life by Black comic book artist Ron Wilson. Born in New York City in a diverse neighborhood reminiscent of the one seen in the issue, Wilson enjoyed drawing the world around him from a young age. While attending Brooklyn Technical College of Art, his talents caught John Romita’s eye – and eventually led to him drawing a Marvel horror comic, Chamber of Chills. After some time as a cover artist and mainly involved in horror themed work, Wilson finally received his first superhero book when he became the artist for Power Man in 1974. Throughout the 1970s and 1980s, he was the penciller for Marvel Two in One and The Thing: for over a decade, Wilson’s artistic hand brought the adventures of Ben Grimm to life, serving as the defining artist for the character for a generation of comic book readers. Immediately prior to Wolfpack’s debut, Ron penciled a twelve issue run on Masters of the Universe. He didn’t need the Power of Grayskull to craft these worlds, but instead called upon his long hours of training, practice, and perseverance.

Wilson’s faces are simplistic at times, but the sense of motion in even minor actions is remarkable. Wilson’s art is elevated by the efforts of both the inker and colorist, who bring a somber and serious tenor to certain scenes. Jack Kirby and Gene Conlan served as his artistic influences when first breaking into comics, and you can see shades of both of them within his style. In a 2010 interview, Ron reminisced about advice Stan Lee gave him on how to hone his art:

While the Wolfpack eventually caught the culprit behind the latest round of deadly overdoses, their efforts could be seen as treating the symptoms as opposed to fighting the disease. Following an impefect mentor’s approach, the characters embrace improper and inadequate solutions in an attempt to solve complex issues: a concept which is as relevant today as in 1988. Garfield, Alf, and Daffy Duck did not prevent the rise of opioid abuse, underage vaping, or the current fentanyl crisis that would plague the country in the ensuing decades. We can see how hijacking popular children’s characters to embrace a simplistic anti-drug message while ignoring the conditions that lead to teens indulging in illegal drugs in the first place was doomed to failure from the start.

Slippery Sam and the rest of his Wolfpack could never truly end their fight against drugs, and any victory that could be had was pyrrhic. Wolfpack #1 serves as a brief glimpse back at a time where society tried comics as a medium to fight a War on Drugs, and that war was hell.

For more from Matt, you can find his writing over on his website here!

One thought on “1988 in Black Comics History: Wolfpack #1 by Ron Wilson and Kyle Baker”