As it’s set in England, though, and because Allison has such strong instincts as a writer, there are a lot of jokes and references which might fly over the head of the international audience. Here, then, are our annotations to help guide you through life at Sheffield University, provided by our returning Guest Annotator Ned Barnett!

I have RETURNED! My ruse to convince Steve and international readers that I am British has continued!

What ho! It’s the return of Shelley Winters, our guest heroine from the 2017 Christmas Special. Esther’s off to stay with her in London for a job interview.

Susan remains skeptical about Shelley. The dichotomy of a career-woman and lovey-dovey Pollyanna. Also she’s sitting on a cat, which Shelley is allergic to. Pollyanna, by the way, is an American literary character who gets through life by focusing on pragmatism and positivity.

Waitrose is a posh grocery store. Think Whole Foods, minus the being-owned-by-Amazon, and dialed up a notch.

Wowcher is an E-Commerce store, all vouchers and 10% offs and all that sort of a thing – Editor.

Daisy and Susan are off to the spa, which Daisy swears will not involve people touching Susan. While crossing her fingers behind her back. This does not bode well for Susan.

Esther and Shelley are reunited! Shelley is a successful career woman, and her love life continues to suck. I guess her budding romance from the Holiday Special with Colin Firth-alike Cecil hasn’t lasted. Alas.

Shelley’s life and times are the focus of Allison’s series Destroy History. Find out more here!

Esther has the best reason for wanting to work in a bank: not wanting to be poor. And she thinks that working in a big building in London is probably the same thing, regardless of industry.

This page also marks the return of Shelley’s “I am a 20-something woman” Audrey Hepburn poster.

Esther is in for a rude awakening as she heads to the bank for her interview, including passing a man in the middle of a mental breakdown*, and three men on mobiles stepping over a homeless man. Shelley narrates the whole thing in purple prose, while standing in the elevator.

*this is how everyone who works an office job looks at some point.

Esther arrives at the bank for her interview! Her name tag is misspelt. She sees a vision of her future as an Esther-look-a-like in a red suit strides past, talking about the wild party she attended the previous night.

I am actually convinced that this is what banking is like because of the one time that I went to a bar frequented by bankers in London.

I have been to several things like that for my day job: it is exactly what banking is like.

Is Esther bisexual? She doesn’t know how to sit in chairs so I assume she is.

She finishes her interview by asking the nice lady in HR how to get the Interesting Jobs, and the HR Lady divulges the ultimate truth: dumb luck, sharp elbows, or nepotism. Nepotism, naturally, is the biggest one.

Genuinely a smart question to ask at a job interview! If you don’t present any questions when you’re interviewed, the company will think you’re lazy. Ask a sharp question that catches them off guard, and it can really pay off! Er, sometimes, anyway.

Shelley finds Esther giving some money to a homeless man (who was previously getting stepped over by black suited businessmen on page five). She’s taken the day off.

Esther confesses that the bank must have gotten her goth sensibilities confused for a soulless void, and renounces her ties to the night – once she and Shelley go to a Finnish black metal show.

The band: Mätänevä Rautis. Mätänevä is the Finnish word for “rotting” and Rauti appears to be a Finnish surname with my cursory investigations.

I would like a spa day please. Unlike Susan, I will not threaten the massage therapist with “IF YOU TOUCH ME I WILL KILL YOU.”

And now we return to Esther and Shelley, who are off to a death metal show!

The songwriter has clearly compared notes with Susan, as the lyrics translate to “IF YOU TOUCH ME I WILL KILL YOU.”

And Shelley, taste in men impeccable as always*, gets all flirty-eyed over a black metal boy.

Pash off = snogging. Pash comes from the word “passionate”

Shelley’s ended up with a perfect replica of her death metal beau’s make up on her face.

Shelley admits to Esther she hates her job! And that she has crow eye (Britishism for crow’s feet, ie crinkles around the corners of the eyes) and brewer’s droop (ie temporary exhaustion due to drinking too much) because of the stress of work.

Yeah… that’s not quite what brewer’s droop is, tbh.

A quick google of “Apassionata” indicates its either titled after Beethoven’s Piano Sonata 23, or the company that presents traveling horse shows that “…stand[s] for magical encounters between man and horse.” Given how troubling Shelley says it is…I’m inclined to think the book has something to do with A Legend About Catherine the Great and a Horse.

Shelley’s lone copy of Apassionata is kept locked in a box protected by the rune Algiz, an Elder Futhark rune that’s name comes from the proto-Germanic term for Elk. In modern days, it means “protection.” However, it has the rather unfortunate tie to Nazi occultism. The Algiz shape was co-opted by the Nazis to represent “life” and if flipped upside down (the co-opting the Younger Futhark rune Yr or ‘yew’), meaning “death.” This is uh, probably not intentional on Allison and Sarin’s parts, but the ties with Nazi occultism and black metal music do need to be highlighted.

Many thanks to Sierra Barnes for fact-checking this.

Esther and Shelley reveal a dark truth about publishing: only celebrities get to enter it now. Esther has a trick up her sleeve though – the contact information of Ken Lord, the creep.

Shelley’s shirt says “Read the News in the Cormorant (sic)”, which is a reference to the Tacklefield Cormorant, the newspaper Shelley was a reporter for.

Esther texts Lord, with the intention of getting the two of them to one of his legendary parties. Shelley’s uncertain but Esther has the wide-eyed look of a determined Esther.

Also the super cute cat from the holiday special returns with big sad eyes, presumably because Shelley is still allergic. Shelley. Haven’t you heard of antihistamines?

Shelley and Esther are off to Bloomsbury for a soiree. Esther tries to convince Shelley that “twerk” is short for “network.” Esther, I’m sorry, it’s not. Twerking is a dance move.

Bloomsbury is a famous literary neighborhood. The Bloomsbury Group (or Set) was a group of writers, philosophers, artists and intellectuals active in the first half of the 20th century. Their members included: Virginia Woolf, John Maynard Keynes, E. M. Forster and Lytton Strachey.

Ken pours on the “charm” thick, but Esther isn’t having any of it. She says “I’m just a girl who can say no,” referencing Oklahoma!’s “I Cain’t Say No,” sung by Ado Annie. 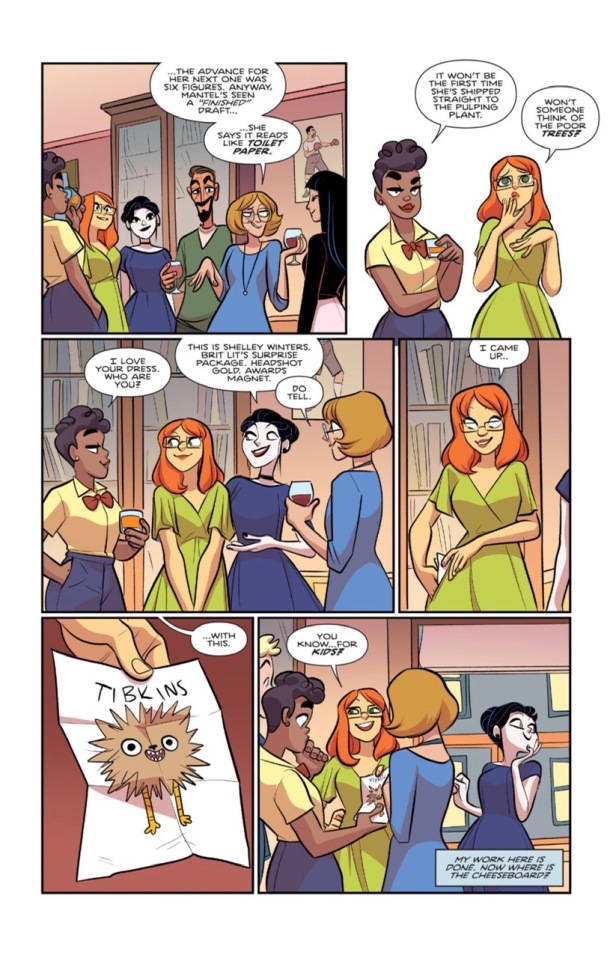 Hilary Mantel receives another mention, critiquing a book that “reads like toilet paper.”

Shelley’s wit ingratiates herself with the literati, and she wows them with a drawing of a weird spiky thing on chicken legs called Tibkins. Esther’s work is done, and she goes off in search of a woman’s one true desire: cheese.

To be honest, cheese is everyone’s one true desire, and if they say otherwise they are either a wise person with lactose intolerance, or lying.

Ken Lord’s party has QUITE the cheese spread. And lots of pictures of Victorian pugilists and awards on the walls. He is a Manly Man Who Gets What He Wants.

Esther sticks to her guns and turns him down.

A very stately woman runs into Esther as she leaves Ken’s study. In the movie version, she’d be played by Emma Thompson. She’s impressed with Esther for saying ‘no’ to Ken, and bringing the very charming Shelley to the party – so much so that she offers her a job.

Shelley charms a literary agent into representing her and her hedgehog with chicken legs. The girls declare a double victory, walking away from Ken’s party with dignity intact, with representation and a job offer. If only the publishing world were this easy! But it highlights the ‘dumb luck, sharp elbows, and nepotism’ from earlier on in the issue. Which is publishing.

Shelley WILL go on to become a successful writer, in future-set stories John Allison had already written by the time this issue had come out. His canon is… dense.

Esther bemoans the difficulties of living on an entry level publishing salary in London, declaring she won’t take the job because she can’t afford it. It’s an interesting job, but interesting jobs, she’s discovered, don’t pay (unless they come with nepotism).

Shelley comes to the rescue – Esther can stay with her until she gets on her feet.

Spa day is a success! Two innocent ne’er-do-wells – Kieran and Mungo – greet Daisy while they are carrying paint and rope. But they’re up to hijinks for leaving Sheffield University dorms. One has what looks like Saga’s Lying Cat on his hoodie, and Coralie has the same picture on her shirt when she lets them into her flat.

When not watching Richard Curtis movies, Ned Barnett makes comics about history! You can find out more about his comics work here, and follow him on Twitter here! You can also support Ned over on Patreon here!

Sierra Barnes is a historian of German history and author of the anti-fascist fairy tale webcomic Hans Vogel is Dead.

4 thoughts on “The Annotated Giant Days #52: Job Hunting in London”