Welcome to the X-Roulette! Shelfdust’s Patreon backers are asked to pick a number at random – and now I’m going to write about whichever corresponding issue of “X-Men/Uncanny X-Men” they chose! This issue was picked by Patreon backer Greg Matiasevich, who chose number 209 for the roulette – so it’s time for the X-Men, the Hellfire Club, and the Morlocks to team up.

It takes two pages for Chris Claremont to set up the entirety of Uncanny X-Men #209, once again showing his ability to make any issue into a jump-on point for new readers. A group of disparate mutants are being faced-down by Nimrod, the mutant-hunting android, and each of them get a panel to explain who they are, what their perspective is, and why they’re in this predicament. It’s sharp, effective writing, supported by John Romita Jr and P. Craig Russell’s ability to set the stakes as high as possible.

The very first page of the issue sees Nimrod floating overhead, looking down on the mutants, who stare up in fear and anger. Colourist Glynis Oliver throws all of the mutants into Nimrod’s literal shadow, coated in the same light blue shade which emphasises how the robot sees all mutants as an equal and indistinguishable enemy who require extermination. Nimrod appears in full colour, again establishing how he is the only thing which matters at this particular moment. The perspective and colouring choices are vital to making the rest of the issue feel taut and exciting, and it’s only after we’ve taken in Nimrod’s terrifying presence that we turn to the narrative boxes for confirmation of the story we’ve already worked out from the artwork.

The second page then turns to show us the horrifying, murderous face of Nimrod, mouth wide open and screaming in a way which displays the wires and microchips which give it life. The mutants are again reduced in Nimrod’s presence, this time with panels inset into the splash of Nimrod’s face, and again they all look upwards at the threat which looks down on them, dwarfing them in its presence. The panels also reinforce the divides between the characters, with each of them getting a panel to themselves, showing that they do not think alike, they do not work together, and they each stand alone even within the team they represent. 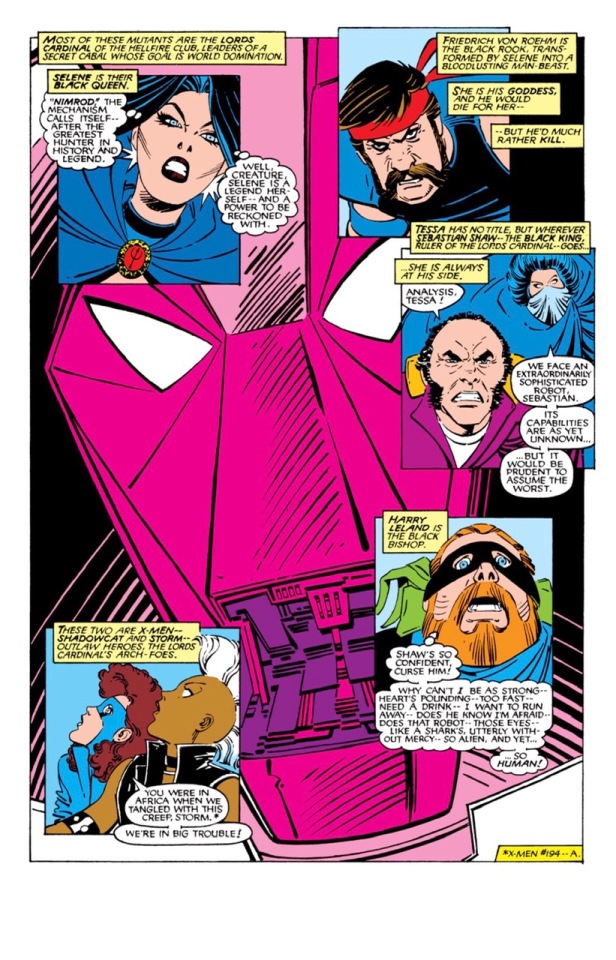 Storm and Kitty prove an exception, showing the vital importance of their bond as friends and teammates. But even within that pairing (as with the pairing of Shaw/Tessa, which is shown similarly) they stand at a distance to the other characters. The point is clear: Nimrod is a force of destruction, and the mutants are at its mercy because they are divided from one another. And what is it that divides them? Class.

Let’s use the British system as our point of reference. By that metric, the Hellfire Club are obviously upper class, having arranged their inheritance, social standing and mutant powers together to set themselves up within the system. They dress richly, blend in amongst the power players of the world, and bicker amongst each other for power. The X-Men are middle-class, having the advantage of their rich benefactor Charles Xavier who has provided them with food, shelter, and family, albeit underneath his banner. And the Morlocks are working-class, a group of survivors who have somehow managed to find each other but have been literally pushed underground by those who wish to persecute them.

Three groups who would only usually see each other in order to start a fight, but this issue in particular forces them to face a common enemy. When you exist as part of a marginalised group, your class system is only going to take you so far: if the privileged decide to wield their power against you, then it doesn’t matter how nice your house is. They’ll come for the rich the same way they’ll come for the poor. These are the political statements of the 1980s comic book industry, and when Claremont arrives at a point, he makes sure to drive it home.

What can we make, then, of the two deaths which occur in this issue, both of which are suffered by the Hellfire Club? Nimrod kills Friedrich Von Roehm directly, whilst he’s about to start a fight with Wolverine. The death acts as a reminder that the disputes between the mutants take a backseat to the clear danger of Nimrod, who has a single goal: their deaths. Von Roehm serves as a uniting event for the rest of the characters, who start to form fragile alliances between one another in the face of this greater threat.

Don’t lose track of the fact, either, that it’s Storm who steps up as leader and organises everyone together, and she’s the one character here who doesn’t have her powers. We all appreciate Storm is an incredibly powerful character, but that power comes from the long-term storytelling the creative team were allowed with her: fighting and defeating Cyclops is one thing, but organising three disparate groups of mutants and uniting them under her leadership? Arguably a much more powerful and inspiring moment for the character. Storm doesn’t have her powers, but organisation and strategy is so much more important when uniting – apply this to your thoughts on unions as you wish. It’s a great moment.

Harry Leland’s final moments provide another defining scene for the creative team. He starts to suffer a heart attack in the midst of battle, but uses his last breath to literally hurl Sebastian Shaw at Nimrod, the force of which shatters the robot into pieces. Von Roehm dies because he can’t separate his hatred for the X-Men from the threat which is directly facing him; by contrast Leland’s death is a more conventional heroic sacrifice. There’s something poetic about it, sure, but it’s also a very simple piece of storytelling: people die sometimes. The fight is a constant strain, and some will fall sooner than others.

But as Nimrod teleports away before a final blow can be dealt to it, we’re left with the only guarantee which the X-Men will always have to face up against: the fight will always continue.