There are so many X-Men out there! You can’t walk round your private island paradise anymore without bumping into twenty mutants. But that raises a question which Shelfdust are going to try and answer! Who is the Best Mutant? We’ll be inviting some of the best writers in comics to argue their case!

Those three words should disqualify Wanda Maximoff, the Scarlet Witch, from any discussion of the best mutant in Marvel’s comics. Using one’s powers in an attempt to eliminate all mutant powers seems like the sort of thing that only the very worst mutant would do. I can see where someone might get that impression; it is nothing if not logical, on surface. It’s reasonable even. It’s also wrong. “No more mutants” was an editorial edict hung on Wanda. One of Joe Quesada’s goals when he became Editor-in-Chief at Marvel was to decrease the number of mutants to make the ‘feared and hated’ element more prevalent again. Wanda was just the sacrificial character who made that happen. It is largely seen as a negative for the character. I think, though, that Wanda uttering the phrase “No more mutants” is precisely why she is the best mutant. Or, half of the reason why.

So, as Wanda was, for all intents and purposes, a mutant at the time of House of M #7’s publication both within continuity and in the real world that we occupy, I am going to proceed with considering her a mutant. Again, wiser minds than mine may disagree and they are welcome to, but, nonetheless, I march on with my folly.

Now that we’ve established that Wanda was a mutant at the time of House of M #7, we may proceed to why that particularly comic book publication has convinced me (so that I may attempt to convince you) that she is the best mutant.

Let’s set aside “No more mutants” for now as that’s the second part of my argument and, admittedly, the weaker part. The first (and stronger) part is the bulk of House of M #7 and, in fact, of the House of M story in general. For those unaware, House of M is the first ‘modern’ Marvel event comic, written by Brian Michael Bendis, drawn by Olivier Coipel, tim Townsend, Rick Magyar, Scott Hanna, and John Dell, coloured by Frank D’Armata, lettered by Chris Eliopoulos, wrapped in covers by Esad Ribic, and edited by Tom Brevoort.

It began as a possible crossover between New Avengers and Astonishing X-Men, but, when Joss Whedon’s schedule wouldn’t allow it, it became a standalone mini-series written by Bendis alone. It was actually a sequel to the “Avengers Disassembled” that began his extensive run on the Avengers book, dealing with the fallout of Wanda’s mental break, and what to do with an incredibly powerful (note: female) mutant who can alter reality but is no longer in control of themselves.

When the Avengers and X-Men go to the ruins of Genosha where Magneto, Professor X, and Pietro have been taking care of Wanda, things go sideways and, suddenly, it’s a whole new world. Literally. From the second issue through the seventh, House of M takes place in an alternate reality where mutants are not only accepted and seen as equals of the rest of humanity, they’re held in higher esteem. It is not a perfect world by any means, but it resembles the ‘real’ world to a large degree with a shift in the overarching power structure. Humanity is viewed as a species with the clock running out, while mutants are the future of the planet (a fact that’s always been a given in the comics). In many ways, this is the world that Xavier and the X-Men have been working for through their entire existence.

Naturally, they and the Avengers decide to end it.

I have read House of M many times and I still don’t completely grasp the ‘why’ of their decision to restore the ‘real’ world. The answer seems to be ‘because.’ Because it’s not ‘real.’ Because it’s different. Because it’s changed. Because, when you realise the world around you isn’t the ‘real’ one, you put everything back no matter if it’s better or worse? I don’t know. The question is raised, briefly, in the sixth issue only to be brushed off as too embarrassing to actually discuss and that’s how the entire exercise is painted in the negative, by just assuming it’s a negative by default. It’s a cop-out by Bendis, and one that commonly arises in his work. Whatever plan of action is decided upon by the heroes (or villains, even), there are always counterarguments raised, sometimes ones like this that are ones that undercut the entire story being told, and they’re hand-waved away.

Or, to put it another way, all of the heroes here are willing to kill Wanda for giving them a better world and, a couple of years later, many of them will argue vehemently against Hawkeye killing Norman Osborn after he takes over SHIELD in the wake of Secret Invasion because the point of that story is heroes don’t kill with all counterarguments brushed aside with as much subtlety and careful consideration as Wolverine’s dismissals in House of M. 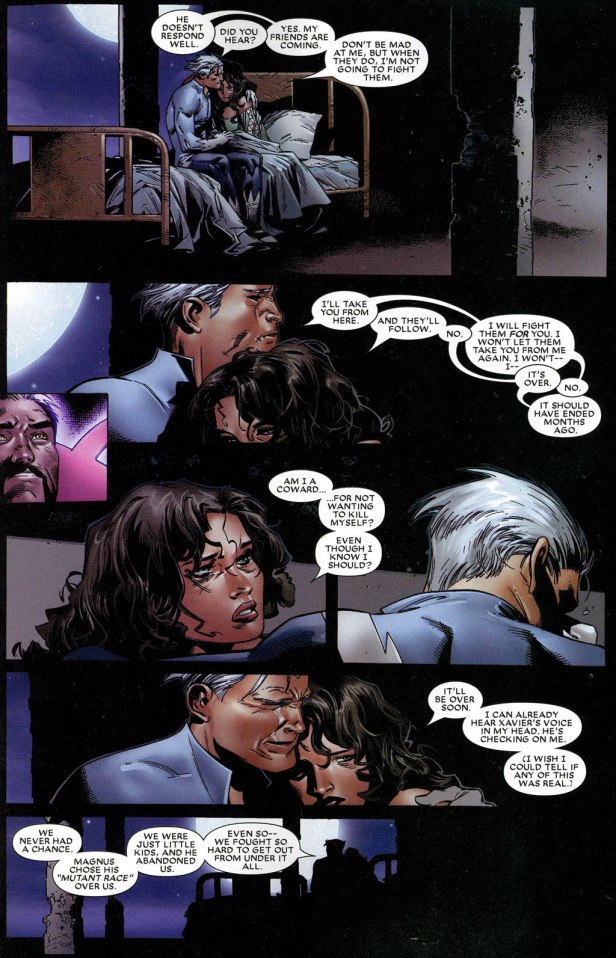 Issue #7 of House of M explains how it was Pietro who convinced Wanda to use her powers to reshape reality, to protect her as the Avengers and X-Men arrived on Genosha to… do… something to her (it was never settled what exactly they would do with Wanda, though killing her was under serious discussion). Pietro’s argument was that, if she used her powers in conjunction with Xavier’s telepathy, she could remake the world into a better one where all of the heroes would get everything they wanted and they would leave their family alone. It’s an act that stems from a selfish place, but is accomplished in a benevolent manner that benefits pretty much everyone.

Wanda and Pietro make Xavier’s dream come true just so they can live in peace. They make the world not only safe for mutants, but a world where mutants thrive. A world where human parents hope that their child is a mutant rather than dread it. And, yes, humanity suffers a downgrade of sorts, but not the sort where being a human is enough to have a giant robot disintegrate you; more the sort where you lose out on the odd table at a restaurant because a famous mutant gets it. Tragic.

And it’s not just the overall status quo of mutants that gets upgraded. Peter Parker gets to live his dream with Uncle Ben and Gwen Stacy still alive, Spider-Man as a celebrity, and, generally, a tragedy-free life compared to what he lived through in the ‘real’ world. Carol Danvers is the superhero in the House of M world and that role is the first big step into her version of Captain Marvel being one of the most prominent heroes in the ‘real’ world. Steve Rogers never gets frozen and gets to live his actual life post-World War 2. Wanda even undoes the death of Hawkeye that she was responsible for during “Avengers Disassembled.”

Luke Cage runs the sapien resistance against mutant rule, getting to be even more a ‘hero of the people’ than he usually is. Polaris is even included as part of the House of Magnus, welcomed by Wanda as a sister, giving both of them the family they’ve always wanted. Run down the list of characters in House of M and every single one of their lives are better in some way, because this world was designed to be better.

Except for Gambit, sucks for him I guess.

At this point, Wanda has given mutants (and  everything that they could have wanted and they respond with violent rejection. Plan A doesn’t work to help solve the ‘mutant problem,’ so she moves on to Plan B:

Take away the cause of the problem and there is no problem. No more fighting between humans and mutants, or mutants and mutants. No more fear, no more hatred. No more kids hitting puberty and waking up to find their skin falling off or blowing up their classroom or killing the first boy they kiss with that very kiss. No more possibilities of camps or mass extinctions. No more Sentinels. 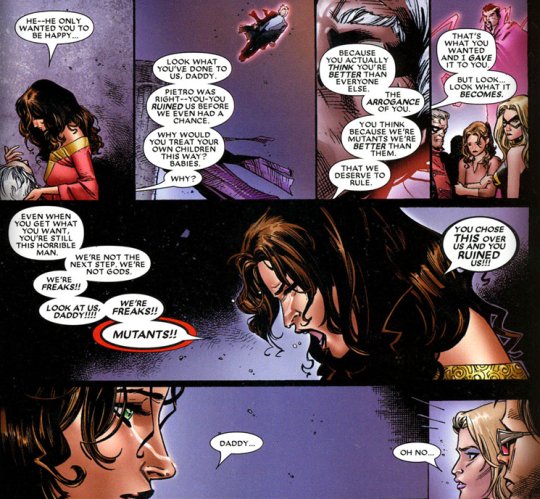 But, mostly, for Wanda, no more fighting. It’s a naive point of view and one that’s coloured a little too much by her anger and frustration at the rejection of the world she gave everyone. While there is some valid logic in her idea that, if she takes away mutants, then that will solve the ‘mutant problem,’ it is short-sighted in not considering the various problems raised by this choice. Her impulsive decision to eliminate mutants doesn’t take into account those that don’t want to give up their powers, those that identify strongly as mutants and would never choose to be anything else, or the fact that editorial would dictate that the number of mutants be cut down dramatically, but not eliminated altogether. While the phrase “No more mutants” was ill-considered by Wanda, it was also undercut by the fact that the result was really “A lot less mutants… for a while.”

Xavier and Magneto both spent years fighting for a world where mutants were accepted, in their own way. When they got it, they and their followers all rejected it in favour of more fighting. Who could blame Wanda for looking at this mess and thinking the problem was that mutants just want to fight to fight? Evolution is a violent and bloody mess often and she didn’t have the stomach for it, particularly in light of just having a world that solved this very problem thrown back in her face.

So, yeah, Wanda Maximoff is the best mutant, because she’s the one that tried not once, but twice, to solve things and did a better job, both times, than Xavier, Magneto, the X-Men, the Brotherhood, and the Avengers all put together.

Chad Nevett is a writer and critic who once wrote a book about Avengers Vs X-Men. When not pitting Marvel’s top characters into battle, you can find Chad on Twitter here!