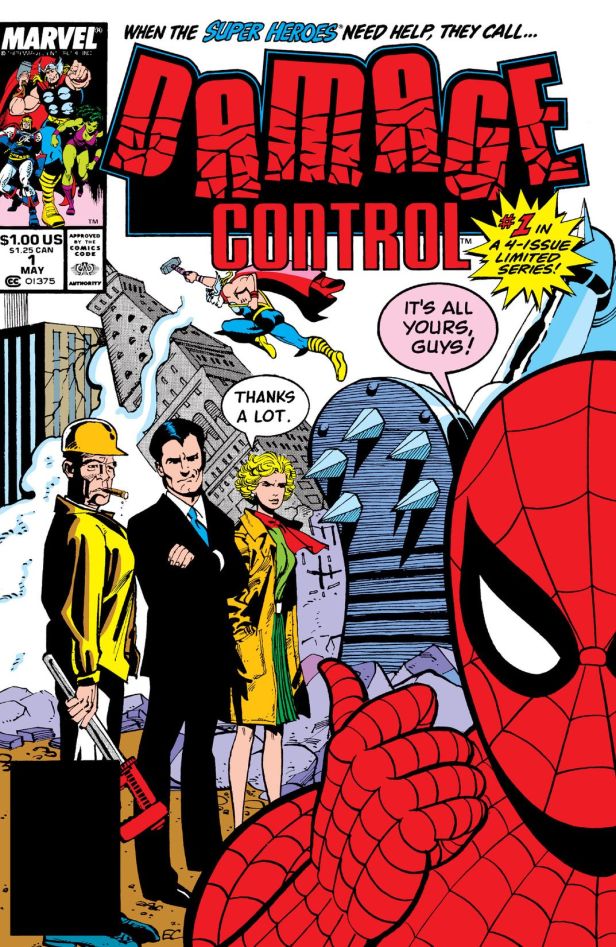 Editor’s note: please scroll down after this piece to read a comment from Gregory Wright, who worked at Marvel at the same time as Dwayne McDuffie.

Before Dwayne McDuffie came up with the concept for Damage Control, he’d worked as an assistant editor at Marvel for two years and had yet to write a comic book issue or an entire series himself. The reason for this most likely had to do with how rare Black creatives were at Marvel – however, he did have chops in visual storytelling and script-writing, honed prior at Tisch School of The Arts at New York University in the early 80’s. McDuffie found that these skills would translate easily, eventually, to comic book writing… and ultimately combined them with a newfound fascination for superheroes to make Damage Control.

Originally pitched by McDuffie as a sitcom set in the Marvel Universe, Damage Control would revolve around a Manhattan-based group of individuals who were in charge of cleaning up, replacing, and repairing the property damage caused by superheroes during their routine fights with supervillains. The first issue of the miniseries was published in 1989, with McDuffie joined by Ernie Colon, Bob Wiacek, John Wellington and Ed King. And one thing was immediately noticeable: it’s sense of humour, something rarely seen in Marvel Comics today.

In fact, Damage Control #1 feels very much like the original self-referential joke comic McDuffie wanted to write when he coyly sent a memo to Marvel about an idea called “Teenaged Mutant Ninja Thrashers”.  A play on the Teenaged Mutant Ninja Turtles, the Ninja Thrashers memo was meant to make a point about the lack of diversity in comic books at that time, especially how Black characters were often reduced to harmful stereotypes and sidekicks to white characters. 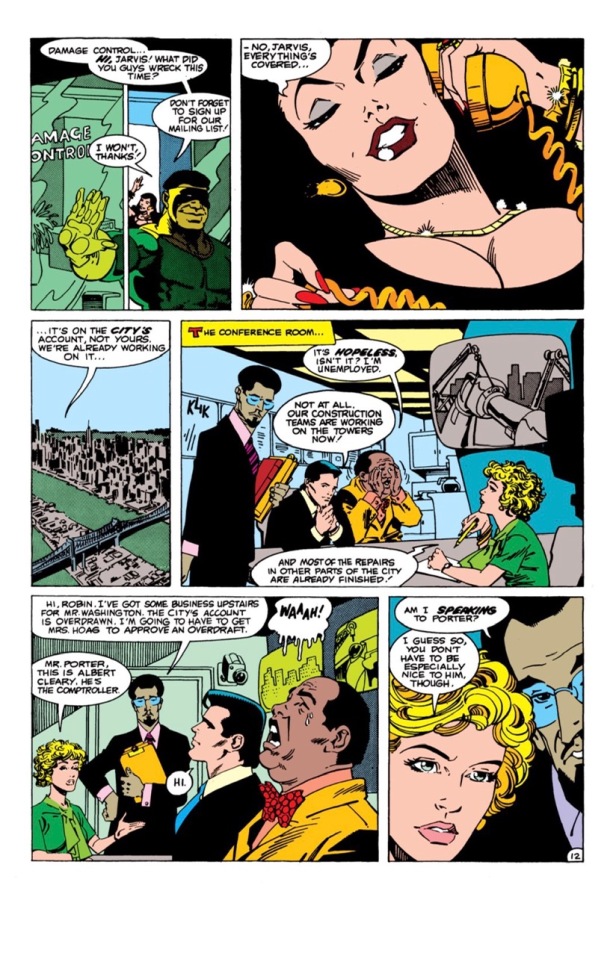 Pointedly, not only does Damage Control #1 put Black characters in key and supporting roles, but it also gave them a variety of skin tones that had yet to be seen in comic books. An intentional move, McDuffie later stated:

“You had the stupid angry brute and the he’s-smart-but-he’s-black characters. And they were all colored either this Hershey-bar shade of brown, a sickly looking gray or purple. I’ve never seen anyone that’s gray or purple before in my life. There was no diversity and almost no accuracy among the characters of color at all.”

Without reading the comic, one might have assumed that the Black characters – who notably don’t appear on the cover, whilst the white characters do – were only there for comedic relief. In the hands of McDuffie, however, almost everyone gets to have a sense of humor while trying to do their jobs – even the superheroes and villains. Obviously, being a superhero or a villain is stressful with all the battles and evil plotting going on. For a clean up crew like Damage Control, humor is especially important to get them through the hectic day of dealing with the aftermath of superhero battles. Through quips and puns, Damage Control and the superheroes they interact with become relatable to everyday people who work stressful jobs.

That humour shows up right from the start: the issue begins with The Avengers managing to defeat a giant robot after great effort. But in all the kerfuffle, Spider-Man goes inside the robot to shut it down – and gets stuck! Meanwhile, the series’ lead character John Porter heads to his first day at Damage Control to start work as their new account executive. John sees a Black super-villain named Thunderball come to collect his wrecking ball from lost and found; introduces himself to some of his new co-workers; and meets his first client Robert Washington – a Black man distraught over the fact that the giant robot from earlier has crashed into his place of work: The World Trade Center.

Thunderball is especially notable because he is humanized when he could’ve been a stereotypical “angry Black man”. Porter asks if he is there to rob the place and Thunderball coyly replies he already tried picking up “extra spending money” elsewhere when he “lost” his wrecking ball- by trying to throw it at the cops but smashing a building in the process. Thunderball would receive further characterization when he made an appearance in Ta-Nehishi Coates’ comics. 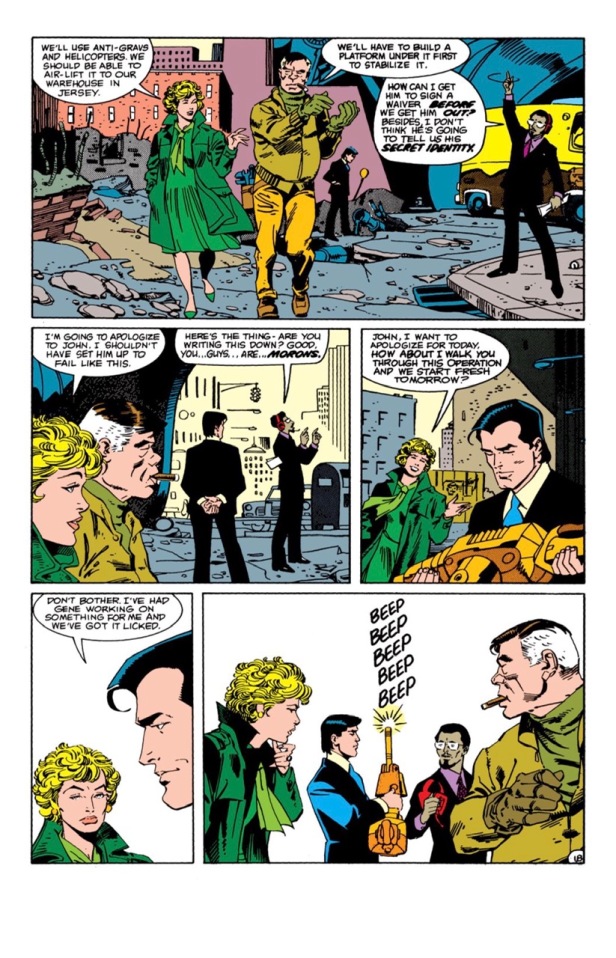 Another well-written Black character in Damage Control was comptroller Albert Clearly. Not only does he makes funny quips about his co-workers’ incompetence and his desire to meet Spider-Man, but he also gets to be the level-headed person in control of the situation until Porter gets his bearings. McDuffie’s skillful writing and characterization of both Black and white characters demonstrated how it is eminently possible for a Black comic book writer to write stories that aren’t solely about Black characters.

Before McDuffie was hired at Marvel, mostly white writers created and wrote Black characters: Stan Lee and Jack Kirby did it for Black Panther; and John Romita Sr. and George Tuska for Luke Cage. The only exception prior to McDuffie was Christopher Priest, who became Marvel’s first Black full-time writer (and later editor) in 1983 and worked under the pen name Jim Owlsey whilst writing for The Falcon as well as Power Man and Iron Fist.

Priest has stated in interviews that he was often pigeonholed as “the Black writer” at both Marvel and DC Comics, a factor that would result in him leaving the comic book industry for years. McDuffie would later remark on camera about his own experience being pigeonholed, stating that he couldn’t add more than one or two Black characters in a superhero roster without white readers labeling it a “Black comic”.

Eventually, John uses a device made by his team to transform the robot into a car… while Spider-Man is still inside it. At this point, Robin yells, “Oh no, you’ve killed Spider-Man!” John, without missing a beat, calmly replies, “No I didn’t. He’s in the trunk.” All’s well that ends well and John Porter gains the newfound respect of his co-workers, especially the skeptical Robin.

All in all, McDuffie would write three Damage Control mini series that were published between 1989-1991, and a fourth in 2008, showing that there was a strong fanbase for the stories. Eventually, McDuffie would eventually leave Marvel in 1990 and go on to co-found Milestone Media in 1993, which featured a slew of which featured a slew of original superhero characters of color and LGBTQ characters such as Static, Xombi, and Deathwish – so expect to hear a lot more about Milestone in future months. McDuffie would also write and produce for numerous superhero television shows such as Static Shock, Justice League Unlimited, and All Star-Superman.

Dwayne McDuffie’s influence has been felt across comic books, movies and television. His iconic Milestone Comics characters have made appearances in the television series Young Justice, while Black comic book writers such as Kwanza Osajyefo cite him as a major influence. There is also an annual comic book award that bears his name: the Dwayne McDuffie Award for Diversity In Comics. Even Damage Control has appeared in some of Marvel’s shows, video games, and movies – most recently in the Marvel Cinematic Universe film Spider-Man: Homecoming. No matter where you look, McDuffie’s legacy shines brightly.

Latonya Pennington is a poet and prolific critical writer whose work has been featured on sites including WomenWriteAboutComics and The MNT, amongst several others. You can follow them on Twitter right here, and their website is here!