Black Panther is always both a hero and a king, something which is forefront in 1988’s Black Panther: Hero No More #1. Released in July 1988, the story ‘”Cry, Thy Accursed Country” by Peter Gillis and Denys Cowan was the debut issue of a four-part miniseries.

Today, Black Panther (as portrayed by the late Chadwick Boseman) is a premier character of the Marvel Cinematic Universe, starring in one of the top grossing films of all time. However, this was not always the case. Following his 1960s debut in Fantastic Four, the King of Wakanda was subsequently limited to team books, guest appearances, and two short solo runs. At the time of A Hero No More’s publication, the character had gone nearly a decade without a solo run: a far cry from the critically acclaimed, thought provoking series Black Panther is now.

Today the African nations that inspired T’Challa’s fictional homeland are vibrant, industrious places. Their societal and technological evolution defies expectations and age old stereotypes. However in 1988, the African continent was a much different place in the eyes of the world. Most nations were barely a generation removed from colonization and the nation of South Africa was still under the rule of Apartheid. Apartheid, geopolitical strife, and the clash between traditional values and western ‘Modernity’ are just a few of the struggles that T’Challa faces in this issue, while handling the crisis in nearby Azania – a fictional country which is a composite of the then contemporary South Africa & Zimbabwe.

The comic opens with Black Panther’s takedown of a black rhino with accompanying narration highlighting his quickness & strength. Subsequently, he is attacked by two panthers and bests them with similar grace. However, T’challa is shaken by this encounter because as the Black Panther, he should have dominion over them and never been even touched. He harbors thoughts that the Black Panther spirit is leaving him and quickly these private concerns become public conversations among the citizens of Wakanda.

Meanwhile, the Black majority of neighboring Azania is revolting against the oppressive rule of the White minority and T’Challa is torn between his morals and geopolitical consequences for intervention as a head of state. A panther spirit has been killing members of Azania’s oppressive regime after an old Black Azanian undergoes a transformation while being brutalized by Azanian authorities. These panther attacks fuel the black majority’s revolt but also spark an authoritative response by the white minority government.

In a speech, T’Challa denounces the violence and actions on both sides and is immediately accused of taking the side of the Azanian government. Shaken by this recent loss of confidence, the king undertakes the Challenge of the White Ape to prove he is worthy of the panther spirit. In this ordeal, the king must retrieve a leaf from a mountaintop and escape a jungle infested by deadly white apes. He overcomes the challenge by evading the apes, however it is revealed that one of his advisors used a device to sap the white apes’ strength. Consequently, T’Challa is asked to step down from the throne. The story concludes with the Azanian government plotting with a shadowy group to kill Black Panther whom they blame for the recent panther attacks.

You can see how Azania, in this story, serves as a proxy for Apartheid era South Africa. Apartheid was a government backed system that mandated legal segregation between the Black majority and the white minority and promoted systemic discrimination against Black South Africans. The Black underclass was forcibly removed from their land and shoved into squalid urban ghettos, possessed no freedom of movement within the country, no right to vote, and suffered no lack of daily indignities and humiliations. Interracial marriage was banned and most facets of life such as employment, recreation, healthcare, & education were segregated. Wealth was overwhelmingly concentrated in the hands of white elites, while Black South Africans remained mired in poverty and despair.

Life for the average Black South African resembled the Jim Crow South where ‘separate but equal’ ruled into the 1990s. Protests and uprising between the black majority and the government were violent suppressed. The panther spirit that attacks white Azanian officials and citizens represents the violence between Black and white South Africans during these turbulent years. By the 1980s, South Africa had found itself an international pariah for its harsh policies, with its economy crushed under sanctions. Due to these pressures – and fear of a Black revolt – apartheid policies were rolled back by President deClerk. Negotiations between Black and white leaders continued amidst escalating violence. Freedom fighter Nelson Mandela was finally released from his long imprisonment and in 1994 became the first Black president of a post-Apartheid South Africa, following the first free election in the nation’s history. 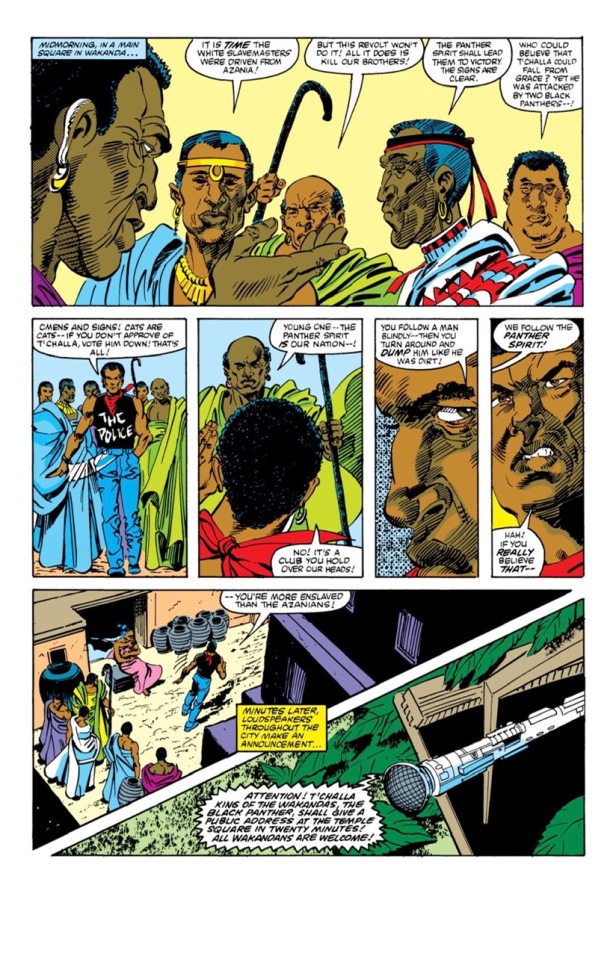 Black Panther’s role as a head of state as well as a superhero ensures that geopolitical issues never remain too far from his mind. The geopolitics of this miniseries alludes to then-contemporary South African apartheid and asks a few key questions. Wakanda is the most technologically advanced nation not only on Earth but how should this power be used? What role should the most powerful nation in the world have with its nearest neighbors? What actions should a stronger nation especially if these neighboring states abuse their own citizens? In our world, no liberating army freed South Africa from its plight. As T’Challa struggles with the mantle of Black Panther in a changing world so does Wakanda in its role as a leader among nations. Who is T’Challa to his native Wakandas and what responsibility does he hold toward non-Wakandan Africans? Any action that the king takes regarding Azania holds life or death consequences and there are no clear cut answers. A rebellion would cost lives and if Wakanda actively supports the uprising, Wakandan troops would most certainly have to get involved. Would these troops be seen as liberators or occupiers? The crown of royalty is heavy indeed.

Beyond geopolitics, this issue shows the struggles of tradition in a modernizing world. As a monarchy, Wakanda prides itself on its long line of historic continuity and tradition. The panther spirit and the right to rule are sacred. T’Challa’s advisor Moise Bomvana views Wakandan affairs from a less traditional and more Western perspective. He implores his king to forgo the challenge of the White Ape. T’Challa states Bomvana knows Western ways but does not know Wakanda’s. This lack of confidence in traditional ways ultimately costs the king his crown. From an outsider’s perspective, certain cultural practices that can be seen as backwards or barbaric, hold deep significance as rites of passage or ways to pass down culture. Local traditions can be erased by globalization. How much can a society change and adapt while still retain the characteristics that keep its culture vibrant and true?

Having Black Panther deal with a political issue like Apartheid was essential for artist Denys Cowan. In an interview with Alex Dueben of The Comics Journal, Cowan stated: “If we’re going to do a story about a Black African king, we need to deal with what’s going on in Africa – like Apartheid”. This artistic choice would prove problematic to some.

The first three issues of the Black Panther: Hero No More! miniseries were finished in 1984 – however Cowan says that due to editor Jim Shooter’s interference, issue four wasn’t completed and the series’ publication was delayed until 1988. Editorial was concerned with whether American readers would be interested in a story that was intrinsically tied to then-contemporary African politics. Given America’s current disinterest in African internal geopolitical issues (let alone in 1984) this is an unsurprising view.  It is plausible that the story’s subject matter – Black and White relations – was deemed a bit too controversial for 1984’s Marvel Comics. Cowan muses that his rising stardom from his artistic work on Batman and The Question contributed to the story’s eventual completion and publication.

Overall, Black Panther Hero No More! #1 provides an intriguing look at the concept of what if Wakanda and Apartheid era South Africa were neighbors while debating the ethics of foreign interventions and the impact of globalization. T’Challa’s self-doubt and frustration with both his superhero mantle and royal duties when framed as a man in an impossible situation has universal appeal. This issue doesn’t cover when or if the King reclaims his throne or whether the Black Azanians gain their freedom. If our history is a guide, they will, but struggles remain. Black Panther Hero No More! #1 showcases the tale of a conflicted but righteous man pondering his role and how to confront evil in a time not so long ago.

For more from Matt, you can find his writing over on his website here!

One thought on “1988 in Black Comics History: Black Panther: Hero No More #1 by Denys Cowan”