Embrace change! Shelfdust has been invaded! For the next eight weeks, we’re looking back at Marvel’s 2008 event storyline “Secret Invasion” and how the eight-part storyline changed Marvel. It’s a “SeCritic Invasion!” taking over comics criticism this Summer! But… are we working alone? Is Shelfdust the only place the Skrulls have taken over? Who do you trust…? 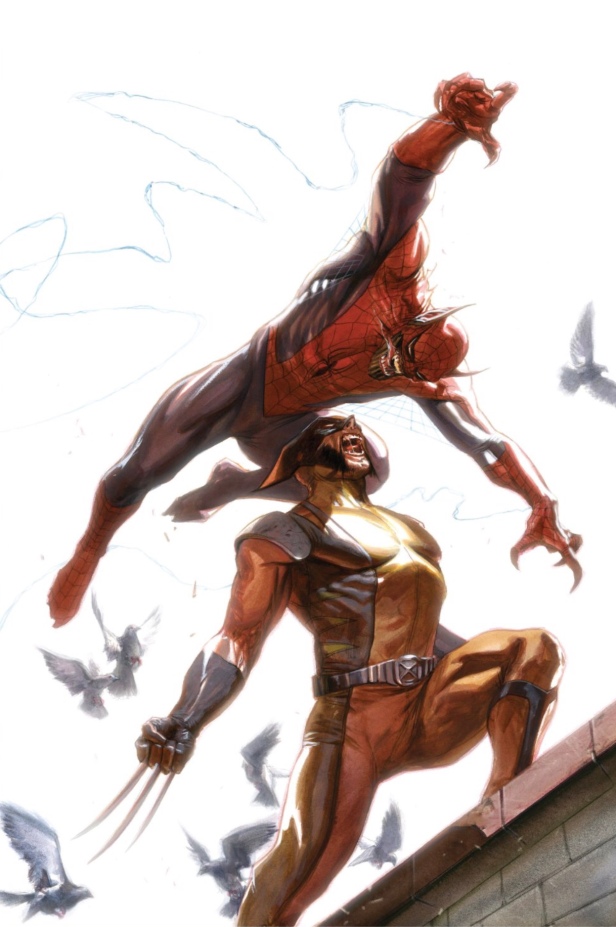 “Quantity has a quality all its own”

Issue #7 of Secret Invasion is the big fight issue. After six issues’ worth of build-up all the super heroes (and some villains) join forces to take on the invading Skrull forces. This is what American scholars such as Northrop Frye would refer to as ‘climax’ and French scholars would call ‘denouement’ (with a silent ‘T’ – because the French are monsters). Like when Hamlet fights Laertes and all the hidden truths come to light as the protagonists die to bump-up the sales. Some of you might argue that issue #8, the actual final issue, would be the denouement; but classic scholars of dramatic structure never gave much thought to the need for a sixth act to set readers up for the next play (plus some spin-offs). Shakespeare sadly never got to reveal a post-credits act of Hamlet in which we learn King Lear is invading and also Julius Caesar has been resurrected.

So this is the big action set piece… except every issue so far has been a big action set piece, because the characters have been punching their way through this ‘secret’ invasion since issue #1, like the worst play-through of a stealth game. Thus, this issue has no choice but to up the stakes even farther – with hundreds of participants and many different factions (The Avengers, The Thunderbolts, The Hood’s Gang, Nick Fury’s Secret Warriors) fighting not only against each other, but also for control of the page. The result is pure chaos. There’s stuff constantly happening on the page as characters pop-up only to be shot down, but none of it actually makes any sense.

The narrative obviously recognizes that it’s hard to follow, because it keeps introducing characters with on-page captions so (new?) readers can keep up. Except, there are so many characters that often it doesn’t bother – for example, the story doesn’t even tell us poor Wonder Man’s name. He’s just floating there. You could say that he’s not that important to the story (fair enough) but if that’s the case then why is he actually there?  If he doesn’t fulfill any purpose maybe, just maybe, he shouldn’t be in the story? Secret War, the ur-Marvel crossover, had a lot of problems; but at least it understood that every character should have something to do.

Issue #7 of  Secret Invasion, on the other hand, has so many characters that they all end up with nothing to do. Even the big names (Spider-Man, Wolverine), or the characters that have been the centre of the plot so far (Iron Man, Mister Fantastic) end up sidelined. Iron Man says his armor is falling apart and he tries to leave (twice); Noh-Varr shows up to join the Earth heroes; Skrull Hank Pym grows big (everyone is shocked by this for some reason). There’s no plot, no continuity, it’s all just a series of incidents. You could remove each of those from the issue, or shuffle them around randomly.

Even in his grandest experiments with cut-up technique William S. Burroughs would have hard time reaching these heights of pandemonium.

But even if it’s dumb… at least the action is good, right? That’s what we’re here for – to see stuff blow up good! Alas, stuff does blow up, but it blows up quite badly, and a lot of that is certainly down to the scripting side, with Bendis constantly asking Yu to bring in more and more figures onto already crowded pages.

A good fight scene, especially in comics, has a rhythm to it – we need to understand the flow of events, the choices each character makes and their consequences. And in that respect superhero comics actually make it quite easy for their creators. Compared to stuff like military fiction, each character is easily identifiable thanks to a unique costume, and they tend to have simply understood powers that are visually clear – this one flies, this one shoots lightning, this one is very strong etc.

Yet the fight scenes in this issue are extremely muddled. Over and over again the action is presented as a series of single and double-page spreads which position characters against one another in rather basic fashion. There is no follow-through and no clear strategy for either side other than ‘pose dramatically’. For example, one page focuses on Spider-Man and Iron Fist together: they are in a pretty tight close-up so we have no idea who they are fighting with, the threat is unclear and their strategy is unclear. To add insult to injury, once that page is over the characters simply vanish from the narrative.

Another page ends on a cliffhanger: Bullseye, now working with the Thunderbolts (supposedly with the heroes) is taking aim with his rifle, looking at Spider-Man through a sniper scope. His identifying captions even say “Bullseye. Thunderbolt. Assassin.” Highlighting the sense of danger in an already paranoid premise – even on his own side Spider-Man isn’t safe. Bullseye takes the shot, the reader turns the page… and we see a horizontal panel featuring several characters in middle of another scuffle.

It’s likely we are meant to understand Bullseye shot at the Skrull Yellowjacket, who shouts in pain and falls down. However, other characters in the same panel are also in a position that might hint at being hit! After all, Bullseye shot three times while Yellowjacket only seems hit once (and any reader who knows Bullseye is sure to point he wouldn’t miss such a big target). Finally, the sound effect of the previous panel, “blam blam blam” seemed to imply bullets – but Yellowjacket is hit with a massive explosion, like a rocket. What should be a simple exercise in set-up (lining up the shot) and release (the shots hits an antagonist) becomes a confused mess that forces the reader to backtrack through the page to understand what’s going on.

Compare this to Avengers #276, another penultimate issue (of the “Avengers Under Siege” storyline). That issue is also mostly combat-driven, but the creators make every scene count into a coherent whole while explaining to readers why the characters do what they do – for example, Black Knight knows he can’t beat Mister Hyde, so he keeps the fight in the dark to avoid being hit by his stronger opponent. Later, more Avengers join him in order to keep Hyde distracted until the much stronger Thor can arrive and finish him off.

Leinil Francis Yu was never my favorite artist, but I could’ve sworn he’d done better jobs in the past.  Many of the panels are tight shots that keep just one or two characters in focus, leaving everything around them as a blurry suggestion. The intended effect might have been to allow us to focus on different areas within the big battle, but the end result is that each scene appears detached from the whole: our protagonists are punching or shooting at the air, the threat is utterly opaque.

A big action issue probably should be dumb – it should connect to the reptile brain, the primal part in all of us that loves to see thing smash together. What it shouldn’t be is boring. And for all the smash-your-action-figures energy it brings to bear, Secret Invasion #7 is boring. It’s dull. It’s lifeless. All these big-name characters are simply lost in the chaos of the plot and art. It’s sound and fury, signifying nothing.

Tom Shapira’s writing has been featured on many different websites, ranging from PanelXPanel and The MNT right through to The Comics Journal. The best place to find him online is on Twitter, right here!