As it’s set in England, though, and because Allison has such strong instincts as a writer, there are a lot of jokes and references which might fly over the head of the international audience. Here, then, are our annotations to help guide you through life at Sheffield University, provided by our Head Annotator Kelly Richards! 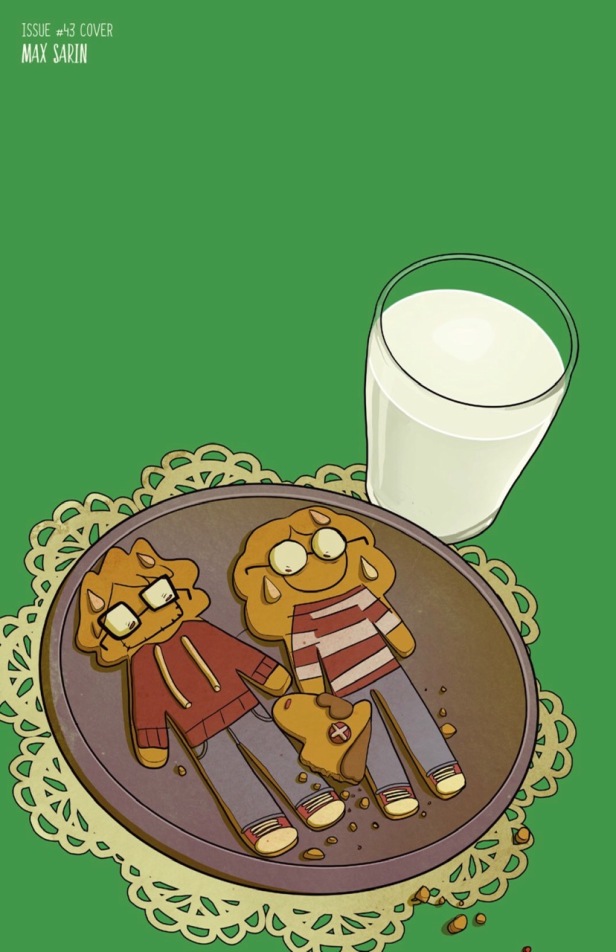 Puzzled! At the Christmas Market.

“Gaffer” is a slang way of saying “manager”. In America “gaffer” means electrician I think, and in the UK dads use it to mean “sellotape”. What a strange word, to be honest – Editor.

Wouldn’t be a Portakabin without a sexy calendar. Wouldn’t be Christmas if that calendar didn’t feature a sexy elf.

Ed should request that the charge is itemised, and then he needs to query each item. It probably won’t solve anything but sometimes the best you can do in these kinds of situations is cause problems on purpose.

I’m not really sure what a subreddit is, I’m not that kind of Online, but I am in favour of stowing away.

Condemned is an awfully strong word to describe meat… and what is non-food wine?

The Holidays are Coming is the jingle that accompanies the Christmas Coca Cola advert with the big lorry. It’s only run since 1995, but it feels like forever.

Except for the shirt. And the cigar. And the sneer. And I would assume, the smell.

You are absolutely responsible for any package you sign for even if you have a very clear policy stating otherwise. If in doubt give a fake name… because that club will try and make you buy them new weight plates when they go walkabout. This feels like a very specific example Kelly.

That is a very friendly teapot.

Mike Pence was the 48th vice president of the USA and quite the villain. I don’t know where one would acquire a Mike Pence stress ball but he does have the sort of head you want to squeeze. 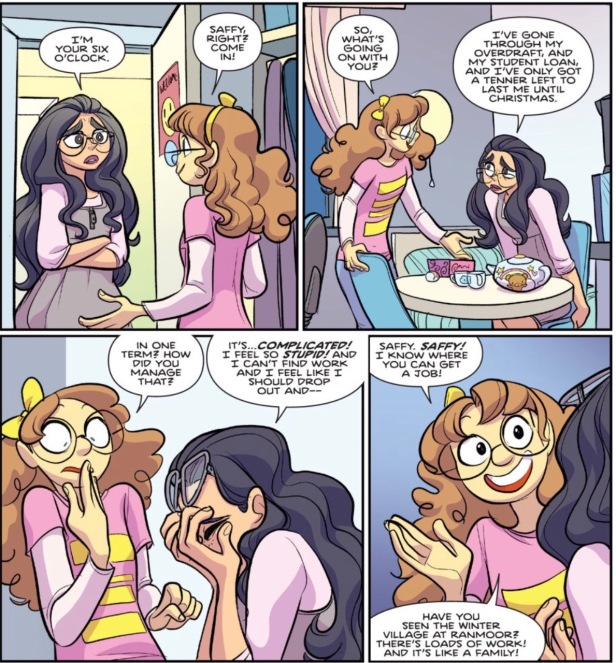 It’s actually extremely easy to burn through your entire loan and overdraft before the end of your first term. Student loans don’t even cover the cost of accommodation so most students are starting university already waist deep in their overdrafts. Everything else stacks up fast, so if you can’t find or don’t have time for a part time job you are pretty much boned.

Stop trafficking people to Cliff, Daisy! It’s not at all like a family.

I assume that banger is some kind of slang for moustache but I have never heard it and google is giving me nothing.

Susan is correct, this is exactly how the godforsaken economy works and I have the [redacted] to prove it.

It’s nice to think that social media could have made at least one human rational, even if they are fictional.

A slack jaw indicates stupidity. “Doubting Thomas” refers to the Apostle Thomas who doubted that Jesus had returned until he could see (and feel) him for himself. All in all, “slack jawed doubting Thomases” is a pretty good insult.

The only Peters & Lee I know are the moderately successful British folk duo from the 70s. I’m not sure why they would run an essay-writing competition but Dianne Lee was from Sheffield so maybe it is them.

Esther writes essays the same way as I do, so I can only offer support in this endeavour.

Are you annotating Giant Days on your phone??

Have you ever seen such a miserable little elf?

Lance could’ve been McGraw but he was playing.

Not again implies that this is not the first time Ed has been involved in a slapstick ladder incident. It’s hard to look convincingly angry when you’re wearing an elf costume.

I’m not sure if Cliff is very good or if Ed is very weak but I have my suspicions.

Joseph is a good role though, better than one of the shepherds’ sheep, and studies have shown that children who play Joseph in school nativities go on to do great things. There is yet to be research produced on the future successes of those who played Joseph in Christmas market productions but it’s basically the same thing.

Daisy is correct, there are no ladders in the nativity.

Daisy is also unhinged. She has been completely brain-addled by the Christmas spirit.

It’s not a cult. It’s cult-esque, like a pyramid scheme.

Gluhwein is the German equivalent of Mulled Wine. It tastes just as bad as regular mulled wine but as per Christmas market regulations it’s served in a fun little commemorative cup.

You can’t drink away your problems Daisy! Not this one at least.

That is the face of a girl who has seen true horrors.

I love the delicate way that Ed is holding up his robe to run after Daisy. I also love that Ed is going into this encounter dressed as Joseph.

Ooh Cliff is a tricksy one. Is this what they mean by f**k around and find out?

Beautiful baby sack Jesus. He looks just like his dad doesn’t he?

I don’t remember there being a literal birthing scene in the nativity. I mean I understand there is a birth, we just don’t usually have to look at it.

I’m also 😦 that no one will be able to get their belongings signed by Hobo no. 3 from the Tooth and Consequences segment of episode 16 of The Twilight Zone (1986).

I can’t find any data on Funko Pop sales records but I did find out that Paul Scardino holds the current Guinness World Record for the largest collection of Funko Pops with 5360 figurines.

TL;DR means “Too Long; Didn’t Read”. It indicates that a passage is too long to invest the time in reading it. It’s why I am always so pithy, gotta get that Engagement™.

Perambulation basically just means walk. Dean went for a morning walk to buy a newspaper like a grandad.

Did you know that in Britain we still buy all of our newspapers from local street urchins? With Nickels?

A factotum is a person with a lot of diverse roles or responsibilities, like a handyman. A big awkward handyman, that reporter has really got Ted Gembel’s number.

What has happened to the Giftmaster 3000 Grotto that has led to it having sharp edges that need to be removed?

Chance’d be a fine thing is a phrase that originated in Yorkshire in the 1800s. It gained a little popularity around the 1950’s but it never really took off. It indicates that while the idea suggested – in this case, the provision of safety goggles – would be preferable, it’s extremely unlikely to occur. It’s best said while wearing a flat cap, for emphasis y’know. 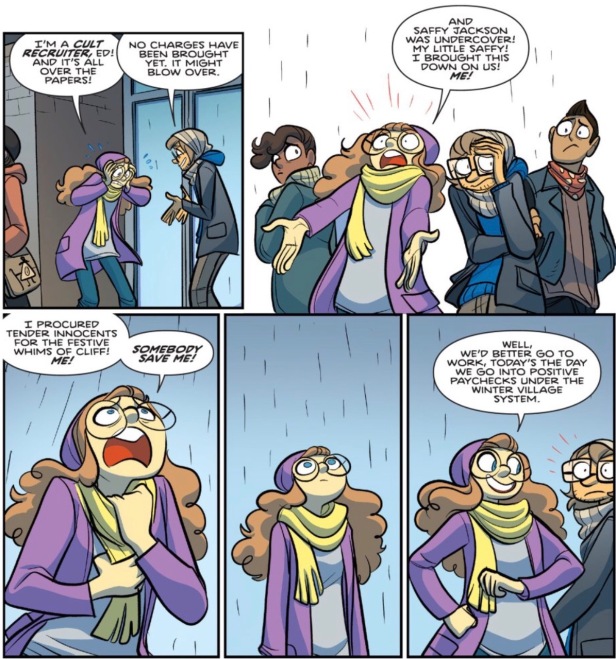 Incredible compartmentalisation. Just take a deep breath and stuff it all down.

Poor face melt Santa, out in the rain like one of those puppies in the sad adverts where they ask for money.

Sod is a weird word, it usually suggests that a person is being obnoxious or annoying, for example my nan – nanny babs – she regularly refers to me as a cheeky sod, but it can also be used for people you feel sorry for, as in the poor sod.

Door is gone. Maybe the door was never there.

I agree with McGraw, it’s the only logical explanation. Cliff is 100% an energy vampire.

I can’t imagine that there would be anything passive about the note that Susan would write.

Is that flirting? Is Saffy flirting?

Disgusting student house, I think I missed you and your inexplicable tower of empty cans.

A face like last week’s lunch means he’s got a rotten, or sour look about him. Miserable y’know? Face like a smacked arse.

It’s not for nothing, it’s all transferable. He’’l be glad of this experience the next time a job application requests an example of a time he risked his life for the company.

Or he could make a cake.

Laying drains in my daughter’s field might be one of the most horrific euphemisms for sex that I have ever heard. It’s more commonly phrased as laying pipe, but that doesn’t improve the situation.

I suppose we should just be glad that Alf is taking an interest in his daughter’s relationships and forget about the part where he said he wants to meet the guy who is sticking his dick in his kid.

That’s life Ed, never ending shifting debt, you just have to roll with it. Now rub the poor girl’s feet.

One thought on “The Annotated Giant Days #43: The Christmas Fair”