On March 1st 2021, Meredith Gran quietly dropped the first page of “Octopus Pie: The Other Side” onto her site, only alerting the world at large to its existence after the 38-page story was complete on April 8th. “The Other Side” serves as an epilogue to Octopus Pie proper, which ended its original run on June 5, 2017 and a re-release with author’s commentary on October 27, 2020.

Octopus Pie is a slice-of-life webcomic about two roommates and best friends (Eve and Hanna) living in New York City, and their friendships and relationships. Over the course of a decade, the two of them slowly grow and develop as people, and Gran’s skill as a cartoonist develops as she experiments with unusual page design, animation, and coloring techniques (eventually hiring colorist Valerie Halla to help with the last few chapters.)

In the nearly-four years since Octopus Pie ended, the real world has changed dramatically. The characters, too, age in real time, so when we see them again in “The Other Side” they’re all four years older and possibly wiser since we last saw them. As the main storyline of Octopus Pie reflected New York City at that moment, “The Other Side” reflects life as it is now, with masks on during morning runs and late night Zoom calls with the squad replacing real life parties. And yet, it doesn’t feel like an essential piece of the Octopus Pie puzzle, but more like an addition that enhances the story the way minicomic “On the Strait and Narrows” enhances Hanna and Marigold’s relationship to each other.

One of the many things Octopus Pie does well is end.

Many webcomics creators (and franchises outside of webcomics – I’m sure we can all think of an example or two), have difficulty letting go of their characters and stories once they’ve decided to finish them, and proceed to tell readers extraneous information about the universes they’ve created that no one particularly asked for or wanted, or retcon the original story to make it line up with current social mores. What Gran did instead was re-release the entirety of Octopus Pie’s story with additional author’s comments on each page, explaining what she was doing at that time, what she’s not satisfied with about the page today, and what the page might mean for the story as a whole.

This commentary does not detract from the reading experience but rather enhances it by contextualizing each page in different ways, as well as explained how some of the more technically ambitious pages were created. It also reveals that Octopus Pie’s awareness of time is an intentional creative decision. In her commentary on the second-to-last strip, released on October 26, 2020, she says “I wanted OP to end in the present moment: no tearful goodbyes, just an inventorying of what brought them here.”

The last page of “The Other Side” reinforces this idea further, as Eve declares directly to the reader “I give myself willingly to the present.” Staying anchored to the present, to the world as it is right when the pages are drawn, makes every page of Octopus Pie a time capsule for a certain kind of life in a certain time and place. It’s rare to read a comic that feels so real, even to people who have never experienced the lifestyles depicted within it. Octopus Pie does not mythologize the millennial New Yorker lifestyle the way other media often does, but depicts it as authentically as fiction can, shining a light on people and places that an audience could easily believe exist somewhere.

“The Other Side” has no author commentary attached to it at all, standing on its own in that sense, but at the same time building on everything introduced in Octopus Pie’s story proper: Eve and Will’s relationship, Marigold and Jane still going strong, and other less prominent characters like Jackie and Gwen reminding the readers of the last time they saw them in “People Seriously Live Here”. We see how the characters have changed since their last appearance and how their relationships with each other have changed. Eve reconnects with Gwen over becoming a mother, and Will and Larry are still close friends who help each other out even though they don’t live together anymore.

Other creators who continue beloved stories several years after they end reset or otherwise warp the status quo they had going on in the final scenes, trying to recapture the wow factor of their franchise’s glory days. In “The Other Side,” the characters are different, older, maybe wiser, but they’re still recognizable as themselves in the stylized, cartoony art… even though Eve is pregnant now, Will is clean-shaven and Hanna is states away from her former roommate/best friend. The threads that were tied up in the final chapter aren’t unwound for the epilogue but continued in a way that creates a feeling of catching up with a friend you haven’t seen in a while.

An occasional recurring thread in the author commentary is the idea that something could have happened between Larry and Hanna, that this was an arc Gran considered pursuing before the end of the comic proper but it just didn’t quite fit. In “The Other Side,” this possibility is finally explored more fully as Larry and Hanna connect one-on-one after everyone else left the big friend group Zoom call. The two of them catch up on what they’ve each been up to, and Hanna, stuck with her aging mother in wintry middle-of-nowhere New England, sends a risky text that leads to the two of them finally reuniting in person. 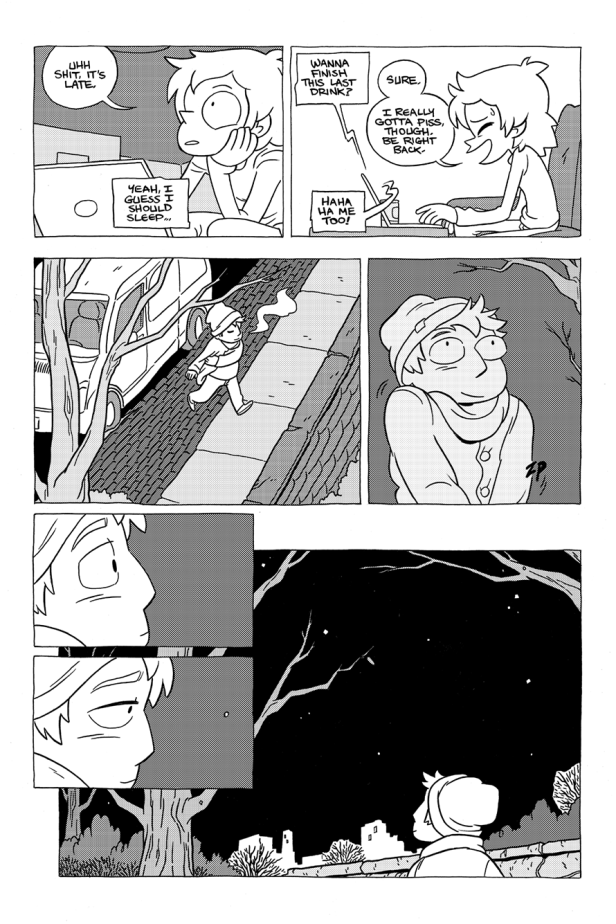 There is a sense throughout Octopus Pie that the characters are real, that they exist beyond the confines of the comic pages. That in the four years since the readers last saw them they continued to live and persist, unobserved and unrecorded by a cartoonist. Larry and Hanna’s friendship probably continued to develop somewhere off-panel in that in-between time, but was brought into focus in the epilogue by the power of videoconferencing and their finally compatible loneliness.

Octopus Pie is unique in webcomics for its commitment to representing the world as it is when the comic is created, without sacrificing artistic expression for the sake of that realism. By choosing to end it and then add a complete epilogue, Gran created a story that captures moments of times gone by and preserves them whole, avoiding the far more fraught path of retcons and reboots.

Octopus Pie: The Other Side
by Meredith Gran

Masha Zhdanova is a cartoonist, illustrator and writer whose work has been featured for sites including WomenWriteAboutComics. To find more of her work, you can find her website here – or follow her on Twitter here!

2 thoughts on ““I Give Myself Willingly To The Present”: With “The Other Side”, Octopus Pie Ends Well”