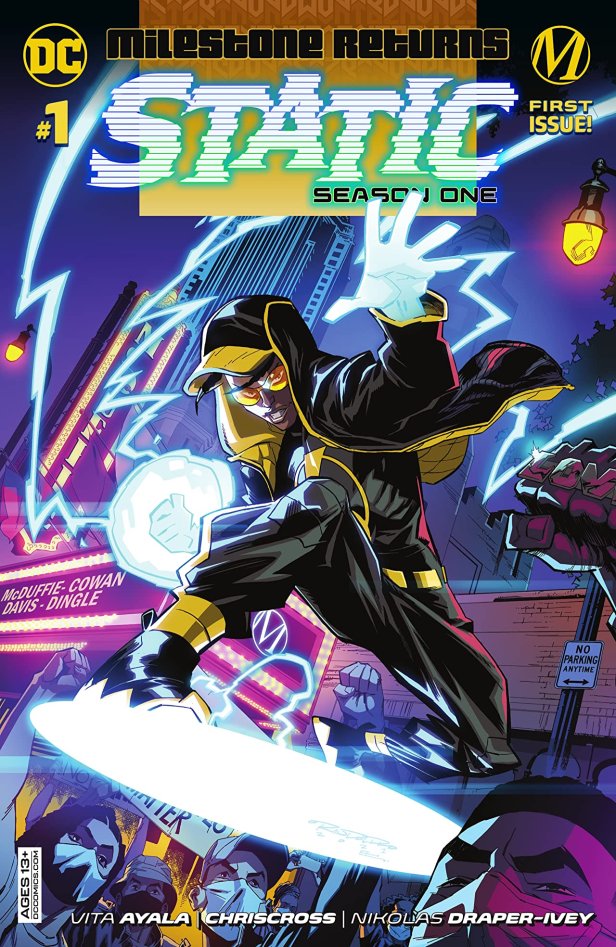 Before 2011, the closest thing to a Black Spider-Man was Static.

Virgil Hawkins was the nerdy Black teen who tried to juggle family, school and his dating life with a double life as a wise cracking superhero. Thanks to Dwayne McDuffie, Jean Paul Leon, and the iconic Static Shock cartoon, there’s a generation of Black kids who have nothing but fond memories when this character’s name is dropped – and it’s no shock that people are buzzing for him to be back (not apologizing for the puns).

But it’s 2021 now. Comics and the world have changed. There’s an actual Black Spider-Man and his movie won an Oscar. How do Static and Milestone as a whole adapt to an industry that has given a surface level commitment to diversity and inclusion without the depth that the original Milestone pioneered in the 90s and barely anyone at the Big Two has touched since?

I’m sure there are people out there who wonder why Milestone is back when there’s so much diversity in mainstream comics and those people have suffered from the low bar of “diversity” these past few years have given us. It’s one thing to have Black and Brown characters in these universes but to have them poorly written by various white people putting in a bare minimum, so by comparison 1993 Milestone looks like a dream. But again, it’s 2021 and Milestone is back. This relaunch could either “adapt” and regress to that surface level representation, they could sit back and play the classics, or they could take stock of the time, bring in new talent and put down that Milestone magic. Where does it land? It’s hard to say, but Static #1 is a promising start.

Milestone’s relaunch has been a long teased event that occasionally filled me with dread. Milestone was of course incredibly important and remains so to this day, however the world ages and creators do as well. A Milestone relaunch spearheaded by the old guard that spoke well to their time will likely not do the same today. Regional Hudlin and Denys Cowan are involved in setting the stage for this universe but they aren’t playing with all the toys. Fortunately for us and for Static, that honor instead goes to Vita Ayala, ChrisCross and Nikolas Draper-Ivey.

At this point in their career, I would have been concerned for this relaunch if Ayala wasn’t involved – and the fact is that their writing Static is an incredible choice. Their runs on Children of the Atom and New Mutants have been a monthly masterclass on empathetic and thoughtful scripting of young characters that broach uncomfortable and resonant social questions. All in all, an excellent writer to tackle writing this contemporary take on Static.

There are a number of elements that this creative team contend with to make Static #1 a contemporary retelling. The more subtle and maybe most difficult one is form. Thanks to the stage-setting Milestone Returns #0 this first issue reads more like issue #1.5, which makes this issue feel like it’s missing a piece of the story. While it’s covered moderately well, this hindrance on accessibility has been discussed in an excellent criticism piece on this site. Static #1 is also a decompressed story which very much feels like a more contemporary direction echoing the work of Brian Michael Bendis on Ultimate Spider-Man. Ayala discusses that the goal of this story is to see ”how does this boy rebound and heal enough to become the Static that we know and love?”. This story plans to take a longer walk for Virgil to become Static in a way that is very different from the original book, giving us Static first, Virgil second.

The other major change, which is much more controversial, is “The Big Bang.” This event gives Dakota a majority of its superpowered characters and serves as Static’s origin, as covered in the Milestone Returns #0 issue.

Originally, the event was centered around a gang shootout that got dispersed by the police using experimental tear gas from Alva Industries — however this re-imagined version of the incident sees the gang event shifted to a Black Lives Matters protest. It’s a contentious update for sure which other critics have discussed elsewhere. Virgil’s involvement in gang violence added a really fascinating shade of grey to that character’s origin and on a surface level the alteration can feel like a cheap way to tag into the current moment or worse can feel like an uncomfortable equivalency to draw.

Despite these concerns, Ayala and the team really sell this update as much more than chasing the current headlines. Static #1 stays with the trauma of that event and the damage it did to the community. The fault is very much still within police brutality, and is made all the more grim by maintaining that this was a student protest and a lot of these kids didn’t survive. It’s genuinely dark and the recap of it really speaks to a sort of memory hole people have for last summer’s protests and the disregard for the continued horrors happening now.

It feels like we are forgetting all of the horrors and violence that occurred last summer, the eyes lost and the people killed at these protests. A white man killed Deona Marie at a protest for Winston Smith all too recently and it feels like it was barely news. Virgil processing this trauma and violence that no one else seems to understand or want to acknowledge really resonates and Ayala refuses to let any of this feel cheap. Milestone as a line was never shy about speaking on the issues of the day and while it may feel played out and exploited in a lot of other media, to have Milestone come back and not sit earnestly in the moment we’re in would feel disingenuous to what Milestone has always been.

Despite the changing contexts, the characters still ring true to their previous incarnations, with particular standouts being Virgil’s family. Virgil’s father remains the staunch patriarch, and his sister still gives him a hard time despite caring for his best interests. It’s really easy to hear the voice actors from the cartoon speaking through these characters, in fact, which I’m sure would bring familiarity to casual fans. A slight change here is that Virgil no longer has a double life from his family and close friends – which falls in line with more recent younger heroes like Miles Morales and Ms Marvel whose families are aware and more or less supportive of their extracurriculars. This doesn’t mean the people around him don’t worry, and the drama of not having that double life is evident in this very issue with it’s incendiary cliffhanger. On top of this expanded cast, Ayala’s voice for Virgil’s inner monologue is strong. They really put us in his head and I really enjoyed the description of the “buzzing” in his head as a through-line.

The combined art team of Chriscross and Nikolas Draper-Ivey make a strong if not controversial showing. It’s been noted online that characters are a bit too light skinned and while it’s definitely been an ongoing issue in mainstream comics as a whole, Draper-Ivey plans on addressing the issue. I don’t see that heaping criticism on one receptive Black artist – rather than the many non-Black colorists and editors who don’t care – is the correct way to address this issue.

Despite those concerns, the artwork in Static #1 is invested in the story in both the small and large scale. It’s very evident that Draper-Ivey has put a lot of thought into the character design of every character with everyone’s look feeling very contemporary which is a shameful rarity in a lot of current comics. His attention to Black hair is something that’s also so important, especially the many styles we see Virgil in throughout the issue.

On the macro-level ChrisCross and Draper-Ivey pour so much incredible energy into the action beats. So many of the panels feel like stills from the most hype anime a friend will tell you about and I know so many Black nerd friends who are going to eat that up – although also a substantial amount who might be put off by the stylization. Going in I didn’t think the direction would work for me but on the whole I really enjoyed the energy and cinematic quality to the artwork. Also Virgil’s powers have a literal “static” effect, which I think is excellent.

Bringing Static back in 2021 was always going to be a challenge but Static #1 puts a strong foot forward to find who this character can be to a new generation of readers. This team manages to appeal to fans old and new and explore how to set this title apart from the more recent diverse array of heroes on the stands. All of this without sacrificing what makes Milestone Milestone. It’s the rebirth of the cool and I can’t wait to see more.

Kenneth Laster is a cartoonist and critic who has written for sites including Multiversity, ComicsXF, and Comic Book Herald. You can find Ken’s comics available (for free!) here, and follow Ken on Twitter here!