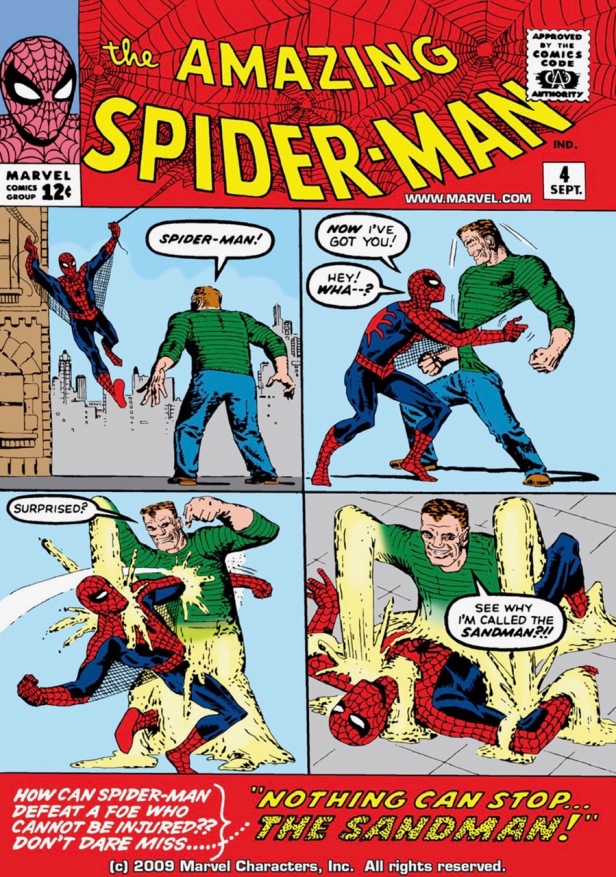 Reposted with permission from the Daily Bugle

Loyal readers, we stand on the verge of a crisis, and if we are not vigilant, we may well fall into outright anarchy and chaos! I speak, of course, about that web-head menace SPIDER-MAN, whose latest crimes have potentially devastating repercussions for the future of our proud American education system!

If you’ve been buying the Daily Bugle, New York’s only trusted source for news and the #1 publication in our wonderful country, then you’ll have been following the crimes committed by SPIDER-MAN throughout our city in recent weeks. Dressed in red and blue – and excuse me, but what kind of spider is so brightly coloured? Only a deadly poisonous one – this pest has been swinging through our city, engaging with criminals, and getting away with it all scot-free!

It is my sad duty as a journalist to inform you that yesterday I saw his latest deeds with my own two eyes, as he and the latest criminal on the block SANDMAN were both sighted at our local school, where the next generation are innocently attempting their studies in order to become upright members of our society. Well clearly SPIDER-MAN failed to attend his own studies, for I was witness to his DESTRUCTION of several parts of the school as he and SANDMAN pretended to fight each other!

To what end? To throw us all off the most obvious point: that these two criminals are in fact WORKING TOGETHER! As they raced through the school, throwing doors off their hinges and damaging both classrooms and laboratories, your intrepid reporter spied that SPIDER-MAN was PULLING HIS PUNCHES throughout the battle! Why would he hold back unless he was secretly allies with SANDMAN? Their escapades resulted in the wanton damage of public property, with your children caught in the crossfire!

I was dismayed to see our once-unshakeable officers of the law fearful to go into the scene of this “battle” – because they were scared to be involved with these two hardened criminals, or because they are being paid off? My friends, I do not say this lightly, but as a tax-payer I must question what the boys (and gals) in blue are doing to earn our hard-earned money if they are so unwilling to capture criminals I their midst. Why is SPIDER-MAN allowed to roam the city at will, taking the law into his own hands??

If my son the astronaut wasn’t busy training for his mission as an astronaut, then he would have words to say about this very sorry situation!

In the end, the SANDMAN was “captured” by SPIDER-MAN and handed to our police. In what form? In the form of a vacuum cleaner! Readers, I think they really want us to believe that SANDMAN was actually in that vacuum cleaner!? But what more obvious way for SANDMAN to make an escape than to make us all believe that he was held hostage in cleaning apparatus? Mark my words: he will be back, and when he returns, SPIDER-MAN will be right there with him!!

I urge you all to remain vigilant! At the end of this hand-typed editorial you will find a petition to make our useless mayor pay the school for new equipment – vacuum cleaners do not come cheap, and I don’t see SPIDER-MAN offering to cover the costs he incurred during his “fight”. If you see any sightings of that sinister SPIDER-MAN, send them to the Daily Bugle’s office immediately.

Our officers may tremble at the sight of New York City’s new criminal element – but I, J. JONAH JAMESON, will never shirk my duty as a reporter!