As it’s set in England, though, and because Allison has such strong instincts as a writer, there are a lot of jokes and references which might fly over the head of the international audience. Here, then, are our annotations to help guide you through life at Sheffield University, provided by our new Head Annotator Kelly Richards!! 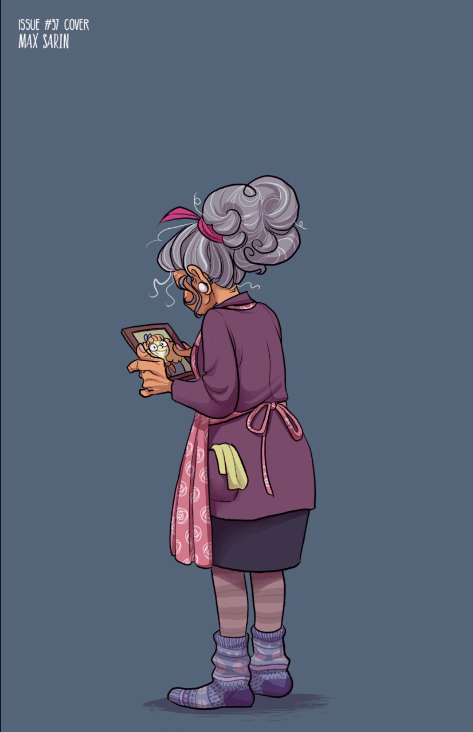 A+ cottagecore aesthetic, supreme curb appeal. Cottagecore, for those of you who are not terminally online, is an aesthetic inspired by a romanticised interpretation of western agricultural life.

Daisy is wearing yellow, literal sunshine in human form where her gran is wearing blue, the colour of sadness. Also they have matching hair ties which is cute.

Ahh, the old cold shoulder. Granny’s really making sure that Daisy knows she’s messed up without letting her know how.

Giant Days always has the best fake cereals so I hereby dub this segment Cereal Watch! Here Daisy has MMM Cereals. It’s a ‘crispies’ type cereal with a white rabbit mascot. Daisy appears to be using the classic cereal then milk method of preparation, most likely because she’s not some sort of ne’er-do-well.

My favourite kind of coming out is the type where the person you are telling or who has been told somehow makes it all about them and how you have somehow made them look and/or feel bad by not telling them sooner. Really classy move.

Little bit of biphobia, just as a garnish.

It’s the “I don’t care” which is the rudest, most upsetting part of the scene. Being dismissed like that is cruel.

And anyway Tackleford is in Yorkshire, leave the people be Esther!

I had my team run some data on this and they’ve reported that cream then jam is the preferred option!

A fugue state is a dissociative disorder. Aphasia is a language impairment. I don’t know what Esther thinks is actually wrong with Daisy but it at least sounds very serious.

Esther references the song Communication Breakdown by old timey English rock band Led Zeppelin. Both Wikipedia and my husband assure me that Led Zeppelin are a Very Important band. I can neither confirm nor deny this.

I really enjoy how Esther’s advice is literally proven wrong as she states it, given that she tries to run away from her boss and gets caught in the middle of it.

Daisy knows to roll, not fold when packing a bag. Rolling – as all frequent packers and organisation aficionados know – not only saves space but it stops your clothes getting all creased up.

The leaving of a note is a good example of proper running away from your problems etiquette.

Patron Rob Brewer tells me that this is a Class 222 “Meridian”, from the old East Midlands Trains line.

This seems like a good time to tell you all about a lady I once sat next to in a visual cultures lecture who clipped both her finger and toenails directly onto the floor of the room while the professor was speaking.

It’s nice to see she’s putting her studios to good use by determining she needs to be less healthy.

Student accommodation outside of term time is hauntingly quiet.

What is that creature living in a bottle in Susan’s room??

Patina she says! Patina is a thin layer of wear/erosion/polish/grime that collects on metal/wood/leather. It is not a thin layer of dirty clothes and dishes on every available surface.

I’m not a doctor, but I’m pretty sure that the hippocratic oath – an oath of ethics taken by physicians – isn’t “I’m lovin’ it.”

I trust Justin Timberlake more than any “Doctor”.

Once again, I’m not a doctor, but I’m pretty sure that the hippocratic oath – traditionally attributed to Hippocrates (460-370BC) – isn’t “Because I’m worth it.”

Bijou means small and elegant, not tiny and shite.

I would move into the house with the evil presence. Look at that nice floor! And the footprints on the ceiling are charming.

That man has a fake beard, glasses, nose, and a pillow up his shirt. He seems trustworthy.

Wait no, I take that back, everyone is wearing matching hoodies, it’s a cult.

Nice garden though. Worth it IMO

Who among us hasn’t climbed atop a storage unit in a stock cupboard to hide/cry/play on their phone?

Sleeping on the floor next to someone who is snoring does suck.

Has Susan used sellotape to stick posters to the walls? What chaotic energy.

Extreme Brasso scent memory at the mention of polishing brass. Brasso is a liquid used to polish brass and copper. It smells like ammonia and burns your eyes and it’s supposed to be used in a well ventilated space but that never stopped my nan sitting at the table in the living room for hours and polishing all the brass.

Is that logo on Daisy’s bag anything?

Hey look, that IS the Sheffield University accommodation office! All that glass, so modern.

My favourite type of security guards are the ones who will let you do anything so long as you stop bothering them.

If you work in any student facing role you will spend at least 30% of any given day playing therapist.

PG Tips is the bad tea. It tastes like it’s been cut with dust and cigarette ash and it used to be advertised by literal chimpanzees. In the north we drink Yorkshire Tea exclusively. I knew it was a good idea to bring you on the team, Kell.

Any worthwhile university has a bunker which houses an old old wolf.

Of course Daisy is a Brownie leader. The Brownies are the section of the Girl Guides that is specifically for girls aged 7 to 10 years old. I’m not sure what they actually do – I went once thinking it would be campfires and knives but it was actually housework and praying so I did not return.

I bet getting told off by Daisy is like when Paddington gives you the hard stare. The shame you feel will be unparalleled.

She’s talking about her archaeology tutor from back in issue #17. He was never right again.

Yes, I do believe that it was Dr. Ben Spiderman who coined that phrase. 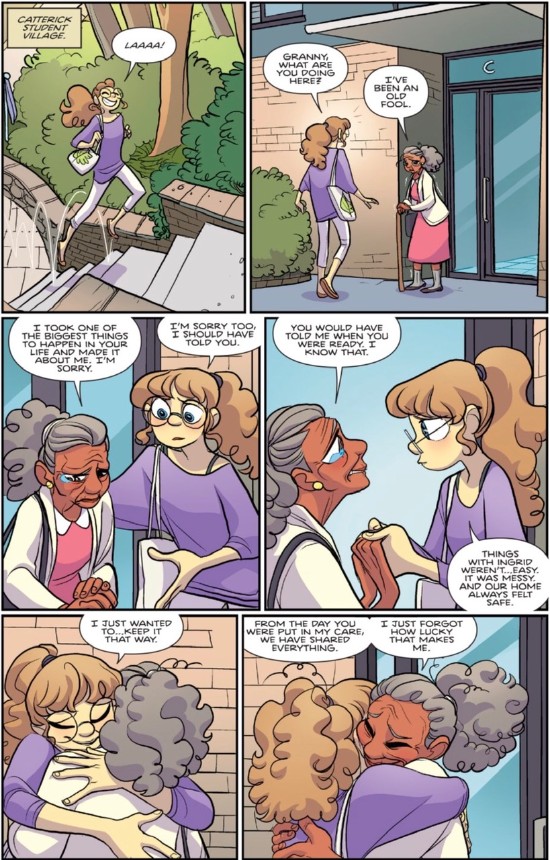 Daisy can’t help but tidy. It’s a compulsion. And the technique on that sleeping bag roll!!

One thought on “The Annotated Giant Days #37: Daisy Comes Out”