Jefferson Pierce is a man of many talents: he’s an Olympic level athlete, high-school teacher, family man… and the superhero crime fighter known as Black Lightning.

His mighty introduction is also a historic one, as he holds the title of being DC Comics’ first Black superhero with a title all his own. With the recent 2020 release of The Other History of the DC Universe by John Ridley exploring the character’s entire history, looking back on his beginning is eye-opening – and shows why he stands tall as the first Black superhero to have a comic book at DC Comics.

In 1977, DC debuted several characters that fit into the war and military genre, including Sgt. Rock, Unknown Soldier, Jonah Hex, and Men of War, Meanwhile, Black Lightning was a new street-level hero who began his new #1’s opening page by fighting Members of The 100, a group of high-tech assassins. Dialogue boxes remark on the hero persona that Jefferson has to put on in an attempt to distance himself from his normal life – which emphasises how he’s decided to tap into the Blaxploitation era to present himself as an over-exaggerated hero, as he takes down those who stand in his way with extreme prejudice. Notably his costume, mostly designed by Trevor Von Eeden, attaches an afro to the character’s mask, as a way of further hiding his identity. 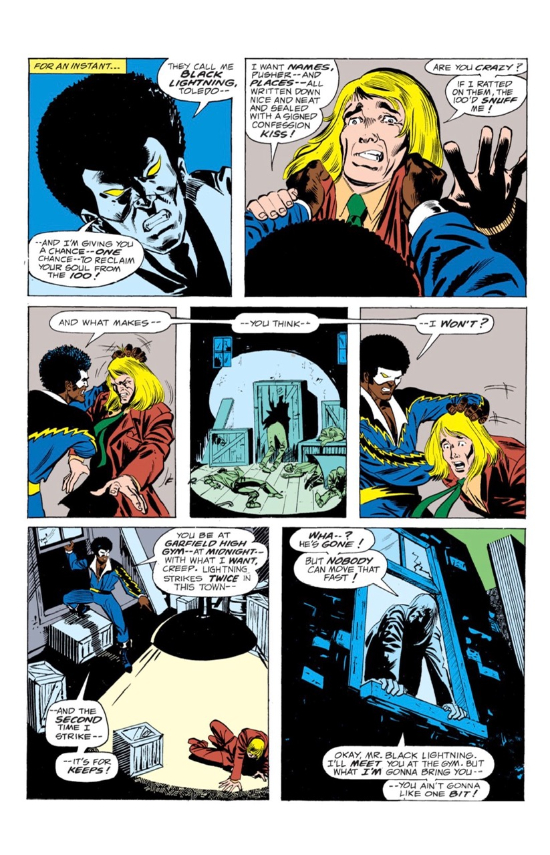 This is the earliest distinction we have between Jefferson and Black Lightning. When he’s dressed as a superhero he is clearly shown as being angrier, willing to bust heads and talk smack to his foes. By comparison, Jefferson is a much more proactive part in his community – he works as a schoolteacher. Black Lightning’s brand of hero speaks to the times and influences that artist Von Eeden instilled in his original costume – although in a later interview Von Eeden said:

On Black Lightning–I did NOT design the Afromask! I say this because in the ’70s, when he was created, the Afro was a black man’s symbol of pride, and self-respect–his singular identity. For a black super-hero to remove his hair (or…put ON his hair…) as part of his identity was certainly…odd. For a black man to do so was, shall we say–tellingly symbolic. And definitely not MY idea. But–that was compensated for by the fact that in his secret identity, BL was…a schoolteacher!!”

At the very least the push and pull of Jefferson’s two lives highlighted the duelling positives and negatives of a white creator guiding the roles of a Black man in his community. Writer Tony Isabella, as Black Lightning’s co-creator, had previously successfully scripted adventures at Marvel involving Black characters such as Luke Cage, Misty Knight, and The Falcon… before almost writing the messy stories of The Black Bomber for DC. The Black Bomber would have been a white racist who would turn into a black superhero under stress – luckily Isabella successfully lobbied to use his partially developed Black Lightning character instead, which was the best result for everybody concerned.

However: even though we escaped that outright offensive concept DC initially presented to Isabella, there’s still something that’s inherently missing when a Black man is presented by a non-marginalized creator – much less a white creator who does not have the life experience that should inform a character like Jefferson. There’s a very specific nuance missing from the first issue that I believe stems from Isabella, a white creator writing. We’re missing the unique wrinkles of care that a Black Writer could provide.

Isabella doesn’t falter outright, but instead he guides Jefferson’s life and tragedies in a more general way, not focusing specifically on his Blackness and what that means. It leaves Jefferson as a realised character, but not a recognisably Black character: how does Jefferson, a Black man at the top of his game, feel about his city being littered with crime and battling it as both himself and a superhero? We don’t know. With the exception of a character called Peter Gambi the majority of the cast are Black, and there’s culture and speech there that a Black writer could have keyed in.

Having said that, we should note the colors by Liz Berube, which compliment Von Eeden’s art by coloring Black skin and citizens in their correct shade throughout – no simple thing. And for his part Von Eeden draws everyone – specifically the Black characters – in the style of the 70’s.

After the opening page of Black Lightning punching and threatening thugs, we then really learn more about him. During the day Jefferson Pierce is a well-regarded teacher who wants the best for his students. He’s settling into his role at the high-school when he notices a pusher harassing one of his students – and his inner hero shines through as he effortlessly shuts down the thugs that try to attack the students. The creative team want us to see that whilst Jefferson is a stern figure, he’ll also do what’s right with no problems at all – he’s a hero inside or outside of his suit. He’s a central figure in his community, for better and worse, and the opening issue shows us his never-ending battle in the Suicide Slums – the upbeat name for the community he lives in. It’s positive to see this Black character portrayed as a figure of hope.

The issue ends with both Black Lightning and The 100 gearing up for a battle at midnight, and it definitely leaves you excited for what’s to come from Black Lightning and how he deals with this looming threat. As an introduction to a character, all of the makings of this new corner of the DC Universe can be found fully-realized in Black Lightning #1. While we never delve into the mind frame of Jefferson as a Black man (and an exceptional one at that) we do get enough character work into his state of being and his mission of helping people. There’s both distinction and overlap with his two competing lives, and the creative team do well showing where Jefferson holds back and where Black Lightning lets loose.

Over the years, Black Lightning’s profile has steadily rose, I’d say, especially with the arrival of his television show; inclusion and larger role within the Young Justice cartoon; Isabella’s return to the character in the mini-series Cold Dead Hands; and now as the central character for John Ridley’s take on the DC Universe. We’re finally seeing the untapped depth and exploration of DC’s first major Black Character, which this initial series teased us with.

Terrence Sage is a writer and critic who has had work published for sites including Comicosity and Pop Culture Reviews. For more from Terrence, you can follow him on Twitter here!