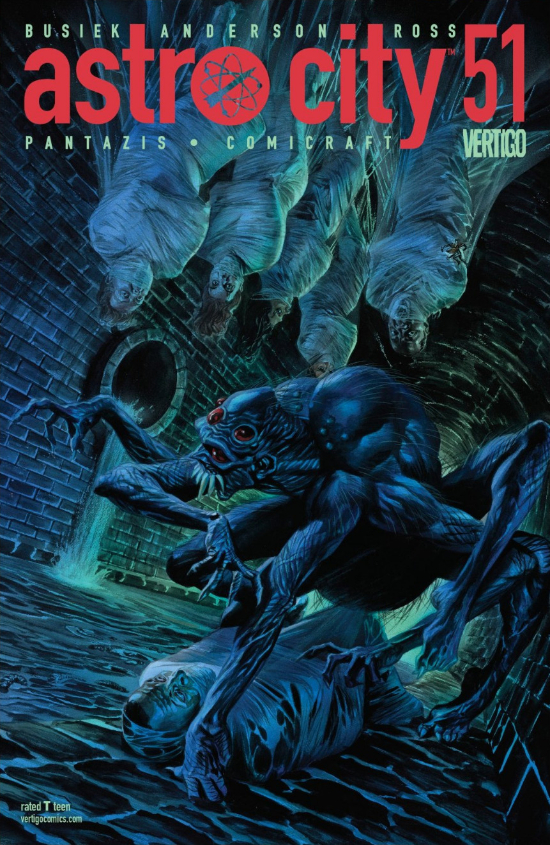 The genre, being what it is, proceeds onwards, unable to comport itself entirely to our individual tastes, and so there’s things we either accept or learn to live with. The way that superheroes can manage to be authoritarian and lawless at the same time. The way that timelines have to do backflips and somersaults to make sense. Death being a revolving door. The ethics of a secret identity.

My own line, is civilians getting hurt, maimed, or killed. Personally, I like it when someone from some neutral observation post, like a reporter or a government handler, shows up and looks at the aftermath of a superhero fight, with torn up chunks of pavement and cars sticking out of apartment buildings, and goes “well, thank God no one got hurt.” Unrealistic? May I direct your attention to the people flying around.

If people are getting hurt in a cool superhero fight, it stops being a cool superhero fight, and you start analyzing ballistic patterns and debris fields and asking yourself if, in every panel, in every minute, in ever paragraph of the fight, the superhero really truly did all that they could to keep people safe, and if you conclude that they didn’t then you ask if they should be punished for failure and what that punishment should even be, or even if they were right to prioritize kicking the shit out of a supervillain instead of protecting civilians, and should we even be enjoying simulated violence in the first place, and then before you know it you’ve started deconstructing the genre.

And the other part of the essay from the first trade paperback of Astro City was about deconstruction. It goes as thus:

… the superhero has been dissected, analyzed and debunked, his irrationalities held up to the light to show them for the unworkable Rube Goldberg machines they are, that it’s almost impossible to present a superhero who does what he does without being emotionally unstable, incapable of dealing with reality without “acting out” his psychoses and obsessions. But it strikes me that the only real reason to take apart a pocket watch, or a car engine, aside from the simple delight of disassembly, is to find out how it works. To understand it, so that you can put it back together again better than before, or build a new one that goes beyond what the old model could do.

We’ve been taking apart the superhero for ten years or more; it’s time to put it back together and wind it up, time, to take it out on the road and floor it, see what it’ll do.

So this is a difficult story in some ways. Its opening sequence isn’t straight out of The Boys – Samaritan is wearing pants, for one – but it’s a little closer than I was expecting.

That said, for all my grousing about deconstruction, I know that there need to be stakes, and that sometimes – not always, not even often, but sometimes – you need to establish those stakes by showing the price of failure. Gwen Stacy may be all but resurrected by now, but she died before I was born. It is, by now, part of the genre. And a story about superhuman trauma is a good place to dig into it. 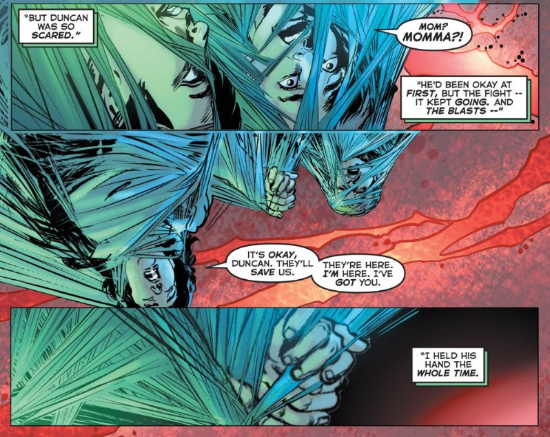 This sequence hits like a dagger to the heart.

This comic introduces us to Rose, who suffered unimaginable tragedy when some spider-like alien kidnapped her and her son. The group, Michael included, does its best. Rose finds herself being pulled into the group, into its routines and discussions, and Michael feels at ease as things settle.

And then the rug is pulled out from under him, as Rose shows up one day and tells the group that there is no record of the woman that Michael named Miranda’s Friends after. She accuses him of being a fraud – a voyeur into the pain of their lives. And Michael has to defend himself, and in so doing, he recounts how he remembers living two lives; one with Miranda and one without. He digs up his trauma for the sake of other’s satisfaction – the accusation he was just hit with – and he endures the worst thing a victim of trauma can endure:

He is not believed.

What strikes me, in this comic and the next, is how the narrative doesn’t villainize Rose. From her perspective, she’s uncovering a fraud; Michael is never fully angry with her and tries to explain what he’s gone through. And that makes it hurt all the more, because no one can hurt you like a good person who just doesn’t understand what you’ve gone through.

Michael has no easy answers – how could he? And then everything is interrupted when he gets an emergency alert, and winds up running towards a calamity, instead of away from it.

Why he does this – and what it means, for him, and for the genre itself – is next week, in the final part of this fifty-two part series.