So full disclosure, when Steve Morris asked for my top single issues of all time: Astro City ½ – “The Nearness Of You” – was on my list.

It currently sits at #2 on Shelfdust’s list of all-time great single issues, which is a towering achievement for any creator considering the company it’s in. It’s not hard to see why. In a scant fifteen pages, it tells a tale that works pitch-perfectly on two levels at once: as a simple story of someone trying to figure out the mystery of a memory they can’t have, and as a meta-commentary on how even if you retcon someone out of existence: someone will always remember them.

A followup to a story this universally acclaimed would be just tempting fate, but this run of Astro City has done well by its followups thus far. And that’s where this story begins – with us catching up with Michael, twenty years later.

The first thing that leaps out about this story is its pacing. It’s only by the third page that the main character speaks at all, as he picks up some donuts on his way to his job. He puts out ice on the sidewalk, refills the coffee, makes sure the chairs are just right. If Astro City ½ – and indeed, much of Astro City proper – is a testament to the power of the done-in-one, this is the opposite, a display of what can happen when creators take the time to simply let the silence speak volumes.

It works; I am instantly intrigued by what Michael is thinking. How does twenty years of remembering a woman who never existed shape your thoughts? I want to know, and this issue draws me in by going: not just yet. Let’s give him some space.

People come into the picture, pleasantries are exchanged, and they talk about their days, and gradually, it becomes clear: Michael is running a support group for people who have had terrible experiences with the paranormal and the superhuman. 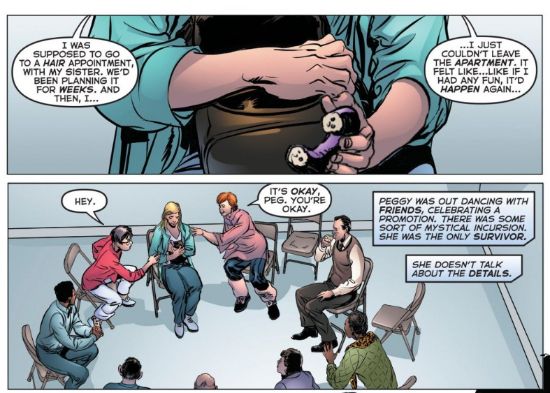 The superhero genre has been doing something of a self-examination as to how it relates to mental health; sometimes gracefully, and often times not. Outdated ways of looking at things such as psychosis and dissociative identity disorder are, hopefully, on their way out; I wouldn’t be surprised if by the end of this decade we see the end of Arkham Asylum, either due to changes in how we assess mental illness and how it’s stigmatized, or due to direct market comics no longer existing.

The effects of the past couple of decades on collective mental health are beginning to be felt, for reasons that are hotly debated; the rise of the internet coupled with its documented effects on mental health, the after-effects of a traumatizing couple of decades starting with the loss of the Twin Towers and ending with a once-in-a-century pandemic; or simply society giving consideration to its assumptions and adjusting them, since mental illness was not invented in the 21st century and has been historically dismissed.

A lot’s been said that a superhero universe would be a traumatizing place to live. It’s not wrong. But our world is traumatizing too, and that’s why all this resonates. My own struggles with mental illness are beyond the scope of this review, but I will say this: I don’t know what it’s like to be subject to a magic spell that feeds off my happiness, but I know what it’s like to feel like I don’t deserve to be happy.

It’s clear that Michael has been doing this for a while – he runs multiple groups in a day – and he’s being bankrolled by someone who approves of what he’s doing, in a manner as quiet and gentle as the rest of this comic. It all adds up to a sense of gentle equilibrium; Michael is in this routine because he’s in this routine, and he can stop whenever he wants, but he has found, if not happiness, then purpose. Which is one way to deal with a traumatizing event.

And in his evenings, he sits and he paints Miranda from memory – all that is left of her – and he feels the presence of the one who helped him as much as he helps others. 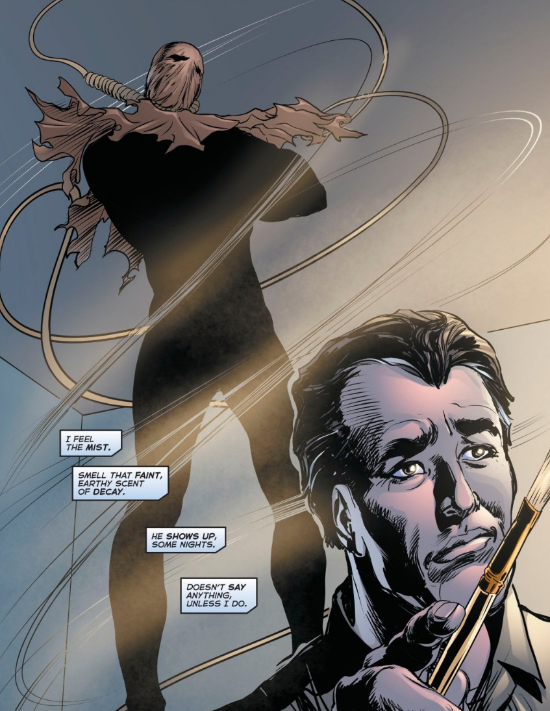 What does the Hanged Man want? What is awaiting Michael’s group? The story could end here, a done-in-one sequel to the original story. But there is more to tell and more to come, as we approach the penultimate issue of Astro City (thus far.)