Listicles are the most powerful thing in the world. On the internet, nothing gets more readers than a ranked list: that’s why every website eventually gets bought out by some random company who fires all the writers and replaces them with top-ten listmakers. If given the choice to read a lengthy essay about a comic or a top ten list which ranks the best characters in that comic, people will typically choose the list. It’s short, it’s snappy, and it’s entertaining. And people put so much stock into them.

I’ve written for several websites which flourished because of lists: many of my obscure unread columns about self-published work were subsidised by listicles which told people the ten dankest Hulk memes. And it’s the power of lists which powers Assassin Nation, an action-comedy series by Kyle Starks and Erica Henderson (who is defiantly playing against type after years of drawing Squirrel Girl). The first thing you get to see inside issue #1 is a list of the current top-twenty assassins, and it’s there as an immediate guide for readers. Not only is it telling you who the various characters are, but it’s allocating each of them a points score. Each assassin as a commodity rather than a person, in the process giving you an indication that they are a product, prone to dropping up or down the charts depending on their performance.

And as happens whenever somebody ranks the top twenty strongest Marvel characters, people spend days complaining about the minutiae – but in turn give the list more and more power as they do so. The more people complain about a list, the more they’re thinking about it, and the more value the list gains as a result. If somebody puts out a list of the best Batman moments and nobody pays attention to it, the list doesn’t have any impact. If somebody makes a list of, say, the top fifty #1 issues and it provokes conversation, complaint, and outrage? The list seems more legitimate to people, even if all it brings about are complaints about how badly-chosen the list is. And despite this top twenty list of the best assassins containing several faults, the majority of the assassins treat it deadly seriously. 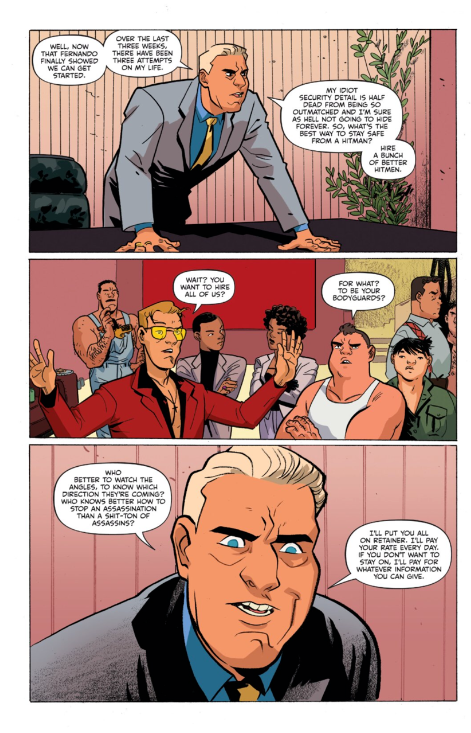 That’s the exact same mindset which Boss Rankin comes into the issue with. After being the target of multiple assassinations, he decides to try and hire all of the top twenty assassins to protect him. He’s not aware of who they all are or why they’re in the list (and he has several complaints with the list, in fact) but because they made the list he assumes they must all be important. He questions the choices in the list – like Smoke, who is in the top five despite not being a man – but never the list itself. That list is to be respected. There’s a reason his surname is “Rankin”, after all: he takes lists very seriously. Presumably, he reads a lot of CBR. It’s the sort of thing which comic book fans are often accused of… being so obsessed with stats and figures that they don’t take time to appreciate motivation or context.

The list’s influence continues across most characters. The fourth-placed assassin, Fingerman, dismisses anybody who is below him in the list… but later on when a firefight breaks out, Rankin turns that back round on Fingerman by saying that somebody in the “top five” should be better at their job. Everywhere you look in the comic, people are influenced by a simple list.

But it’s not even like the list is some sacred, accurate thing: one assassin says he’s only ranked so highly because he performs a lot of mercy kills – so he’s clocking up a high death count, but it’s not exactly like any of those kills are a challenge. He’s placed sixth in the rankings, having recently climbed up seven places – ahead of several more brutal operatives. During the fight, he cowers behind a sofa whilst the other assassins engage in their massive action set-piece. You get the impression that being a top assassin is less about killing a lot of people and more about not putting a target on your chest.

Case in point: our central character here is Maxwell Bishop, who is introduced as a pragmatic fighter. When he gets a gun, his first move is to kill his three friends, who are placed in scattered positions in the top twenty list. He doesn’t go after the top-rated assassins: he goes after whoever seems to be the immediate threat instead. Throughout, he’s shown as being as uninterested in the list as Rankin is obsessed: they were both once ranked as the #1 assassin in the world, but Rankin is unable to move away from those “glory days” whilst Bishop gladly moved out of the business entirely and retired. Bishop, in fact, isn’t in the top twenty list at all because he retired, making him a strange x-factor for the comic. Why is he even there, if Rankin is wholly motivated by hiring the current best of the best?

By the end of the issue, most of the assassins are dead, with only a handful left standing. They’re almost all people who keep to one side during the fight, uninterested in improving their stats. Rankin may be unimpressed by their lack of action, but it’s shown to be the best way to stay alive. Almost everybody in the middle of the firefight is taken out, leaving around eight assassins left for him to hire once the fight finishes. By the end of the story we’ll see the top twenty list again, and obviously it’ll be very different by that point – but its influence extends across the next five issues, causing chaos and inspiring a lot of people to kill one another.