Welcome to Spider-Man Roulette! Shelfdust’s Patreon backers were asked to pick a number at random – and now I’m going to write about whichever corresponding issue of “Amazing Spider-Man” they chose! This issue was picked by Patreon backer Kieron Gillen, who chose number 450 for the roulette!

Okay, yes, so there isn’t an issue #450 of Amazing Spider-Man, because the series got relaunched just before it reached that anniversary. Why did they stop before an anniversary issue? Who knows! Don’t think about it. Instead we’re going to take a look across at issue #9 of Amazing Spider-Man’s second volume, which is maybe the 450th issue outright. The numbering is always somewhat out of sync, but this seems to be about right. And you know what issue #9 brings us? CLASSIC MACKIE.

I saw this comic spin round on the massive invisible roulette wheel and had no idea what to expect. I associate John Byrne with his modern-day persona (which is not a good persona!!) and I associate Howard Mackie with all those other 1990s comic book writers who everybody loosely groups together in their mind as a single gestalt entity which wrote mediocre comics for a decade. Oh, and make up the majority of Bob Harras’ modern-day hires. So I really didn’t know what it’d be like to see them working together.

What I certainly should have seen coming is that the issue looks spectacular, honestly. Byrne is still an impressive draftsman, but here he’s backed by Gregory Wright, who puts so much life into the issue. The story here is that somebody is going round and murdering all the people who were on the scene when Peter Parker was first bitten by the radioactive spider, and their preferred murder method is to do an arson. The first few pages of this issue, as a result, take place with a fire in the backdrop, and Wright brings energy to the entire scene. The reds of Spider-Man’s costume are stronger than I’ve seen them before, and contrast against the blues and oranges which make up the backdrop of the house fire.  There’s strong Preacher-era Matt Hollingsworth energy to the pages, surprisingly.

It absolutely must be noted that the first person on the hit-list this issue is a man called “Jonathan Rickman”. He has one eye, he has a little goatee, and he radiates a lot of nervous energy. After rescuing him from the fire at the start of the issue (which was a pleasant surprise: there was no need for the comic to keep the character alive after Spider-Man finds his notebook which lists all the people who are being targeted) Peter walks around in a bit of a daze. That’s great news, because it means we can see who his current supporting cast of characters are whilst he wanders. Really intriguingly, half of them are related to Gwen Stacy.

Gwen and her dad are both dead by this point, but three new Stacys have taken their place: Jill, Arthur, and Paul. Jill seems to be both very friendly with Peter and very much romantically interested in him – although he doesn’t note it, being married to Mary Jane at this moment. Paul, on the other hand, hates Peter, and seems to be an academic rival of sorts. He also has a little goatee – I’ve checked and can confirm that Howard Mackie has one, so that could be where that comes from. The third Stacy is Arthur, who seems to have taken a mentor-type role for Peter. When Peter needs to work out what to do with his list, it’s Arthur he goes to see. Bringing in so many members of the family is SUCH a curious choice for Spider-Man at this point. It’s nice in that it adds so much more to Gwen Stacy in hindsight: she was treated as such a cipher whilst she was alive that seeing an extended family gives her at least a little more legacy than “she was the girlfriend who died”.

You’ll probably have noticed I don’t really have anything to say about this issue of Amazing Spider-Man. It was an entertaining issue, with good character work, really nice artwork, and twists I didn’t expect when they came round. As I read it I kept thinking “oh, THIS could be the angle for my essay” and then a page later was caught by something completely different. I thought this was going to be Tom DeFalco all over again, but it’s a decent comic which features a more mature and intelligent take on Spider-Man.

There’s something really refreshing about a Spider-Man comic which doesn’t feel rooted in the old-fashioned Stan and Steve magic: the characters seem to be independent-minded and there’s much less of that “gee whizz, shucks” attitude which came back in force when Dan Slott took over the character. This Peter Parker is a smart guy, but he’s wiry and reserved rather than corny. The supporting characters all seem to have realistic concerns, and Mary Jane gets her own subplot divorced from anything Peter is doing – somebody is stalking her – which she’s going to deal with herself. 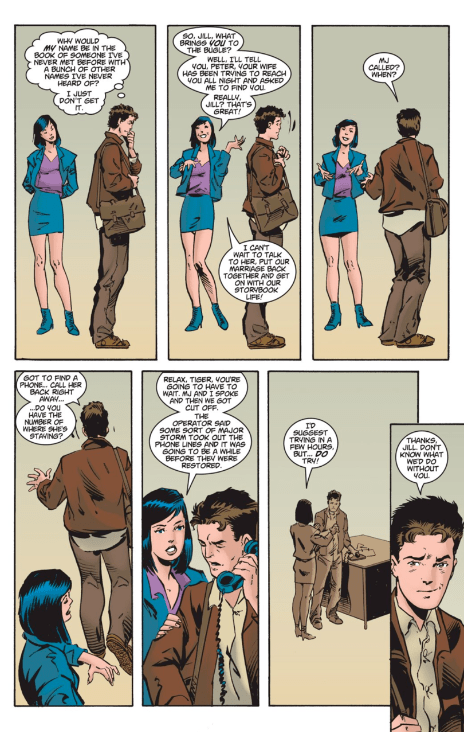 To emphasise this whole idea, Doc Ock shows up towards the end of the issue. It’s set up so we think he’s the villain behind the arson, but his ambush of Peter is immediately halted when somebody else grabs him and yanks him off-panel. All we see is his tentacles smash out through a wall, like rigor mortis has set in on them. That’s a startling thing, but it emphasises that this is a period of Amazing Spider-Man where the creative team are working on the past but pushing it away in favour of the present. That’s always been my favourite type of Spider-Man through the roulette: when it accepts the past as past, but that the present day is where we now need to move forward. Spider-Man exists on a wheel which spins round and round, and each time it completes a revolution the character resets back to where he was at the start. But it’s become really clear that Spider-Man is a character who would truly benefit from being able to escape the idea that time is a circle: the idea of a thirty, forty, fifty year old Spider-Man is so fascinating, and each time the character gets a new creative team they’re able to push him forward into something new.

Then he resets. And it’s a shame, but that’s the nature of comic books, I guess. Any run could have evolved and become a defining one, which heads forward in time and progresses beyond the standard origin story and two/three years of Spider-Man existing in the world. But that’s not the story which anybody seems willing or able to tell with the character, and so we head back into greatest-hits territory time and time again. Howard Mackie and John Byrne’s run with Spidey is not, to my knowledge, a “famous” one like Brand New Day or Dan Slott’s run. But it’d be so great to see elements of this come back! I want more time with the Stacy family, and Mary Jane as an independent figure who has her own adventures/problems. And god, would I like to see more Spider-Man comics coloured like Gregory Wright colours this one.

This is the last spin of the Spidey Roulette wheel for now – but how nice to end it with a good comic which made me feel inspired by the endless possibilities which are on offer for Peter Parker, the best character in comic book history. I’ve got a new Roulette Wheel which will start spinning soon…. but for now, farewell, Spider-Man roulette!