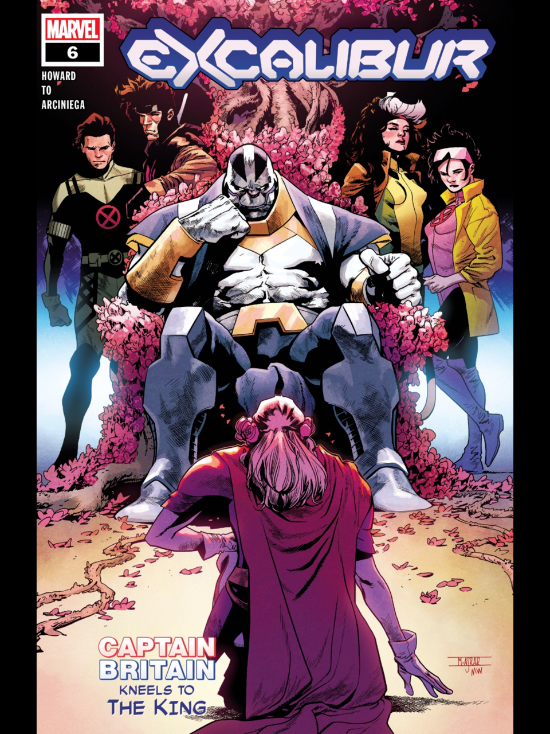 Apocalypse has been playing a careful game throughout Excalibur, which wasn’t the smartest thing to do when everybody around you is an unpredictable wild-card who can’t be second-guessed. Of course it’s great fun to have a long, drawn-out plan which slowly comes to fruition over a period of time, making you look like the smartest and greatest mutant ever. Of course that’s what Apocalypse would like to happen. But you don’t try something like that when you have flippin’ Psylocke, Rogue and Gambit on your team!! Smarten up, Poc!

Apocalypse does ultimately get what he wants in this sixth issue of the series, but it’s not because he’s played an intricate game of chess with everybody else: the rest of his squad not only override and overrule most of the planning he’s put in place during the course of this issue, but they also killed him last month. The only reason he actually ends up getting what he wants is because he has the brute force to push it into place despite the chaos around him. He shows up halfway through the final battle between Captain Britain and Morgan Le Fay and wanders off through the battlefield to go parley even though the fight is still going on at the time. All Betsy can do is shrug at his bravado and watch to see what happens.

His plan still works, even if the whole “get Rogue involved” business doesn’t get him anywhere and he has to resort to – I think – plan B. Tini Howard is very good at writing an Apocalypse who seems to mix circuitous planning with flying-by-the-seat-of-his-trousers luck, and it’s hard to tell where his plan ends and his improvisation begins. Yet on the surface of things, his great plan switches into an alternative path: one which puts Jamie Braddock on the throne in Otherworld. With Jamie in charge, it doesn’t matter that Betsy and Brian have a duel to the death: their brother can simply overwrite reality and bring the loser back to life. Apocalypse’s second approach at the throne yields results, mainly because he has the assertiveness to go for it. 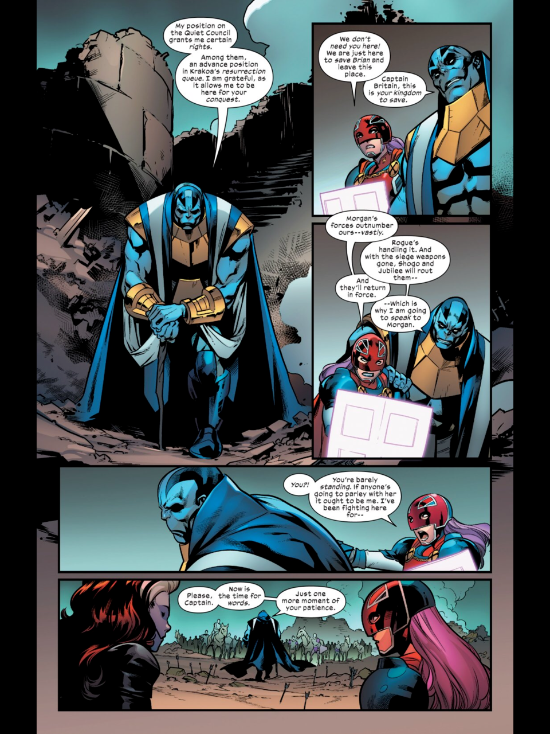 In turn, Betsy asserts her own brute-force power over Jamie by forcing him to bring their brother back to life. Being a reality-warper doesn’t do anything for you when your sister has one foot on your balls, after all. The series started off with an unsure and somewhat insecure Betsy Braddock, and has slowly started to turn her towards a more dynamic and self-minded person. At the end of this issue, when she reunites with her brother and finds out that he’s changed: to become captain Britain, you’re offered a choice between a sword or an amulet. The idea is that the true hero will choose the non-violent option – but for the first time ever, he chose the sword. Being a pawn of Morgan Le Fay changed him. Betsy sees the change, but doesn’t see it as a flaw.

Instead, she swaps out his sword with her amulet – each of them get what suits them most, and they can move onwards. Neither actually won the item they wield, but she has the assertiveness to realise that she’ll probably be able to find her path forwards anyway. She’s still nowhere near the level of self-assured that Apocalypse is, but she has her brother back, and the backing of the rest of her team. That’s a big step for a character who has spent the last decade as a lost and unsure vice-captain, right? Apocalypse’s plans are back on track by the end of the issue, but what he’s not paying attention to is how his team-mates are currently planning out their futures. He’s got the brute force to try and get his agenda seen to – but if Betsy can get the rest of her team on the same page, they’re powerful enough to stamp him out.