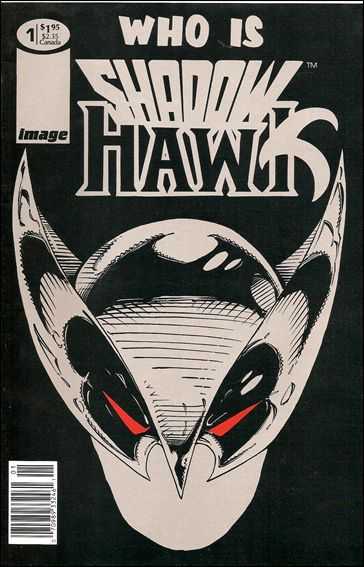 In the first issue of Shadowhawk (a comic that, more than any other Image debut, contains the visual legacy of the previous American-style independent publishing booms), the identity of its titular hero is unrevealed. Several characters are seen going about their troubled, uncostumed, argumentative lives while Shadowhawk looms over the narrative, breaking spines. 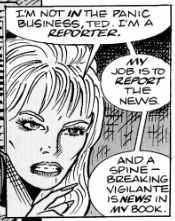 It’s not especially framed as a mystery, though in one scene one of the cops shows up late and sweaty with no explanation—much like one C Kent has often done. The narrative captions that accompany Shadowhawk’s appearances all discuss Shadowhawk in second person. “You” are sneaking about the city, “you” are breaking spines. This is enough of an answer to a barely-evoked question for me, and may have been for other readers: Shadowhawk is an experiment where the superhero is the reader insert, is the reader, almost a game book. It doesn’t matter to me which person is intended to be behind “my” mask and the text barely dares me to wonder. At the end of this first issue, the biggest question I have about the intended identity of Shadowhawk is: are they a feminist?

Unlike the other, this query is prompted by the text. Shadowhawk reiterates: Shadowhawk is taking back the night.

Take back the night is a feminist slogan in wide public use since the mid-seventies. Often the murder of Susan Speeth is identified as a wellspring: after she was killed, on her way home, women in their number held a candlelit vigil to “take back the night” from her killer specifically and his predatory peers in spirit. It’s a mission statement founded in the violence, sexual and otherwise, that women are made to widely fear and experience when walking alone at night—and the responses from authorities to women being killed while on the move at night: “don’t go out, then.” It’s a slogan of resistance and sorrow that has been expanded to envelop a wider swathe of the victimised but was founded in recognition of misogyny as a social ailment.

Shadowhawk #1 was released in 1992. Just for example, the Women’s Resource Centre was founded in 1991, marches were still being organised, and many thinkers were writing on Take Back the Night and its central subjects in 1992, as can be seen in the citations on this thesis. Take back the night had not become an irrelevant phrase to public feminism; it had become a phrase, in itself, as a result of public feminism. What was the purpose of affording this catchphrase to Shadowhawk? Surely, it must be in reflection of that same community-minded feminism.

The first victim Shadowhawk protects is… well, it’s Shadowhawk, but disguised as an old, homeless man. Several assailants begin to bother this apparently easy prey for “some fun” and are fully walloped for their trouble. They did not threaten sexual violence, they did not threaten gendered violence. On the other hand, to fully disassemble, they approached someone they perceived to be socially weakened at night with the intent to self-gratify. It’s not contrary to feminism to protect the disenfranchised, but “maiming people who are willing to terrorise old men” is unlikely to be credited as an ideal of feminism specifically. Or is it? Let’s be generous. Feminisms: 0.5

The second victim Shadowhawk protects is an old lady who is attacking a small collection of younger men she has taken for drug dealers. The man she has hit across the face with her umbrella tells her she’s going to “die for that,” which is undeniably alarming from a stranger, and Shadowhawk strikes “without mercy” – which we can assume to mean he breaks all of their spines. This is technically allowing women to do whatever they want on the street at night, but, again, it’s not the core of the message as smacking guys across the face with umbrellas because you have prejudices is not, unless I have missed a memo, the feminist dream. Maybe I have. Feminisms: 0.75 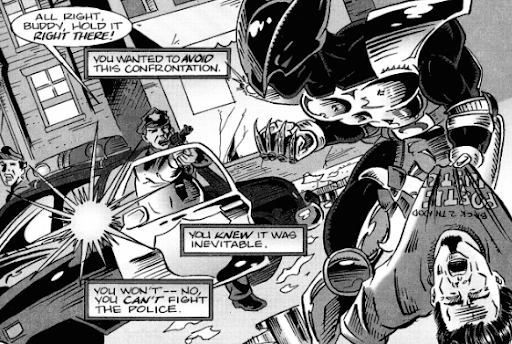 Next Shadowhawk has a fight with some policemen who would like to shoot him (they take Shadowhawk for a him – which in later issues, he does turn out to be). Shadowhawk “won’t—no, can’t” fight police. Shadowhawk knocks their guns out of their hands and runs away. I’m not sure this can be fully evaluated via the lens of “general feminism.” Feminisms: 0

The last thing Shadowhawk does in Shadowhawk #1 is spy on a reporter being lesbian-seduced by the owner of her paper who, I think, has two or more further evil identities. Shadowhawk thinks about people getting “raped. Or worse,” and reiterates that they (you) are TAKING BACK THE NIGHT!! I don’t know if inspiring ponderance on the matter of what might be worse than rape is “very feminist.” Shadowhawk has also not stopped any rapes. Feminisms: 0

Frankly I’m not sure if it plays. “General feminism” is a false construct but real feminism has to include the perspective of black women and the safety of black people as a whole. How does this comic present black people to the reader? There’s a lot of black delinquency in this comic, with only the classic “and the police boss is also black!” trope to make it “okay.” The first three spines Shadowhawk breaks, the set where he baited the trap and threw the first punch, were all black, with dialogue I don’t feel entirely carefree about from a white writer.

There are two more black characters later, both men, talking about how one is a drug-addled criminal and the other used to be the DA but “gave up because ‘a’ the man,” which is the kind of thing that, again, just doesn’t feel like it’s coming from someone who’s in it. The ex-DA turns out to be Shadowhawk, later, but he’s not here. He’s just a guy whose only purpose on the page is to be one half of a dialogue about cheap street hustlers and their expensive-to-fill pipes. The police are treated only with sympathy, scruffily humanised. Feminisms: 0 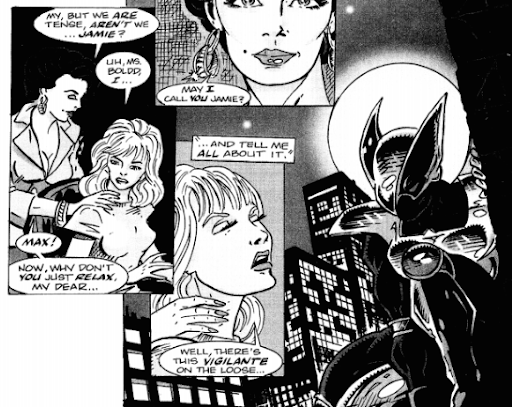 In opposition to the handfuls of men, only two women (both white) are presented like returning characters. One appears to be Good and one appears to be Bad. They’re both professionals, in a very we-just-had-the eighties style: on the left, the plucky, thwarted reporter (long hair; blonde), whose grizzled bossman is keeping her down; on the right the ball-breakin’ lez (short hair; dark) who wears only a bra under her bitch suit. Great earrings, I must say. It’s all very regular, not really advancing the cause to any degree. Unless your cause is wanting to see a mean lady give a determined one a non-consensual massage? It seems like Shadowhawk’s is. Feminisms: 0.1

All in all, SHADOWHAWK #1 can be awarded 1.35 feminisms. I’m not entirely sure for whom Shadowhawk is taking the night, or if Shadowhawk has correctly identified from whom it should be took.

This panel split makes a mess of the reading order: 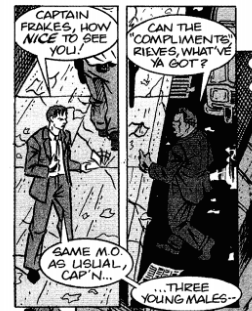 Like all other Image starters, this book relies on its readership being Marvelites (cue reference to “the Bugle”) and familiar, to the back teeth, with superhero motif: 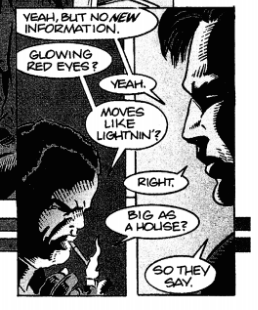 Contains quite a bad drawing of a dog:

Claire Napier is a writer and editor, and has been published by The Guardian, ComicsAlliance, and of course at WomenWriteAboutComics, for which she served as Editor in Chief for several years. You can find her on Twitter here, you can find her website here, and you can buy her comic Dash Dearborne here!