Welcome to Spider-Man Roulette! Shelfdust’s Patreon backers were asked to pick a number at random – and now I’m going to write about whichever corresponding issue of “Amazing Spider-Man” they chose! This issue was picked by Patreon backer Matt Lune, who chose number 327 for the roulette! 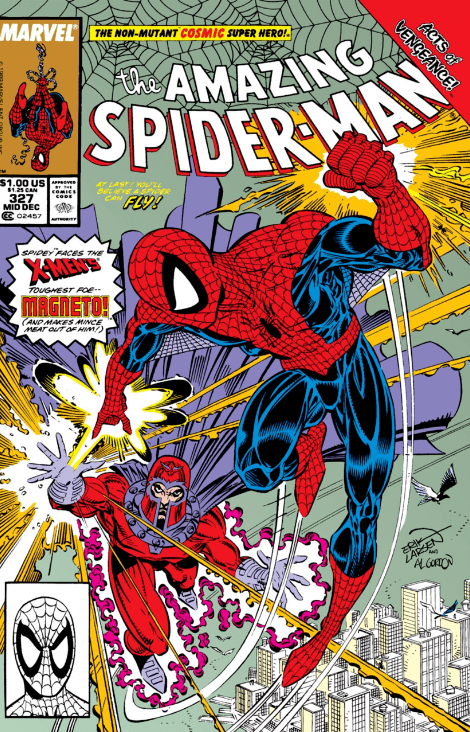 It’s hard not to yell that out, it’s such a fun phrase. It’s also the branding given to a period of time where Marvel switched all their villains round for a bit. The thinking was that all the heroes had gotten used to fighting the same old people time and time again, so surprising them with villains who weren’t “theirs” would get them all off the game and maybe lead the villains to a few surprise victories. In Spider-Man’s case, it was decided that Magneto would head over to Queens to see how strong the Web-Head really was.

Having the cover say that Spider-Man was going to win was probably not a smart move in that regard, but still.

Magneto is a higher kind of villain than most other Marvel villains. Spider-Man’s used to dealing with foes who can think really hard, or have wings, or… are made of sand. He’s not got much experience in facing up against intelligent, multi-faceted enemies who can think on the spot and don’t rely on continually spamming the same power move in order to try and win. Magneto constantly re-evaluates himself during a fight, and rarely has a single goal in mind for anything he does – it’s why he was ultimately able to be moved across into the X-Men. Although he approaches a situation differently to Xavier’s lot, he’s still a man of reasonable reason, rather than a guy who puts on a Rhino costume and charges at walls. After a career spent fighting villains like Green Goblin or Doc Ock, who fall into routine, it’s a clever choice to set Spider-Man up against Magneto during Acts of Vengeance.

Ahem. In this issue, Magneto immediately shows himself as being different to the other villains – which helps the branding, hurray – by not really being interested in defeating Spider-Man. Instead, he thinks that Spidey might be a mutant, and as a result could be a possible recruit to his personal cause. Michelinie makes this clear right from the start, as we see Magneto float through Central Park and carefully consider what he’s going to do. His thought process is made clear in a way we’ve seen before in X-Men comics – but very rarely in Amazing Spider-Man. Aside from Doc Ock, most of the enemies in this comic book tend to say their thoughts out loud during battle, but their planning process is never shown to the readers. We see the outcome of their plots, but we don’t see them considering how they’re going to take on Spider-Man or why. Magneto, though, is a better class of villain.

Erik Larsen has a huge amount of fun with him, as well, wrapping his cape through the air in distinctive, iconic fashion. As he float through New York he does so with a sense of dignity and poise: one thing I’ve always noted about the character is how he doesn’t actually fly through the air in the way Superman does, headfirst like a plane. Instead he glides vertically when he moves, looking his enemies in the eye and showing his full profile to anybody who looks up for him. Larsen embraces this idea of Magneto as a spectacle, on one page stripping the story into five thin vertical panels which show Magneto landing in Central Park neatly and squarely. It gives a feeling of control over the character, and a regulated neatness to how he uses his powers and the consideration he gives every move.

By contrast, at this point in time Spider-Man has a bunch of new powers which don’t really make much sense and aren’t of huge benefit to the series. It’s a bit stupid really, and extremely messily presented by the creative team. Whereas Magneto is shown to be a man of control, Spider-Man comes across as a wild, confused scientist experimenting with different variables to see what results he’ll get out of them. It’s purposefully stupid. he can already climb up walls, punch through walls and web-swing through New York – he doesn’t really need to have energy bolts added onto that list of abilities.

And yet here we are, and Spidey is just as confused by the powers as I am, so he heads over to the docks to test them out on a bunch of wrecked cars. That draws Magneto’s attention, as he similarly decides to see just what kind of powers Spider-Man is actually working with right now.

Magneto’s attack on Spider-Man is very clearly designed to be a test – a Danger Room training system – and he quickly realises that Spider-Man has a bunch of random powers with no real connection to one another. Rather than having a single power which springs from a singular mutation in his body, Spider-Man is currently in the midst of a mid-90s mix of ridiculous abilities which don’t fit and aren’t natural. Magneto realises that Spider-Man is in a very strange place right now, and he’s not a mutant – so he flies off before the end of the issue, uninterested in following a typical fight scene through to its inevitable conclusion.

Spider-Man doesn’t really get much out of this issue, other than some sweet action panels from Larsen. Magneto, on the other hand, gets a real boost as a result of the story. He comes across as smart, driven, and motivated. By giving us the focus on a villain rather than the hero, we get to see “a day in the life of” Magneto as the issue progresses, and it makes him feel far more real and honest of a character than, say, Electro might have been at the same time. That’s what the real benefit of Acts of Vengeance was: it was meant to refresh the heroes by switching up the way they defend themselves from villains, but instead it gave the villains a breath of fresh air.