We’ve been covering the new era of X-Men on Shelfdust over the last few months, but on a time-delay from the actual issues being released. With the start of a new 22-part crossover story called “X Of Swords”, though, we thought… well, what a great chance to really screw up our own internal timeline, eh? And so we’ve gone Swords-A-Go-Go, and we’ll see if we can get through all 22 issues together. If nothing else, at least we’ll try to make some good… points.

Nextwave had an unrestrained and unhinged energy to it, whichon the surface seemed like it came from the kinetic characters like Boom Boom or Machine Man… but, actually it actually stemmed from Monica Rambeau. More specifically, her inability to care about the completely crazy things that her team got up to. Hellions gallops forwards with a similar energy, and it’s also because the “sensible” characters don’t appear to have any interest in putting a tether onto their more manic teammates. With their leader Mr Sinister taken over completely by the madcap pantomime villain that Kieron Gillen and Jonathan Hickman gleefully reinterpreted him as, and Psylocke/Havok uninterested in stopping him, that leaves the Hellions as a completely unpredictable force of nature.

Which also makes it an excellent choice to have them play the dark-horse role in this big crossover. In this week’s next part of the crossover, their mission is to cheat – to steal some swords so the X-Men will win this contest of swords by default. They sneak off into Otherworld to lie, cheat and steal their way into the enemy camp, where they’ll cause some chaos. It’s another tie-in miniseries, in other words, but because it’s marketed as being part of the central story (you MUST buy all twenty-two issues, true believer!) it gets promoted up into the main narrative.

That would typically seem to give the issue more weight – but the creative team have little-to-no interest in taking up that opportunity at this point. Instead, the key of this issue is how weightless it is. As readers, we’re repeatedly told that this doesn’t technically matter, and the Hellions probably won’t achieve anything. Everything is silly nonsense and you can’t predict or plan for anything when you have Orphan-Maker and Nanny on your squad. But this is the smartest thing about the series, and especially the way it’s tied into this mega crossover event: the tension comes from wondering… what if they do achieve something?

Let’s come back to that in a little bit.

When you give people a miracle, they’re wowed by it for a few days – and then they’ll get used to it. We could invent teleportation tomorrow and by the end of the week people will be yawning and complaining that the queues are too long. One brilliant part of Hellions is how the mutants aren’t still in awe of the amazing things around them. Empath is resurrected at the start and blows straight through Xavier’s grandiose “what is your name” ceremony because he can’t be bothered with it. It’s a really funny moment – and who would ever have thought Empath would get one of those ever again? – but it also feels honest and earned.

I’m not going to give you the 1000+ exploration of Empath that I’m sure you’ve all been dreaming of all your lives, but instead I’m going to jump across to Havok and Psylocke, who are probably the closest definition of straight men you’ll get in the book. Comedically speaking, anyway. They are the two characters on the team you’d least expect to be a wild card, and the ones who’ll play closest to “the book”. And in this issue they completely shirk that duty. Things start out ridiculous and get worse, and they just stroll along, eyes permanently rolled, but giving no impression that they’re going to do anything about it. It’s a bit like the Democrats when they’re asked to actually do anything. I imagine Havok is roasting Empath on Twitter, but he’s not willing to step in face-to-face and do anything about anything. 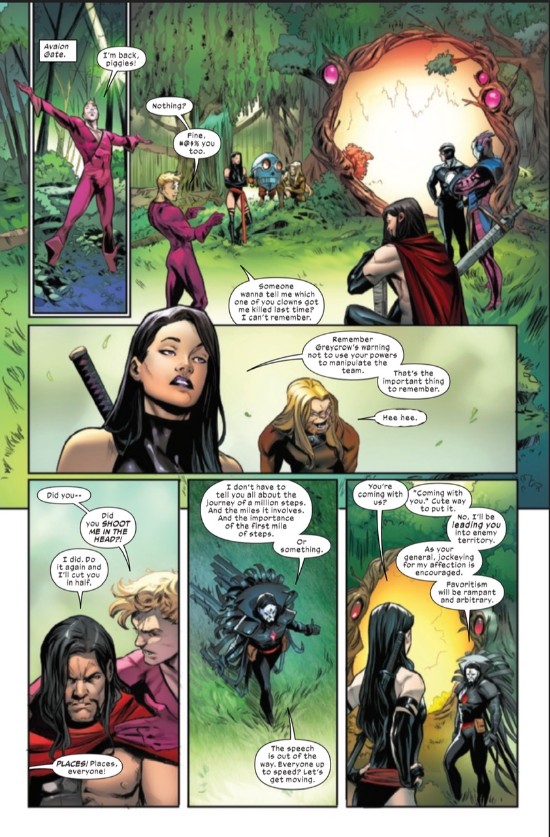 You need that from somebody in order for the rest of the comic to work, though. If everything were comedic and wild, nothing would be, and it’s the grounding from Havok and Psylocke which allows Empath’s villainy to spring forth in unexpected new ways. By the end of the issue he’s persuaded Sinister to let him mind-control Grey Crow, which by all accounts is a completely evil act – and one we both could see coming and couldn’t have ever predicted. It’s the issue in microcosm: whilst we’re busy being entertained by Empath’s lack of mortality and the way he disrespects the wonderful Krakoan miracles he’s been offered as a mutant, we forgot to pay attention to… y’know, his lack of morality.

Which again leads us to the question – we’ve seen so much evidence that the Hellions will never achieve what they’re setting out to achieve.