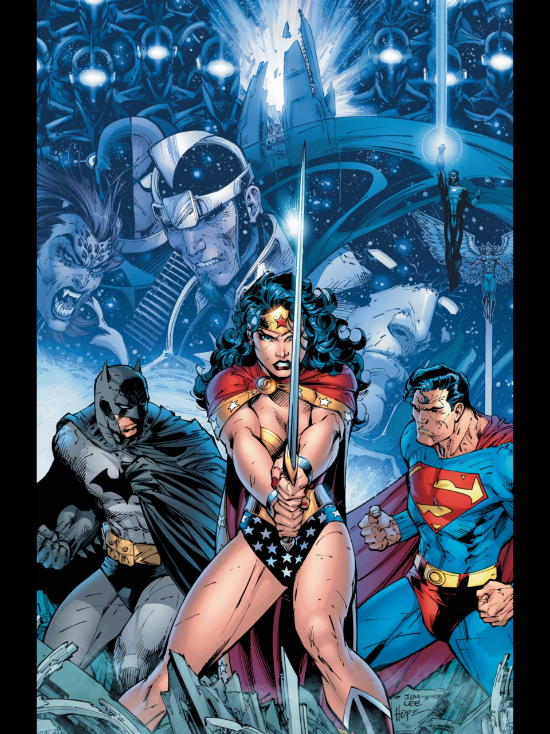 You’re reading The Complete Infinite Crisis, a Comprehensive and Encyclopedic look through the universe-changing superhero event published by DC from 2005 to 2006. Shelfdust are proud to provide a complete overview of the story, and everything that happens in it. Just as we were really starting to explore the story, however, we’ve had to ask for a bit of help about the first issue from an expert in the area.

When we last left off, we were pretty caught up with everything that’s been going on. Batman had a satellite, and it got hacked and that upset Superman. Oh! Actually, that raises a good question – who was it that hacked Batman’s Brother Eye satellite? Let’s get Graeme McMillan back in, he’ll be able to shed some light on this!

How did the other superheroes take it when they found out that Batman had been spying on them – and that he’d been hacked?? That can’t have been good!

Graeme McMillan: They were thrilled, obviously.

Oddly enough, readers weren’t treated to a proper reckoning between Batman and the other heroes — the events of the OMAC Project miniseries were so fast-moving, that all we really got was a couple of Green Lanterns being a bit miffed, and that was about it. But there are a couple of mitigating factors that we need to factor into this whole thing.

Firstly, the superheroes kind of already knew Batman had been spying on them. That was the central concept behind a JLA storyline from years earlier, called “Towel of Babel,” where Batman’s contingency plans on how to take down each hero were stolen by Ra’s Al Ghul, the old bastard. So it shouldn’t have been too much of a surprise that Batman was still sneakily filling up virtual notebooks with even more plans and schemes on how to screw with his supposed partners in crimefighting.

Perhaps more pressingly, at this point in DC continuity, Batman was very firmly on the outs with the rest of the superhero community as a result of the one-two punch of Identity Crisis and another JLA storyline, “Crisis of Conscience,” which revealed to the reader — and then, eventually, to Batman himself, that Zatanna had mindwiped a group of supervillains years earlier, and later did the same to Batman himself… something that he wasn’t in favor of, unsurprisingly. There’s a certain irony to be found here, in that this reveal demonstrated that Batman wasn’t actually being that paranoid in the first place; he probably did need some kind of plan to stop the other heroes from wiping his mind again in the future. Right again, old chum.

Anyway, to answer your question: We didn’t really get to see how the other heroes reacted, but given the circumstances, it’s fair to say that the Dark Knight probably wouldn’t have been too receptive to their concerns no matter what.

Crisis of Conscience… Identity Crisis…. this all sounds pretty important to what’s going on in Infinite Crisis, right? Graeme, thank you so much – but I’ve got some more stories to learn about!!