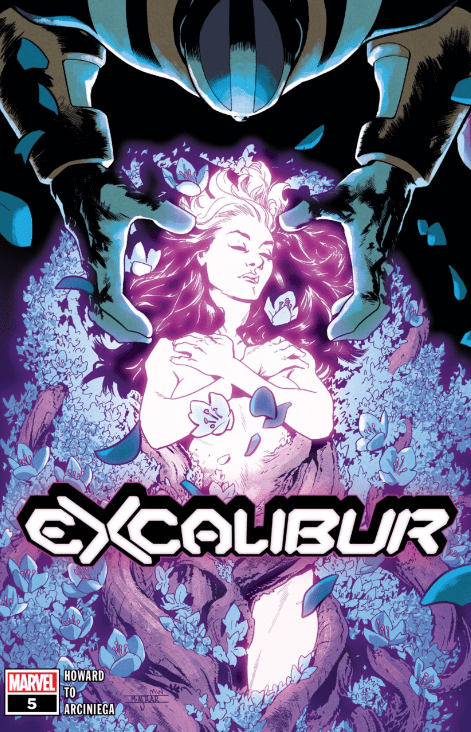 I know, I know, its… wife in a coma. I don’t know many Smiths songs so whatever, maaaan.

Five issues in, and how are things going with Excalibur? Their last foray into Otherworld ended up ripping holes in the fabric of reality, which has led a bunch of giant monsters onto British soil. What are the chances Boris has already hidden himself inside a fridge again?

This is the issue where the varying plot threads of Excalibur start to form a recognisable pattern, and their ultimate image begins to take form. Gambit and Apocalypse’s rivalry over Rogue results in the former organising a “brain heist” and sneaking in a ringer to wake up his wife early, without Apocalypse knowing a thing about it. Rachel Summers – in the form of that golden dog we’ve seen intermittently through the last few issues – gets Rogue to go on a vision quest which eventually wakes her up before Apocalypse can see his plan through to its fruition. It’s a clever way to bring in a classic Excalibur member, but it also gives Gambit a little more interest as the series goes on. He’s spent a lot of time being snippy without ever being incisive, and so here his tendency for thievery pays off some stronger dividends than previous issues suggested could be possible.

Elsewhere, Betsy sends the issue flirting with Pete Wisdom, the only single male in the cast who isn’t related to her, gay, or Apocalypse. So there’s some business as usual there, even if it is a cringe way to see the character spend her time. It’s neat to see that she sides with Apocalypse when push comes to shove, but that’s no really a dominating part of the plot by that point – she’s no longer the leader, as Gambit, Apocalypse and Rogue all assert themselves without her input, and go about doing whatever they want to do without asking for permission. As before, Betsy’s inability to lead makes her the most interesting leader for this series.

For Rogue’s part, her vision quest doesn’t rouse up anything of particular notice, to be honest. There are some familiar bits of X-Men imagery arranged into vaguely mystical patterns, but nothing here seems to really stand out. That might be the fault of the artwork, which doesn’t seem to know what lasting images it’s meant to be leaving for the reader. Although the art looks great, there’s a tendency for the thematic parts of the narrative to get lost in favour of straightforward storytelling, and it’s hard to know what we’re meant to pay attention to as Rogue wanders her astral plane, looking at rock formations and mystical thrones.

Rogue is blasted with Apocalypse energy which hovers around her stomach, looking worryingly like a pregnancy storyline might be on its way for the Southern Belle. She takes a sword from a statue of Apocalypse and stabs herself straight through the energy and straight through her stomach, which helps her take another step out of her magical coma. What… is this meant to be?

The narrative captions showing Rogue’s thought process seem to suggest that Apocalypse is going to wake her up only when it suits his plans and makes him look like the hero. So she takes a sword – from an Apocalypse statue – and stabs herself to release herself from that hold. Why does she take the sword from Apocalypse? Surely he should be seen to be withholding the sword – shouldn’t she take a sword from Rachel instead, smuggled into the astral plane? Or could Rachel steal it from Apocalypse? The imagery doesn’t seem to have internal logic.

Dream sequences don’t have to make sense, of course, but this seems more like a case of narrative inconsistency than deliberate misdirection and weirdness. It’s not clear what we’re meant to take from the page, and neither the artwork nor the scripted dialogue seem to be saying the same thing. We’ll instead have to wait and see if any of this is reflected in later issues, or if this is just a diversion from whatever is coming next? Doesn’t seem like the right thing for someone to take away from a fantasy series which places so much importance in prophecy and prediction.