You’re reading The Complete Infinite Crisis, a Comprehensive and Encyclopedic look through the universe-changing superhero event published by DC from 2005 to 2006. Shelfdust are proud to provide a complete overview of the story, and everything that happens in it. Just as we were really starting to explore the story, however, we’ve had to ask for a bit of help about the first issue from some experts in the area.

When we last left off, we were pretty caught up with everything that’s been going on. Batman had a satellite, and it got hacked and that upset Superman. Oh! Actually, that raises a good question – who was it that hacked Batman’s Brother Eye satellite? I bet The Hollywood Reporter’s Graeme McMillan will be able to shed some light on this! 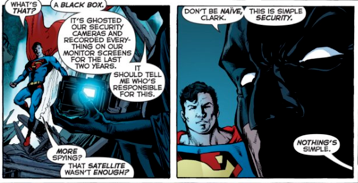 Who was the original Maxwell Lord?

As originally created for the late-80s Justice League (AKA, Justice League International) series, Maxwell Lord was a pretty shady businessman, head of a company called “Innovative Concepts,” who’d secretly made a deal with an evil super robot called The Construct — later, oddly, retconned into an entirely different evil super robot called the Kilg%re for reasons I don’t fully understand, because it doesn’t really change anything — to gain money, power and women, because it was the ‘80s.

Part of this deal, it turned out, involved Max manipulating all manner of people to set up the version of the Justice League that had Blue Beetle and Booster Gold and other people that smiled, only to realize that, hey! Maybe creating a superteam that was explicitly intended to help an evil super robot achieve world domination — the robot in question was not shy about admitting that was its goal, no matter which evil super robot it turned out to be — was a bad idea. He turned on the robot, seemingly destroying it, and saved the day. As a result, the Martian Manhunter scanned Max’s mind, found that he wasn’t that bad really, and let him stay in charge of the team.

Max ended up sticking around as an occasionally greedy, but mostly trustworthy — and, let’s not forget, so inherently good that the Martian Manhunter couldn’t find malicious intent when he read his mind — part of the Justice League for a few years. He even got super powers after the 1989 crossover series Invasion!, where he gained the ability to influence people telepathically, with only a mild nosebleed to show he’d done it. That would be potentially creepy, if there wasn’t for the fact that readers were shown on more than one occasion that he wouldn’t misuse the power because he’s such a good guy.

And then there’s the Maxwell Lord that shot Blue Beetle in the head after Beetle discovered that Max had orchestrated a stealth takeover of a super-secret spy agency called Checkmate, all because he so much that he wanted to eradicate them entirely from the face of the Earth.

That version of the character — who, obviously, lacked the warmth, the humor, and the morality of the earlier Maxwell Lord — was the one that showed up in the run-up to Infinite Crisis. It turned out that, not only had he taken over Checkmate, he’d also hacked and taken control of Brother Eye, retrofitting OMACs into it, because who wouldn’t want their own army of mind-controlled cyborg sleeper agents, given the opportunity, and his power to suggest things to people had grown to the point where he was able to outright brainwash people, including Superman, whom he used as a targeted assassin during the “Sacrifice” storyline that ran through the various Superman comics for a month, as well as that month’s issue of Wonder Woman.

“Sacrifice” is also the reason why Max doesn’t actually show up in Infinite Crisis proper; Wonder Woman decides that, because this new Max is such a threat that he can brainwash Superman and turn anyone else into a sleeper agent with the metaphorical flick of a switch, she needed to kill him… which she did, unaware that her murder was being broadcast around the world by Brother Eye, acting as a traditional satellite for once.

How do these two Maxwell Lords co-exist? Look, cognitive dissonance is a trait necessary for reading superhero comics, Steve. As Kirby once famously put it, “Don’t ask! Just buy it!”

Thanks Graeme! We’ve already found out what happens to Maxwell Lord so this rounds out the circle there. This all seems to come back round to Countdown to Infinite Crisis, which Steve Lacey laid out for us earlier. Caitlin explained Brother Eye – so that just leaves OMAC to deal with…

One thought on “Infinite Crisis with Graeme McMillan: There’s more than one Maxwell Lord?”