We’ve been covering the new era of X-Men on Shelfdust over the last few months, but on a time-delay from the actual issues being released. With the start of a new 22-part crossover story called “X Of Swords”, though, we thought… well, what a great chance to really screw up our own internal timeline, eh? And so we’ve gone Swords-A-Go-Go, and we’ll see if we can get through all 22 issues together. If nothing else, at least we’ll try to make some good… points. 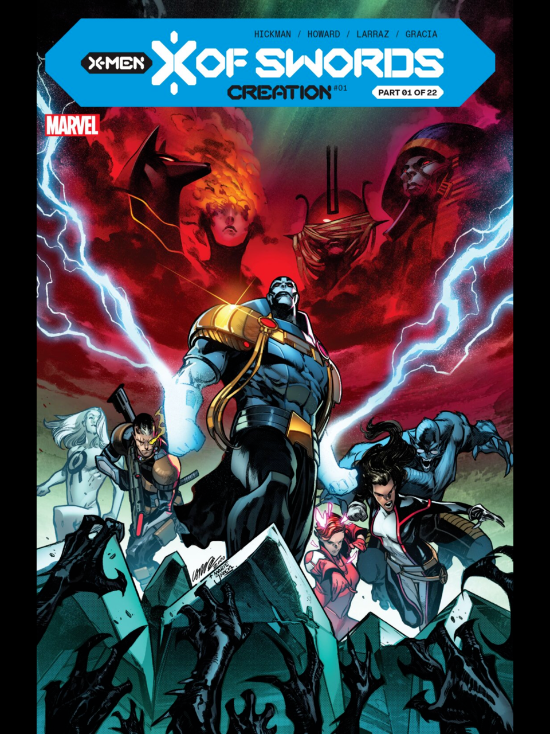 X of Swords: Creation is the opening issue, written by Jonathan Hickman and Tini Howard with Pepe Larraz, Marte Gracia and Clayton Cowles as the artistic team – a bridge from House of X/Powers of X, sure, but otherwise this feels like a firm step away from those first issues of the Krakoan era and onto something more idiosyncratic. For one thing, Howard brings a huge amount of voice as the co-writer here, her style used to shatter against Hickman’s slow-burn plotting approach. There’s still a lot of careful faction-building and scenes where characters vie for the upper hand against one another, but it’s matched by an interest in the occult and a sparkier sense of dialogue which feels more in-line with what Howard has been bringing to Excalibur so far.

That’s most clear in the use of Tarot throughout the issue, which mirrors the cards we saw previously in HoXPoX. Here, though, we don’t see the cards simply as static images like before – they’re evolving and unpredictable signs of the possible, and they actually get given an in-text interpretation. Twice, in fact! Because wouldn’t you know? There just so happens to be a character called Tarot who has this as her mutant power – and, wonderfully, the comic brings her in.

It’s a neat reminder that there’s a very deep bench for the writers to rely on. I don’t care at all about Tarot as a concept, but what a brilliant reason to bring in Tarot the character, eh? She probably hasn’t spoken for almost a decade or so in comics, and here she gets a page just to herself – a data page, sure, but still a page. There are so many characters out there who can be connected to things in so many different ways, and it’s one of the greater joys of this Krakoan era: everybody gets to show up.

Another character who gets the dust brushed off their shoulders this issue is Opal Luna Saturnyne, the lady who runs the Starlight Citadel. That’s the big floating palace which sits high above Otherworld, I think, and her tactic during the recent wars in Excalibur has been to shut all the doors and pretend nothing is going on below her. She’s definitely in some kind of threat, but her response is to issue a challenge for the X-Men and then go back to her bedroom. I’m not wholly sure what’s going on, but it seems like there’s an Otherworld Civil War brewing, and the X-Men will be standing at one side whilst Apocalypse’s kids stand on the other. Basically, that’s what’s happening here. Focus on that.

This is a comic which benefits from you having played a bunch of Risk when you were a kid, because there are maps and territories and it’s all pretty confusing to follow, to be honest. Basically the villains are trying to conquer the dimension-next-door to Krakoa, so that’s the big threat here, but there are about ten other dimensions all next to each other, explained through a diagram and… well, I dunno. I’m probably going to whistle through some of the plott…ier bits of this and focus mainly on the characters and how they’re reacting to everything.

One thing I really enjoyed about the issue was that the X-Men spend a lot of time at each other’s throats, which shows how the comics have stepped up from the happy fantasy of HoXPoX. The Quiet Council bicker amongst each other just as they always have, but the more active ground-team also get into it on more than one occasion. Apocalypse and Rictor both take seemingly mortal wounds as they’re betrayed in Otherworld, and Rockslide dies too, sliced in half by Summoner’s new weapon: it’s a hard rock knife.

The Quiet Council has been the most successful part of on-island life to date. Marauders has given us Hellfire Bay, sure, and there’s a bar and hot tub in that forest somewhere – but it’s the Quiet Council which has taken on an iconic status within this current time for the mutants. The scene here is a highlight not just because it shows the mutants at their most intriguingly divided – but because it shows Krakoa overruling them. We’ve not seen that before, as far as I’m aware, and it’s from that point onwards that the crossover is able to throw readers offguard. There’s a distinct sense of “that’s not supposed to happen!” and it means that everything which follows is at the mercy of the cards – this is new territory for everybody involved. That’s a really interesting state of affairs, one year in. 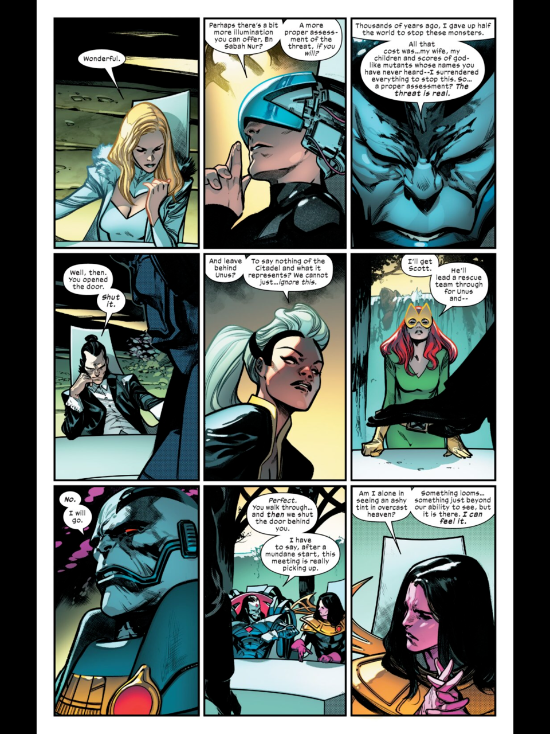 That leads us to Apocalypse being betrayed – something else which changes the game – but also to Rachel Summers prying into the mind of Banshee, who has been taken out by the villains in Otherworld. And then to Cable, Jean and Cyclops heading off on their own mini-quest. That initial decision by Krakoa to do the “wrong” thing leads so many other character down unexpected paths – a series of dominoes which fall one on top of another. And most importantly, it takes the story from the hands of Xavier, Magneto and the other characters you might expect to headline a big X-Men crossover…. and hands it over to Monet, Polaris, and Rachel Summers.

That’s what Krakoa was for, after all, right? Getting us a starring role for Polaris? Finally!

One thought on “Swords-A-Go-Go: X Of Swords – Creation”