Welcome to Spider-Man Roulette! Shelfdust’s Patreon backers were asked to pick a number at random – and now I’m going to write about whichever corresponding issue of “Amazing Spider-Man” they chose! This issue was picked by Patreon backer Josh Hendrix, who chose number 691 for the roulette! 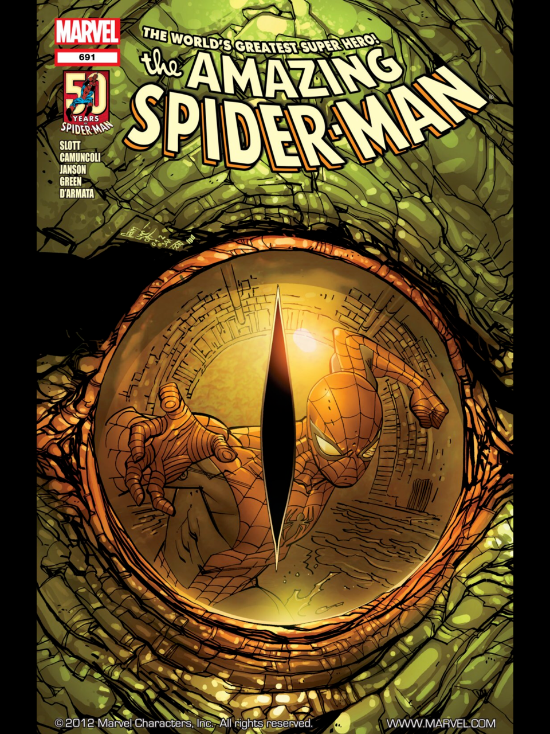 Issue #691 of Amazing Spider-Man came out in 2012, which was the same year Sony rebooted their Spider-Man film franchise with Andrew Garfield playing the title role. The film not only started everything fresh, but switched up villains, bringing in The Lizard as the main antagonist for Spidey to face down. And as the movies decree, so the comics shall follow – once it was clear that Lizard was going to show up in the movies, it became inevitable that he’d show his scaly face once more in the comics. Hence “Human Nature”, a new story where Curt Connors once again turns into the Lizard… albeit one who has been cannily redesigned to look a lot more like the one from the film.

Marvel Comics have always stepped one pace behind Marvel Studios: finding convoluted ways to replace the original Nick Fury with one who looks like Samuel L. Jackson; revealing that Scarlet Witch and Quicksilver aren’t the mutant children of Magneto; trying to make the Inhumans into a thing. Deciding to follow the lead of the movies for their new Lizard arc isn’t a real surprise, but it’s fun to see just how different the settings for each story are. The movies reset to go right back to the death of Uncle Ben and the origins of Peter Parker, as movies tend to do. By contrast, the comic book version of Peter Parker is a very experienced hero who has seen off Morbius, Doctor Octopus and the Spider-Slayer in recent issues. He has a full time job as a hero, a girlfriend who is neither Mary-Jane Watson or Gwen Stacy; and is a respected and known figure in New York.

More than that: Curt Connors is different to the one in the movies, even if he’s been made to look aesthetically similar. This is a Curt Connors who has been through some stuff, including the death of his wife and… uh… the time he ate his son, as part of the Zeb Wells/Chris Bachalo “Shed” storyline which got pretty dark. It’s that darkness which forms the pivot for this issue, which tries to give us the idea that the Lizard persona was never the problem: it was always Connors. The narration hits us hard over the head with the suggestion that lizards are not naturally an enemy to humans, meaning the villainous impulses of the Lizard’s evolved form actually comes from Connors instead. 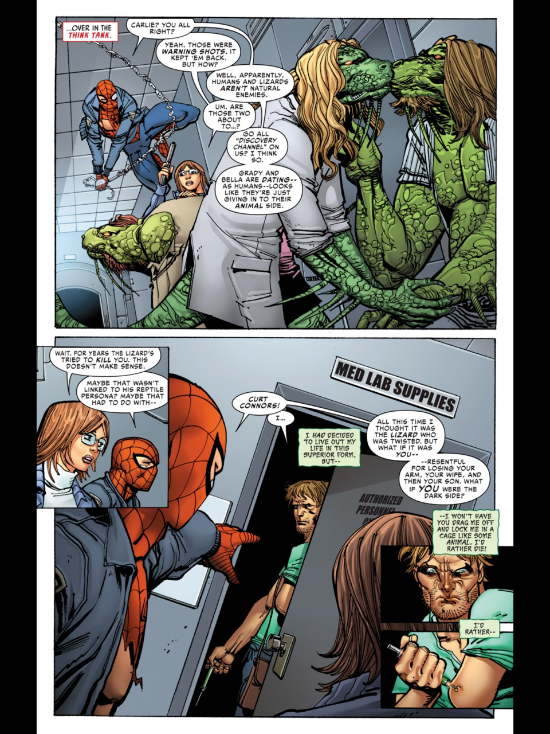 The execution of that concept is pretty poor, however. The Connors presented in this issue (and just this issue alone: as ever, I’ve jumped into a comic blind to what happened in the previous issue) comes across as angry, bitter, and villainous – in keeping with the idea that his darkness is the true motivation for the lizard being evil. Peter’s co-workers at Horizon Labs are turned into lizards, but they’re docile – affectionate. They’ve no interest in going on a murderous rampage, which emphasises how Curt is the problem here. Curt injects himself with the lizard formula again and it leads to a fight in the street, where every other panel Lizard tries to snap at an innocent bystander. It’s made very clear that Curt is the real villain here, and the Lizard form is just a shield he uses to hide that truth from people like Spider-Man.

But during the fight we see that Lizard hallucinates his dead family everywhere he looks, which prevents him from killing civilians. Each time he strikes, he pauses because he sees his wife or his son. Then he look at Peter Parker… and sees the face of Curt Connors. It confuses the message of the comic – is Curt meant to be the true villain or is he meant to be the lost voice of reason within the Lizard? He gets a hypodermic needle to the brain for his troubles, but tells Peter that it didn’t work – the “cure” Peter used hasn’t changed him back into a human.

The problem with that is that the end of his story reveals that it did work – that Curt Connors’ mind is active within the body of the Lizard. This is shown to be a troubling situation, a morally grey ending for the story which sees Connors living in the Lizard’s body as some form of punishment for the character. But the comic just told us that Connors is the problem and the Lizard itself is just a form of protective armour for him. So what are we being told here? Surely this is the most worrying finale of all: Connors has complete control of his mind and his body at the same time, which would presumably grant him more autonomy than ever before, but the comic presents this as some kind of karmic punishment. It’s a very confused message, and suggests that there really wasn’t an understanding of what this story was meant to be.

The whole situation also sees Spider-Man in a particularly dark place himself: he shoves a hypodermic needle into Lizard’s brain without knowing it if might kill the creature. When he finds out that Lizard survived and is locked up in prison, he then walks away without a word – and also ignores the pleas of Morbius, another morally-compromised character who asks if one of the women he hurt survived the experience. Spider-Man comes off really badly here. That’s meant to be building off “Shed”, where some really bad things happened and Lizard was positioned as being one of the darkest and more upsetting villains that the hero had in his gallery, but the events of this storyline don’t seem to be remotely as dark or scary – the other lizard creatures are played for laughs, and ultimately Lizard isn’t a threat to anyone because his psychosis stops him from killing passers-by. So why is Peter so shaken up and ruined by the experience, and why does he go to such extremes during their fairly generic fight?

It’s a real mess of an issue, when read by itself, which nobody but me has probably ever done. This story was meant to be a big movie tie-in, but it’s confused and collapses under its own weight. Anyone trying this story is going to be confused by the changes between the film and the comic; any comic fans reading this are going to be confused by why the Lizard flat-out sucks in this storyline. It’s the worst of both worlds. Just watch the film instead.