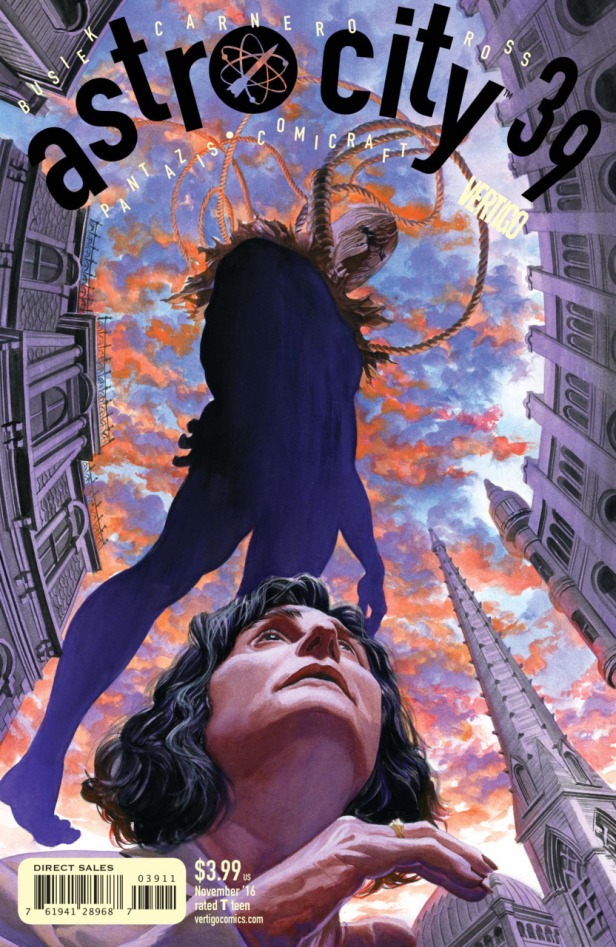 I love Shadow Hill. It’s the Tomb of Dracula of the Astro City universe.

See, after the adoption of the Comics Code Authority, the kinds of comics storytelling you could publish in America were curtailed; you had no vampires, no werewolves, no Frankensteins or zombies. (I remember when Marvel had to call their undead “the Zuvembies” to get around that.) This lasted until the changes to the code in the 1970s that relaxed such restrictions on storytelling, but by then, the Marvel Universe was up and running.

So suddenly, all these werewolves and vampires and zombies and Frankensteins could be running around in a superhero universe they hadn’t been in before. Suddenly Dracula – in the pages of Tomb of Dracula – is fighting the Silver Surfer. What’s the explanation?

Okay, none of this is explicit and it’s probably a bit of a stretch, but I love that Astro City has this Vertigo-style ‘for bigger kids’ suburb, complete with a river that serves as a soft continuity divide – you can cross it, but it’s such a pain. It’s still a superhero universe and guardians patrol the streets, but the guardian that patrols Shadow Hill is a literal hanging corpse.

Speaking of which, we get a glimpse of the origin of the Hanged Man, but a glimpse is all it is. But it provides us with a lot of context; not an innocent man hanged, but a guilty man by his own admission who gives himself over to something greater than himself. The Hanged Man is evocative of the Spectre, of course, but is still an original creation; there is a gentleness to the Hanged Man that the Spectre lacks, as if death has made him cherish life. 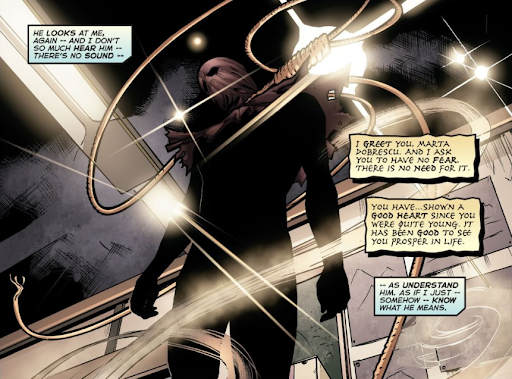 This is a story that is in that mold of Astro City stories where it is a day in the life of a minor character who deals with the weirdness of a superhero universe, and Marta is no different – and like much of this revival, it’s also catching up with an earlier character twenty years down the line, as Marta was the focal character of Astro City Volume 1 #4, back in the 1990s, a story about how the safeguards in one part of your weird-as-hell paranormal universe don’t necessarily apply to another. Much of that same dichotomy is present here – Marta is dating someone from Astro City proper who doesn’t fully get Shadow Hill, and what they have has its limits.

But there is one thing that Shadow Hill and Astro City have in common: a strange relationship with death.

We’ve all heard the jokes about how superheroes never stay dead, to the point it’s become a running plot point in several crossovers and events – Blackest Night for one, House of X/Powers of Ten for another. And the supernatural has a similarly fraught relationship with death, especially in a serialized narrative. In a one-off, you don’t have to answer any inconvenient questions about the protagonists knowing that ghosts are real, but if the narrative continues long enough, eventually they’re going to stop going “oh, wow” and puzzle out what it actually means.

And in Astro City, the answer to the question “what happens after we receive tangible proof of the existence of an afterlife” is “we get used to it.”

You just do what humans do: adapt and get used to it. The afterlife is just part of life and that’s one thing that holds true whether you came back because you were summoned by a séance to sort out problems with your estate, or it wasn’t you who died but your future-grown clone from an alternate timeline. In the end, that’s the story of Marta’s life: realizing what she’s used to, what she can get used to, and what she’ll never get used to. Vampires are easy; understanding what a “pop criminal” is, that’s baffling.

But Marta’s return is not a done-in-one, because next issue she winds up part of the story of one of those crossover characters that can pass easily back-and-forth across this soft tone divide between Supernatural Suburb and Superheroic City – the return of the Silver Adept, who’s having as crummy a day as always. Next week!