“Globalization for a New Age: How to Secure and Maintain a Cohesive and Sustainable World”

That’s the theme of the annual meeting of the World Economic Forum when, for the first time, mutants arrive as invited guests, representing Krakoa. Xavier, Magneto, Apocalypse and Cyclops and Gorgon fly into Davos alongside delegates from other countries. Across a dinner table, they lay out their current motivations, and how they perceive themselves. In turn, the other guests tell them how they see Krakoa, and how willing they are to work alongside the mutants if this whole “mutant nation” business is going to continue for the foreseeable future.

It’s all very civilised. “An olive branch” is extended out to the mutants, who are then invited to sit down and “break bread” with everybody else. But an olive branch is a symbol of peace and reconciliation: that suggests the humans think that before today they were still at war with mutantkind. Before the meeting has even started, the narrative has been twisted by the oppressors to make it look like they are trying to make peace with the unreasonable mutants. The meal starts with a toast “to peace”, again reinforcing the idea that there has previously been a war, and that the current status quo represents only a ceasefire as far as humans or mutants are concerned. The creation of Krakoa is an act of “destablilization”, rather than, y’know, evolution.

Magneto starts things off with a lengthy speech with eloquently dismantles that narrative entirely. Oppressive communication is all about trying to find flaws or hypocrisies in what your opponent is saying, so you can drag them down with their own imperfection. A country like America or Brazil can be as corrupt or hypocritical as it wants because it doesn’t care about being labelled nicely: Krakoa, on the other hand, is something created with the intent of being a perfect, whole society for mutants. One flaw, and everybody in the room will seize on it. See also: how the left eats itself on Twitter all the time. Right-wingers don’t have to account for themselves because they have a pack mentality, but the left-wing will attack and destroy each other at the slightest sign of imperfection. 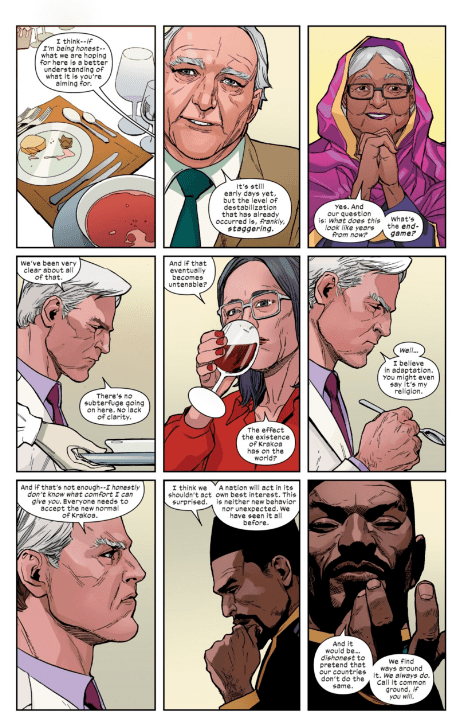 That’s the atmosphere which the mutants walk into, and it’s one which Magneto in particular seems thoroughly prepared for. They are gently offered various pieces of rope to hang themselves with, and each time Magneto calmly rebuffs them as he eats his dinner peacefully. Firstly they ask if the mutants have considered how upsetting Krakoa’s existence is for humans, as they now have to accept the inherent mortality of their species. Magento rebuffs, and is backed up by the Wakandan Attache, who has some experience in these similar matters. Wakanda won’t offer a trade deal, however – the relationship between Storm and Black Panther will have to do for now. There’s some diplomacy.

Magneto isn’t willing to make mutantkind’s ascent into a political statement. It is simply a matter of fact, left for everyone in the room to have to deal with, and so they instead look for other avenues of dissent. Each time they try to probe for a weakness, it has to be noted, they do so as a united force: each question is shared out between the various delegates, so clearly they’ve been practising their oration before this meeting to make sure they’re all onside. After dismissing the idea that mutantkind are dangerous because they’re hiding something, the other delegates ask about the Krakoan drugs, which have to be taken over time.

Here, Magneto again shows that there is nothing here which was not already true. Mutantkind are always going to be the next stage of evolution from humanity, and the Krakoan drugs are openly a long-term requirement to make sure that Krakoa remains recognised as a nation. He tells them that he is doing what every other country does: just as an iPad is designed to break after a certain amount of time so people will need to buy a new one; so Krakoan medicine needs to be taken over a period of time to be effective. Having lost that route of attack, one of the guests tries a blunt attempt at humiliating Magneto to see if he’ll rise to the occasion, stating that there has been no great mutant culture to date. When Magneto growls a little at this idea, another delegate immediately sees it as aggressive. The marginalised are always seen as being aggressive for trying to assert an equal share for themselves.

As Magneto ramps up into a speech about how humanity killed itself and then restarted several times in the past (in the form of the Dark Ages), he’s asked to prove evidence to back up his claims – which anybody on Twitter will have experienced a hundred times before. Another way to try and derail and make somebody lose track of their thread. This is where he pulls the Annie Hall trick and wheels out Apocalypse, though. Because Apocalypse caused the Dark Ages.

Nice trick if you can arrange it. And hugely satisfying to read.

The next tactic from the dinner table is to say “we know what’s going to happen – this is going to cause a war” and aim the accusation at Magneto. The topic of war is brought up by the council, but it’s done so in a way to suggest that Magneto is the one to blame for this hypothetical attack. Here is where Magneto traps them all: he states outright that there will be no war at all. Mutantkind are not going to be violent because they’ve chosen to outlast humanity, rather than fight them. Over the course of an exceptionally-drawn page by Leinil Francis Yu and the late Gerry Alanguilan, he sets out the plan for mutantkind over the next few decades. Complete and open transparency, no room for debate, and he does it at their level. Mutants will make money from Krakoan drugs and they will use it to buy the world. They’ll buy the media, they’ll buy the institutions, and they’ll buy the political connections. Just as humanity dies out, mutantkind will be able to step onto the global stage without the need for a single act of aggression. They’ll evolve into leadership of the world, rather than fight for it.

At this point in time, one of the other delegates drops his politics entirely. He says that Magneto has been transparent, which is why he can’t be trusted. That Magneto’s peace is a sign of his aggression. These are all well-known and often-seen points of debate from the right about the left. And when he is called out for his hypocrisy, he immediately and smoothly lies about something which every character in the room – and every reader – knows isn’t true. This is when Xavier takes off Cerebro for the first time in the series so he can address the room eye to eye, face to face. 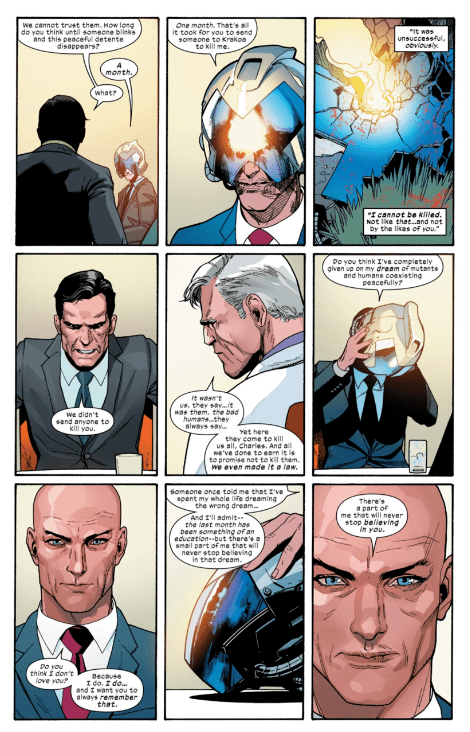 He calmly states that he still believes in his dream, and that his goals remain the same. He shows them that he’s still the same old Xavier they always knew and respected as a thought leader and diplomat. But then at the end of his calm, uplifting speech about cooperation he says “just know it’s the last time it ends like this”. He then puts his helmet back on. Just as Magneto has been the strongest advocate for peace and calm during the meeting – just as Apocalypse has been the quietest person in the room – so Xavier has also defied all expectations for him. He ends the meeting with a threat that if the rest of the delegates won’t treat Krakoa like equals, then Xavier will be forced to treat them as equals. Around the table are people whose countries have set up all kinds of inequalities and hypocrisies in order to keep their people under control and unable to live free and independent lives. As the incoming leaders of the free world, mutants are willing to do the exact same things to them if need be.

All three mutants in the room do the thing you wouldn’t expect of them and it leaves the rest of the council speechless. They’ve tried repeatedly to gaslight Magneto and Xavier, and the mutants have listened and learned from what their “brothers” round the table have tried to turn into the narrative. They instead offer their own narrative, finish their wine, and leave. They’re here, they’re the future, get used to it.

One last thing. The entire time the mutants are having this conversation over dinner, one of the other guests has arranged for a hit-squad based on the floor above and the floor below, ready to burst in and kill all the mutants if necessary – if he’d been able to provoke Magneto to make it look like a retaliatory requirement that these humans shoot mutantkind’s leaders.That’s the mindset of oppressors: they hold a gun to your head in the name of peace and expect you to thank them for it.