Welcome to Spider-Man Roulette! Shelfdust’s Patreon backers were asked to pick a number at random – and now I’m going to write about whichever corresponding issue of “Amazing Spider-Man” they chose! This issue was picked by Patreon backer Caitlin Rosberg, who chose number #3 for the roulette!

“Doctor Octopus! The only enemy ever to defeat Spider-Man!” claims the opening page of Amazing Spider-Man’s 3rd issue, charmingly unaware of its status as only the third Spider-Man comic released to date. Fair enough though: this is what we get in the issue, which follows a cause-and-effect chain to simple and entertaining effect.

It starts with Spider-Man cockily stopping a team of robbers who are wheeling a safe down the street, taking them down with ease and lamenting the fact that criminals don’t offer him any real struggle. Sure enough, that lament is what leads him into a fight with his first super-criminal – and who knocks him down and takes him out. We’ll get to that fight later. What’s interesting about the comic is how it shows Spider-Man’s confidence get an early knock, to the extent that he wonders if he should give in completely. In fighting Dr Octopus, he’s beaten up and thrown out a window – and that’s enough to take him out of action for a while. In modern comics he’d shrug that off as nothing, but here we see a far more frail and vulnerable hero, which is likely the influence of Ditko.

He’d presumably at this point be drawing whatever story he wanted and having Stan write over the narrative script later, in “Marvel Style”, which meant his starker approach to life would be more able to take over the tone of the series. Peter is beaten by the Doc and thrown out a window where he spends several panels recovering from the fall and looking panicked – impossible for Stan to let the character grin the trauma and shake it straight off again. There’s also a straightforward approach to how the story moves forward, as we see Spider-Man go from despondent to resolute: there’s absolutely no need to read a single word, as Ditko’s artwork tells the entire story without any need for outside context or written guidance. He goes back in, relies on his brains rather than brawn, and wins himself victory in the end. A simple story, but one told so well that it’s enjoyable even now, sixty-odd years later.

Speaking of things which just work? Doctor Octopus immediately works in completely the way you want him to. You can see how little Marvel have actually had to do to change the character over the years. By contrast, look at Spider-Man’s first villain “The Chameleon” and how he’s had to be made more contemporary, dangerous, and edgy in order to still work for a modern day audience. With Doctor Octopus, you have a character who hasn’t needed to change in any meaningful way to still occupy the same position and power. He’s a scientist with too much self-belief, and that causes his experiment to go wrong… and fuse pneumatic robot arms to his chest, which he can manipulate at will. When he wakes up from the failed experiment, he gets right back to his lab to try it all again and show everybody he hadn’t got it wrong: it was simply bad luck. In other words? His exact storyline from Spider-Man 2, the movie released decades later. That’s how effectively the character is built in this first appearance.

By giving him a believable motivation, he has had a resiliency which has allowed him to continue on through modern-day Spider-Man comics. It’s that superiority complex which runs through the character – heck, when he “won” and became the new Spider-Man a few years ago, the series was changed to be called The Superior Spider-Man. The arms might be dangerous, but it’s his own sense of self-belief which really means Doctor Octopus is a threat to people. He uses the arms to put himself in a position of power, but when he’s in that position he overestimates himself. In other words it’s the aftermath of a Doctor Octopus story which is the real meat of a story, rather than the fight itself. When the rematch takes place, Peter does something he’ll do a million times over following issues: he webs Otto in the eyes and punches him in the face. Although a physical threat, the real worry is that Doctor Octopus will position himself to cause much greater damage through his experiments. He has a strong punch, but it’s his mind which is most damaging. If unchecked, he could destroy the city through his own hubris. 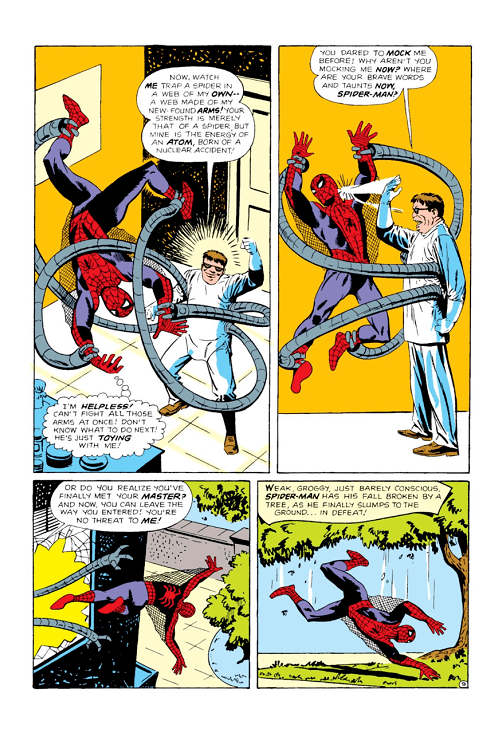 That’s why it’s so smart to have him be the first villain to record a win over Spider-Man. In the very first fight he has with the hero, he defeats web-head and discards him. That plays into the character in two ways moving forward. For one thing, it makes him realise that he has everything he needs in order to defeat Peter Parker, and so he’ll always carry that sense of self-belief into every battle. The minions at the start of the issue know their fight is lost as soon as they see Spider-Man drop down in front of them, but Doctor Octopus believes he’ll win because he’s done it before. The second interesting note is that Doctor Octopus has something in common with Peter Parker in that when they had a chance to grab a victory, they allowed themselves to lose. Peter let the criminal who shot Uncle Ben go free the same night, which resulted in Ben’s death. In a twist on that, Otto doesn’t kill Spider-Man when he has him dead to rights, and wanders off instead.

If Otto had killed Peter then and there, he’d be king of New York by now. That missed opportunity – that lack of hindsight – is something which connects both characters. Whereas Peter is haunted by that and tries to make up for it by always doing the right thing, Otto’s response is to grow more and more superior-minded and fixed in his ways. Everything springs from this first appearance, and it’s amazing how well everything has held up from that very first appearance.