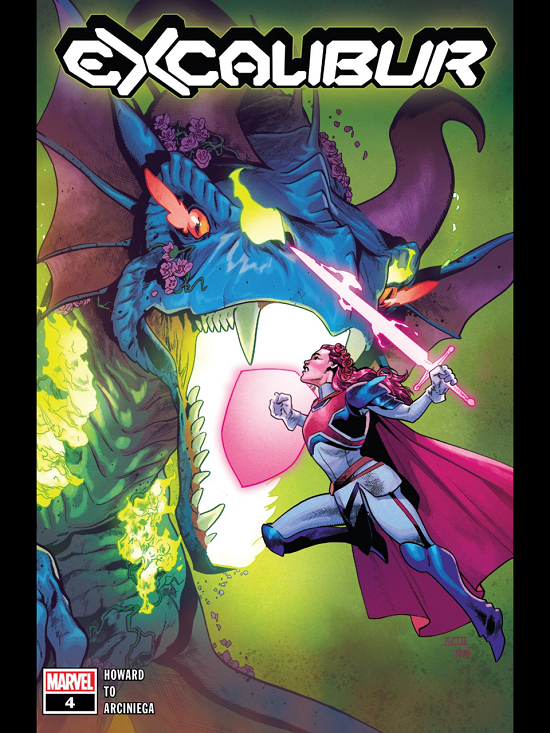 In honesty, the only reason the Queen is in this issue is because we shuffle through Prime Ministers so quickly.

Issue #4 of Excalibur sees Betsy have an off-panel meeting with her Maj which results in Excalibur being formally recognised as the name for her team, and Excalibur being officially signed up as servants of the realm. With Brian conveniently forgotten about for now, the issue turns it’s half-focus onto what Betsy being Captain Britain actually means. As with all things Excalibur, there’s interesting elements to the approach which are bogged down by a general lack of coherency or consistency.

It’s comic book fairytales that the Queen is considered anything other than a model for our stamps, but when Americans write stories set in Britain you have to accept that level of fable to the approach. It adds to the fantasy elements of the series as a whole, although this is an area where it feels like the creative team are trying to play into the real-world unrest of the country right now. If the stuff with the monarchy is a bit silly, then the response of the British people to their new captain is pretty much spot on: they’re racist about it. Countries have a national flag, a national flower, a national animal: if Britain has a national attitude, it’s racist. Gambit arrives at Buckingham Palace and is met by a mob of people screaming “Britain is for humans”.

When you think about it, this is the perfect approach for the team to take here. Krakoa’s existence is the ideal thing for people in England, because it literally means mutants can go back to where they came from. That’s a recurring target amongst our racist population – whenever somebody in a minority group says something which is remotely critical, they get barraged by people saying “if you don’t like it here then leave”. Perfect, then, that this is how they’re depicted in this series. I know earlier I made the required fun of Americans depicting Britain, but this is a spot-on depiction of British sensibilities.

It also plays into something I hadn’t really considered, and which the series probably should’ve emphasised more strongly at the start: Betsy is a mutant, but Brian isn’t. I always forget that detail in their relationship, and it gives this series something really interesting to play with: the British public reject Betsy because she’s not a white guy, sure, but they also reject her because she’s a mutant. As far as they’re concerned she’s non-human, and that puts a target on her back. It’s a really fascinating idea, and it’s played with later in the issue when the newly-appointed representative Braddock has to have a sit down meeting with some rich white family. In keeping with the idea of British ancestry, the family associate themselves with Akkaba – which is usually the name give to Apocalypse’s descendants and cult followers. Here, however, the family are insisting that they pre-date Apocalypse, suggesting that he’s actually the person who invaded their cultural homeland. Again, just to stress, these are rich white people. They didn’t found anything. 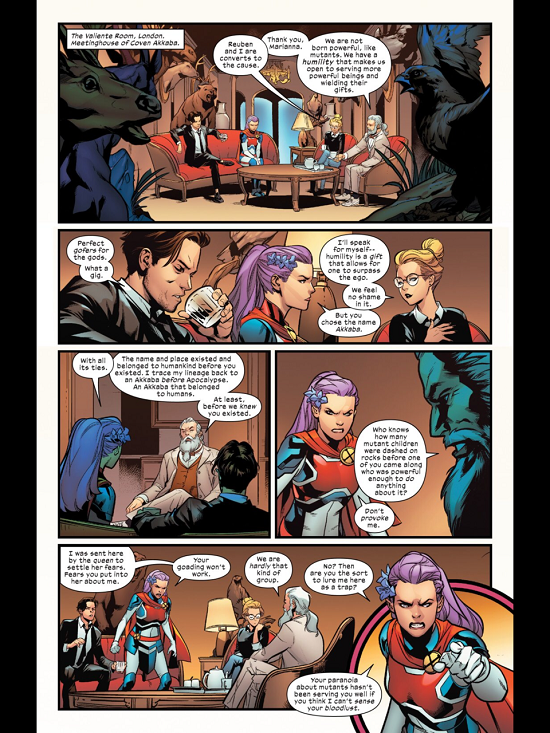 This is classic strategy from upper-class bigots: the idea that they are actually the persecuted party in any situation. “We are not born powerful”, they say, whilst sat in their ancestral mansion. Their worries aren’t founded on any kind of rationality, but the infuriating thing about them is how they present themselves as the most rational people in the room. They have a sense of belonging and place which is upturned by the concept of somebody new becoming Captain Britain. Bringing intersectionality and class politics into the role of Captain Britain has been touched on before, but Howard’s script (and To’s fantastic use of body language for the Coven Akkaba characters, who feel exhausted by having to talk down to Betsy so constantly) really digs into it and finds some fascinating stuff to work with.

Elsewhere in the issue we get confirmation that Rictor’s storyline has basically ended already, and Apocalypse is instead teaming him up with Gambit to go steal some magic crystals from underneath the ground. This leads to another appearance from a team of druids and, well, it’s hard to really work out what’s going on. They seem to love Rictor but hate Gambit, which at least builds into the theme of selective bigotry which feeds through the story. It’s again a side-story which should really lead to fun banter between the characters and give them some likability, but Rictor feels very generic here and Gambit continues to be grumpy and frustrated. It’s not an ideal version of either character, and it drags things down.

A final short story in the issue sees Meggan on Krakoa, where she and Jubilee have a chat whilst holding their respective kids. It’s a strange sequence because it emphasies how much the Brian Braddock storyline seems to have been put completely on hold for now. There’s no indication anybody is going to do anything to actively rescue Brian, and Jubilee spends more time extolling the exciting world of Krakoa than in comforting Meggan – who just lost her husband. It’s part of the problem of working towards the long-term in a medium like comics, which exist on a monthly basis. It’s very hard to put a story on the back-burner when it means characters have to actively forget their friends or family are in trouble.

When Jubilee arrives back in Krakoa, she’s delighted and seems to have no worries at all about the situation they left Brian (or Rogue) in. It again feels faintly cruel? It’s a very strange thing to read. The main point of the scene seems to be to remind us that Jamie Braddock is alive again, and wandering around Krakoa. The plan must be to use him as the unpredictable force who gets everybody back to Otherworld so they can save Brian… but there doesn’t seem to be any immediate interest in doing that anytime soon. Excalibur continues to be a strange series, which doesn’t really connect all its ideas into something coherent or consistent. At least Rogue is awake again at the end – hopefully she’ll bring a bit more energy into the next few issues.