Welcome to Spider-Man Roulette! Shelfdust’s Patreon backers were asked to pick a number at random – and now I’m going to write about whichever corresponding issue of “Amazing Spider-Man” they chose! This issue was picked by Patreon backer Tim Maytom, who chose number 344 for the roulette!

Do you think Stan Lee ever dreamed of a day when Spider-Man would sneak into a cocaine factory? This time round the Spidey Roulette has taken us into the early 90s – and with that comes the cocaine-soaked excess that only this era ever truly delivered to us, a grateful audience. Last time we had a comic from the Micheline-era of the series, Todd McFarlane was the artist, but this time those duties fall to McFarlane’s fellow Image founder Erik Larsen. Larsen’s artwork is as splashy as his contemporary, but with more exaggerated facial features and instincts. The eyes are larger and rounder, the eyebrows are firmer, and the chins could knock holes in titanium. The anatomy is somewhat skewed, but it’s all in service to providing something that feels larger than life, exciting, and chaotic.

A perfect time to start introducing some more symbiotes, then. This issue features the first appearance of Cletus Kasady, who’ll go on to become “Carnage”, the most manic of all the symbiotes to appear in the series. He only gets a few panels, but in each of them Larsen goes completely haywire with facial anatomy in order to make him look horrifying – a living nightmare to keep children up at night. He has bright red eyebrows which fly all over his face, coupled with a giant forehead, wide-open eyes and gleaming, gum-heavy teeth which evoke a certain clown over at the Distinguished Competition. It’s a really scary depiction of a human, and sets up the character for what he’ll eventually become further down the line.

That hyperactive sensibility through Larsen’s art gives the comic a wired feeling, like it’s shaking at the wrists and frantically tapping one foot against the floor. The characters are bold and brilliant in appearance, and the settings are far more vast and uncanny than before. The villain sat at the top of the pyramid at this moment in time isn’t the wide-faced Rhino or even the newly-created Cardiac (more on him in a moment) but instead an old white Republican dude who listens to classical music in his secret iceberg lair. Things are going global for the street-level web-head, and the series continues its sub-Bond approach to international espionage. “Dear me,” quoth the villain, “can’t I spend a few days in my vacation lair without some disaster cropping up?”

He’s referring to the cocaine factory I mentioned right at the top, which is where this issue starts and ends. Spider-Man is living his most uninvolved self as he crawls through the factory, taking photos for the paper so everybody can be shocked by the existence of drugs in New York City. Spidey doesn’t have the slightest inclination that he should maybe use his powers – of his connections – to take down this factory, because he has the financial incentive to sell his photos to the press. Spidey’s need to make money to live the life he’s accustomed to takes precedence over the need to stop crime and take down corruption. Ditko would not be happy.

Luckily for us, the scene is interrupted by the appearance of Cardiac, a high-powered doctor who channels his money into life as a vigilante: and a very proactive vigilante at that. Cardiac smashes through the wall, all bluster, and proceeds to take out all the guards. He’s stopped by Spider-Man, though, who doesn’t want Cardiac causing any more damage because “this operation is strictly legit!” It’s a really strange moment for the character, as he basically insists to the newcomer that there are some types of crime which can’t be taken down? That Cardiac – who we later see say that he holds a similar vow not to take lives – is the villain here for trying to stop a “legitimate” cocaine-smuggling operation from continuing. Spider-Man: white liberal? 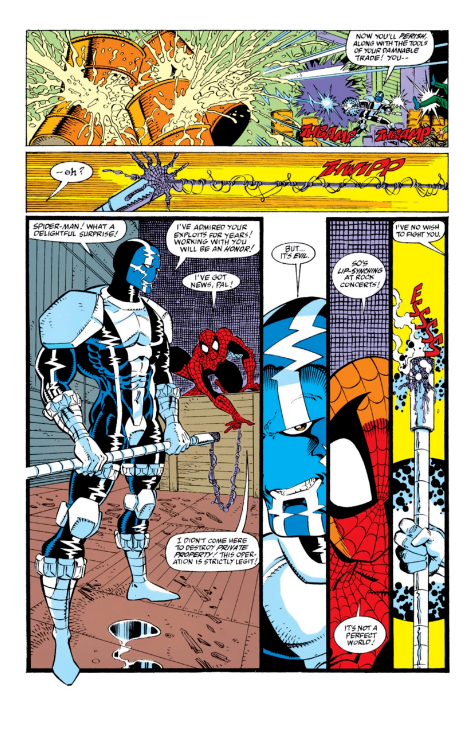 Our Brahms-living antagonist certainly seems to agree, because he only pays attention to what’s going on when he realises that his operation has been hit. Spider-Man’s brand of vigilantism doesn’t hurt him in the slightest, and the suggestion is that only the henchmen get hit by jailtime – whilst the rich white guy at the top doesn’t notice a thing. It’s only when Cardiac actively starts legitimately striking out at his system that the villain gets worried.

It’s worth noting that Cardiac’s secret identity is that of an African-American physician. He has the money that Peter doesn’t have, and that affords him a similar level of power – but through his upbringing he’s learnt a different kind of responsibility that Peter ever needed to. Casual moments throughout the issue show Cardiac’s more involved approach to helping his city: when he has to cancel a charity dinner, he asks his receptionist to double his contribution. Cardiac, clearly, understands money. That’s the advantage – and disadvantage – which keeps him thinking differently to Spider-Man.

There’s that thinking “it takes money to beat money” and whilst that’s flawed (in real life rich people hold each other up rather than tear each other down) here we get to see some of that fantasy in action. Peter beats up minions and waits for them to come out of prison: Cardiac rips down the corrupt institutions and actually hurts his millionaire enemies.

“There’s so much evil,” he says, “so much of it condoned”. It’s a truly fascinating approach to super-heroes, and why – whisper it – Cardiac makes for such a more interesting character at this point than Spidey himself. As Spider-Man’s world flies off into druggy, silly madness, Cardiac provided a grounded counterpoint which keeps the series going despite its own worst tendencies.