Welcome to Spider-Man Roulette! Shelfdust’s Patreon backers were asked to pick a number at random – and now I’m going to write about whichever corresponding issue of “Amazing Spider-Man” they chose! This issue was picked by Patreon backer David Canham, who chose number 144 for the roulette! 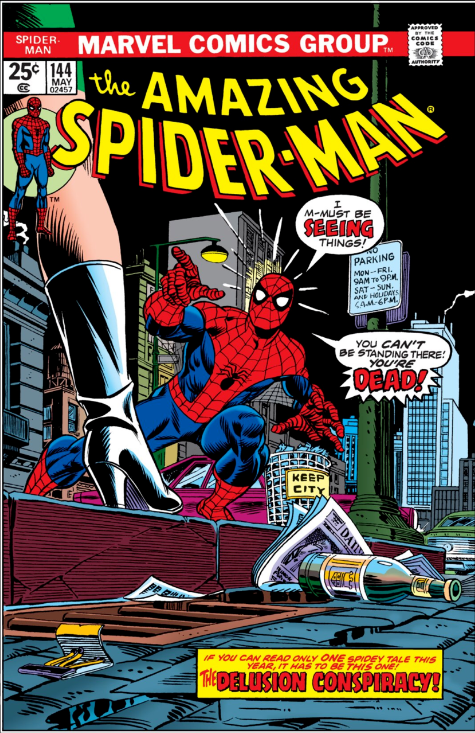 This is an issue which sits in the shadow of Gwen Stacy, who was killed off in-storyline a year or two ago but is still resonant in Peter Parker’s life at this point. The issue starts by implying – heck, the cover basically confirms – that she’s going to walk back into his life somehow, and repeatedly returns to her ghostly presence in the background of the story. She’s around, but she’s also not present properly until the very end of the issue, when Peter walks in and finds her waiting for him. The spectre of Gwen Stacy haunts the issue, and nothing else that happens really matters – not when she’s there waiting for us at the end.

It’s interesting to think a little on Gwen Stacy, and her death, and how it resonates so quickly back into this storyline. This issue came two years after Gwen was killed, and continues on with the same writer who wrote her death scene. Bringing her back at this point, albeit as some kind of clone or something, is a very curious choice, and it makes you wonder what kind of thinking was going on behind the scenes for Marvel at the time. Was there a feeling that her death was a mistake; part of a longer story? Or did they accidentally hit on something much bigger and far more controversial than they were expecting, and did they subsequently decide to kick the wound a little harder and see what kind of bigger reaction they could get from the readership?

Friends, I have not reached this section in Sean Howe’s book yet, so I don’t know. Instead, I’m going to do the courageous thing and speculate around the subject in a fairly general fashion, because each option is interesting in its own way. What Gwen does in this issue is to absolutely dominate everything despite barely appearing; having no demonstration of personality; or any understanding of what it is that’s brought her back. She doesn’t have any lines. She just… appears. 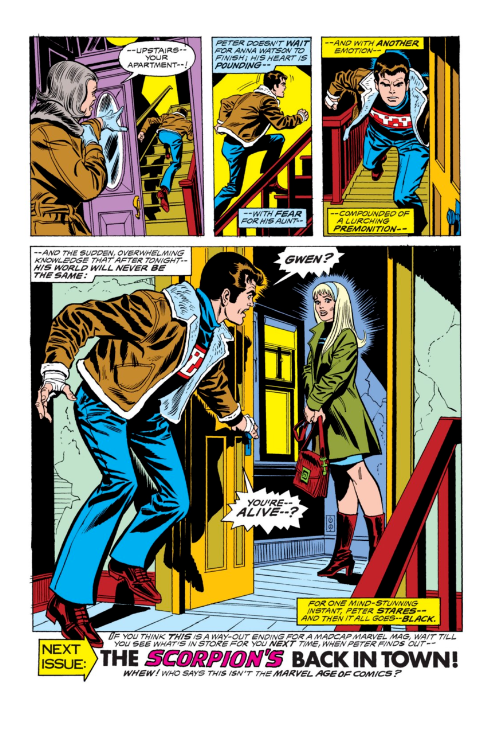 As I’m sure many of you reading this will agree, sometimes the memory of someone can be more important and devastating than who that person actually was back when they were really in your life. Somebody can grow in power in your mind without them being present in your life anymore, and that’s true for Gwen Stacy – her death was a huge and important moment for Peter Parker beyond who she was as a person.

That speaks a little to the idea of “fridging”, which is the plot contrivance of killing off a female character in order to motivate a male character (usually inspiring him to “revenge” before he subsequently forgets about the dead woman forevermore once that story is over). But Gwen’s death wasn’t a fridging, because she had her own life and was a continuing character in the Spider-Man series for a long time. Her death also changes Peter as a character and redevelops him: the tragedy with Uncle Ben was his motivating trauma for a very long time, but there’s something important in the way that he continually picks up further baggage as his life moves forward. Gwen’s death weighs on him in a different way to Ben’s death, even though they both then became mythic figures to him as he tried to subsequently move on. Ben becomes the perfect mentor figure: the man who gave him his code and creed for how best to live his life. What, though, does Gwen leave Peter behind?

It’s arguable she was a character, because there really wasn’t all that much going on with her. That’s a product of the time she was written in, but it’s not like readers can go “ah Gwen Stacy, I liked that she was a big fan of baseball” or “Gwen’s sense of humour was really memorable”. She existed, but that’s perhaps some of the most charitable description that can be given to her. In recent years, with the emergence of “Spider-Gwen”, we’ve now got a Gwen Stacy with a memorable personality and character – she’s got a band and everything – but at the time she was a little invisible. Her death changed that, because she went from being the faintly bland love interest into being the dead love of Peter Parker’s life. She stopped being an active presence in his everyday life, the girl whom Amazing Spider-Man’s writers had to give dialogue to and weave into each story. Instead, they had this opportunity to rewrite her into something grander and more spiritual.

Her outfit at the time – dress, red boots, and headband – suddenly became an iconic look rather than the clothing of a young woman. As comics moved forward through the decades, Gwen was locked completely in time and place, which meant her clothing quickly fell out of fashion and felt retro and dated – in essence giving her the feeling of being trapped in amber. Whereas other characters like Harry Osborn or Mary-Jane changed with the times (despite not aging due to the slow timeline of Marvel comics), Gwen couldn’t change at all. Uncle Ben died before we got to know him, but Gwen died after readers had spent years of seeing her as a supporting character – and suddenly she was gone and all that was left was the memory of her.

It’s something which doesn’t strike me as being the intention of the creative team, but more a function of how comic books work as a medium. Every moment with Gwen before her death is a definitive image – somebody drew it and framed it – and her absence is felt more keenly because of it. She may not have been the most interesting love interest Spider-Man ever had, but she was there and now she’s gone, and that’s an absence which sits in Peter’s heart more firmly than anything else.