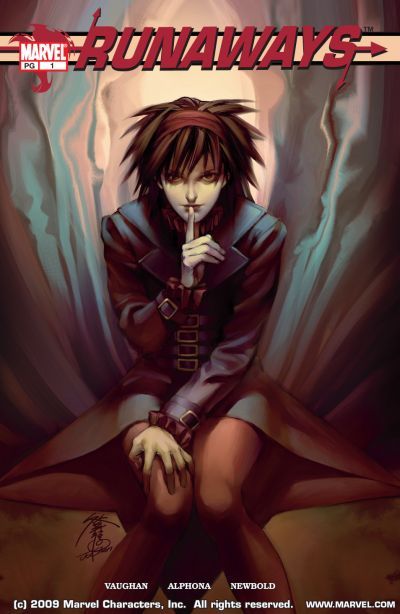 This week it’s time to find out about the secret lives of our evil parents, as we look at the comic which ended up in 18th place: Runaways #1 by Brian K. Vaughan, Adrian Alphona, David Newbold, Brian Reber and Paul Tutrone!

Runaways follows a group of kids whose parents throw a party each year: after spending time introducing each family separately, Vaughan’s script then hurls the very different children together into an awkward, tentative group as they wait for their parents’ private meal to finish. When they get bored and go eavesdrop, however, it leads to a massive surprise at the end – something you wouldn’t have expected to happen in a Marvel comic. Luckily, this week Matt is joined by special guest Adrienne Resha to talk all about it!

Come back next week….. as Matt will be talking to Christian Hoffer (him again!) about Ultimate Spider-Man #1!

Adrienne Resha is an academic and comics critic whose work has been seen in Eisner-winning publications like WomenWriteAboutComics and INKS. You can find her on Twitter here!

Matt Lune is a critic and podcaster who has written for publications including PanelXPanel, The MNT and Multiversity. You can find him on Twitter here!

One thought on “Shelfdust Presents: Runaways #1 with Adrienne Resha”