You’re reading The Complete Infinite Crisis, a Comprehensive and Encyclopedic look through the universe-changing superhero event published by DC from 2005 to 2006. Shelfdust are proud to provide a complete overview of the story, and everything that happens in it. The overview was going great until we got a bit confused about some of the things which were going on – so we’ve had to call in some experts to help out!

When we last left off, Caitlin Rosberg had helpfully been explaining some Batman backstory… but in doing so, she mentioned “Earth-1”? What does THAT even mean? How many worlds are out there? I had to turn to expert Ritesh Babu to learn everything about this!

The last Q&A ended with Caitlin mentioning “Earth-1”. Does that mean… there are other earths?

Ritesh Babu: Yes! Absolutely. Boy are there a TON of Earths. That term, Earth-One/Earth-1, however you wanna put it, came about during Justice League Of America #21-22 in 1963, just a year after Michael Moorcock’s The Sundered Worlds story, which laid out a massive multiverse and 1961’s The Flash Of Two Worlds, which played around a bit with the Many Worlds interpretation. There, Gardner Fox and Mike Sekowsky basically lay out ‘Earth-Two/Earth-2’ alongside Earth-1, building on the aforementioned Flash Of Two Worlds. That Flash story was very much a way for Gardner Fox, renowned editor Julius Schwartz and DC Comics at large to sort of connect together its disparate history.

They’d revamped the basic ideas of a lot of existing characters in radically different ways in The Silver Age of the 50s and 60s, leaving behind The Golden Age of the 30s and 40s. And that Flash story allowed them to say ‘Hey! All those old guys, like Jay Garrick The Flash, who Barry Allen read about as a comics reader, they just exist on another Earth! All of those old stories of the 30s and 40s actually took place on Earth-2!’

And so DC built its multiverse from that, just adding more and more Earths as time went by, to suit whatever need they had at that point or to explain or handwave away all that they felt they needed to. That JLA story we discussed earlier, the two-parter called Crisis On Earth-One/Crisis On Earth-Two would mark the establishment of the iconic term ‘Crisis’ and would be the start of regular annual Earth-One/Earth-Two teamup stories. At the end of the story, while we’ve established just TWO Earths, they tease out a potential Earth-3 in a line of dialogue.

How many other Earths are there at this point?

Babu: Oh, a whole bunch. I mentioned the Earth-3 tease earlier. Well, in the very next year’s Justice League Of America #29-30 story Crisis On Earth-Three (1964), they finally paid off the tease and revealed a whole third Earth, where in everything was essentially the opposite of Earth-1. Instead of The Justice League, valiant team of superheroes, you had The Crime Syndicate, a group of supercriminals rampaging about in a world they held power over. You had counterparts designed for all the key characters– Superman/Ultraman, Batman/Owlman, Wonder Woman/Superwoman, Green Lantern/Power Ring, The Flash/Johnny Quick, etc.

And from there, DC just kept going, making more Earths, adding to their very weird multiverse, where in one world’s fictions, its comics, were actually another world’s reality. You could ostensibly read DC Comics in Earth-1 to find out what was up and happening and ‘catch-up’, if you will, on Earth-2. So you got Earth-X, a world where in World War II never ended and just kept going for 30 extra years and that provided a setting for The Freedom Fighters roster of characters to inhabit and operate in. You got Earth-S, the world of Billy Batson, Captain Marvel and The Marvel Family cast of characters. That provided those Fawcett ideas a whole universe to inhabit as their own and be the center of, rather than having to share the stage with the key DC figures. You also got Earth-4, the home of the Charlton Comics characters, such as The Question, Blue Beetle, Captain Atom, Peacemaker, Nightshade and more.

They even came up with designations for the ‘Real World’, calling it Earth-Prime. They made up Earth-A (meaning Alternate), where in you had ‘gangster’ versions of the key characters via The Lawless League, not unlike Earth-3. Then they came up with Earth-C, where in Captain Carrot and his cast of The Zoo Crew characters resided. The realm of the animal cartoon heroes. So the short answer is about 10, give or take, depending on what you ‘count’. But the ones I mentioned are all sort of the key ones worth noting.

Do the other Earths interact with each other at all? Are they connected somehow?

Babu: Barely. Usually interactions were, mostly, limited to the aforementioned annual team-up stories in Justice League Of America. So you could or would have Alan Scott and Hal Jordan interact in the pages of Green Lantern or Barry Allen and Jay Garrick crossing paths in the tales of The Flash every now and then, but for the most part, they kept those kinds of stories contained for that special annual team-up/crossover. And if you’ll notice, the examples I used, GL and Flash are only applicable due to their creators. Gardner Fox and John Broome were the key voices on both titles (Broome was the central one, it should be noted) and Fox came up with the DC Multiverse, as we’ve noted, so it makes sense that he’d use it in books he was doing when he could here and there. But John Broome was, interestingly, the one who came up with the textual ‘origin’ for The Multiverse. The idea of Krona, this dude who sought the truth of creation and the visual of The Hand Of Creation? The blue hand? That was John Broome (with Gil Kane!) in the pages of Green Lantern (Broome had a bit of a hand-obsession. Hand Of Creation, all those Hal Jordan Hand constructs, Black Hand. So many hands…).

So these two guys shared the load, the origins, development and legacy of The Multiverse. Everything to come after and since is built on their backs and the work they did.

And as for the connections, yes! 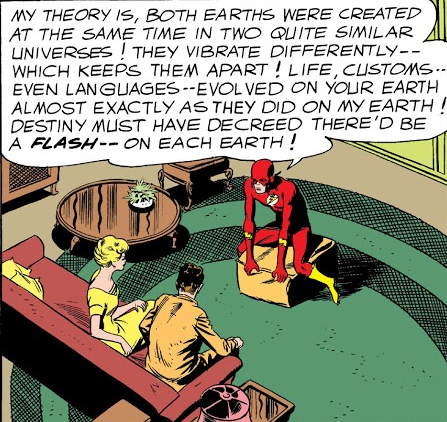 All of the Earths were linked via vibrations! They all existed in and inhabited the same space, vibrating at merely different frequencies. So merely by attuning yourself to the specific vibration of an Earth, you could pop out of your reality and travel there. The Flash was the pioneer and master of this and used this method almost exclusively. So all of these Earths/Universes are basically making sounds you just can’t hear, like in a big, loud cosmic song. The multiverse is singing, always!

Apart from that, only two other key ways to travel and connect to another Earth existed. One was via a Green Lantern Power Ring or an approximation. Notably, Earth-3’s evil GL, Power Ring, brought over The Crime Syndicate to other Earths via this power. The other was through what was dubbed a ‘Transmatter Cube’, which existed on each reality. The JLA Satellite and The JSA Headquarters both housed their reality’s respective copy, which they used to travel about to one another’s realities and teamup. They were like gateways/doorways, essentially.

The various Earths/Universes are also connected by the fact that they’re all Matter-Universes, too, unlike the singular dreaded Anti-Matter Universe. Famously, they had to unite and face off against The Anti-Matter Man in Justice League Of America #46-47, in a story titled Crisis Between Earth-One and Earth-Two. It is, in essence, the story Marv Wolfman and George Perez take a number of their cues from for their own iconic Crisis On Infinite Earths (1985), with the threat of a terrifying, almost divinely powerful and unknowable cosmic being of Anti-Matter arriving to destroy the Matter-Earths. Matter in union against Anti-Matter is the one big connection and it’s one COIE exploited big time, to basically smash together the various Earths into one single Earth.

Blimey! If they ever need someone to write the book on universes, they should get Ritesh on it. Thanks squire! This answers just about everything, to be honest, which leaves my mind free to think about all sorts of other wonderful things like… like, if that’s what the universe is… then what the FLIP is an *antimatter* universe?

Ritesh Babu is a writer and critic whose work has been featured in publications including PanelXPanel, XavierFiles, and Adventures in Poor Taste. To find more from Ritesh, you can follow him on Twitter here!

2 thoughts on “Infinite Crisis with Ritesh Babu: What do you mean, “Multiverse”?”