Welcome to Spider-Man Roulette! Shelfdust’s Patreon backers were asked to pick a number at random – and now I’m going to write about whichever corresponding issue of “Amazing Spider-Man” they chose! This issue was picked by Patreon backer JD Boucher, who chose number 666 for the roulette! 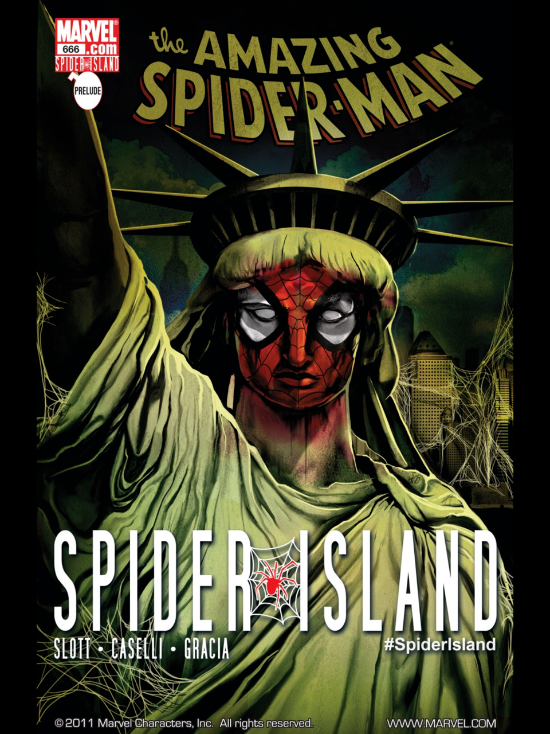 Oh JD, you and your Satanism, you scamp. But if you were expecting issue #666 of Amazing Spider-Man to be a scary one, then you’re in for a surprise. This is one of those slice of life issues, which follows Spider-Man as he goes about a typical day – albeit a very busy one, with writer Dan Slott getting to wallow in the world he’s built around the hero. Slott has written more issues of Spider-Man than anyone else, and went into being the main writer for Spider-Man after being part of the brain trust who ran “Brand New Day” – meaning that he got to start working on the foundations for his run alongside several other writers, which gave him a strong run-up at the character. Even with that help, it’s still remarkable how much he was able to change and develop Spider-Man during his tenure. We’ve got his new job and work colleagues at Horizon Labs, a new girlfriend Carlie Cooper, new supporting cast characters like Norah (who here gets tied to Phil Urich), J. Jonah Jameson in the Mayor’s Office, Aunt May married and leaving New York, Shang Chi providing self-defence lessons – there’s just a huge amount going on here.

And it’s all inside 32 pages, remarkably. Slott really ramped things up for the series, even if it was of course mostly walked back by the time he left – all toys must be left as they were in the sandbox when final bell rings for the day. Adding so much into Spider-Man’s life leaves very little room for wasted space, which means everything here is delivering some kind of purpose. The issue drops quickly in on something, then skips back out so Spidey can head off into the next scene. For example, he steps into a fight with Hydro Man and freezes him within the space of three panels, leaving two panels for a group of younger heroes – including Gravity – to admire him as he then swings off to the next thing. The issue is a race, which Slott wins… but Spider-Man is also racing, which the issue makes clear is not in his best interests.

With Spider-Man essentially turning into a professional in all respects, the issue is trying to establish that he’s doing his thing “properly”, which’ll then clash with all these other people who’ve randomly picked up his powers as part of the storyline. This is marked in a scene where he goes to a poker game with other heroes: previously he wasn’t somebody who had the money or ability to get in that room with his peers, so his ability to sit down at the table and play is their acknowledgement that he’s a “professional” now – he’s one of the gang. As a prologue issue for “Spider-Island”, however, there’s a through-line of Spider-Man not noticing that people around him are starting to display powers similar to his own: there are people swinging through the city behind his back, and he’s running so fast that he’s got no time to see or process it.

This speaks to the idea that Spider-Man runs at two speeds, and this high-speed isn’t something he can actually maintain for a long period of time. He either walks on the ground and feels sorry for himself, or he flies through the sky and doesn’t consider anything. That includes his girlfriend calling to say she’s worried about something, which he blows off twice.

There’s a little dialogue in here about Carlie which I don’t care for: Dan Slott is very much of the Joss Whedon “girl power” approach to female characters, which lets them beat people up but also doesn’t give them a huge amount of rounding out as characters. When she calls Peter and says “we need to talk”, Peter then spends several panels worrying about it and doing the whole “ball and chain” sort of routine from the 1960s. “I’ve tried to make time for Carlie. Maybe it’s not enough?” he asks himself, in the process sounding like the sort of person who’ll be on Reddit’s Relationships thread complaining about his girlfriend in a month’s time. Spider-Man is caring and helpful to everyone, but there’s a trend that the closer you are to him, the icier he’ll be if he feels you’re doing something wrong. It happens to Mary Jane a lot, but here his almost disdain for Carlie in that moment isn’t particularly palatable.

You can also draw a line between that moment and Peter’s interaction with Norah, and her new partner. Peter, running so fast, hasn’t processed that she’s got a new boyfriend, and when he speaks to her he’s almost accusatory “I thought you were dating Robbie?” he asks, and the pacing of the scene suggests that he’s somewhat accusing her of having too many partners. Again, it just feels like a poor approach to how Peter deals with the women in his life and robs the scene of its purpose (it’s meant to show how Phil Urich is unpredictable and moody). It’s one thing for Spider-Man to be so fast-paced and hectic that he doesn’t have time for anyone, it’s another thing that he seems particularly passive-aggressive to all the women he meets. This isn’t a new complaint about Slott’s writing, but worth mentioning again. 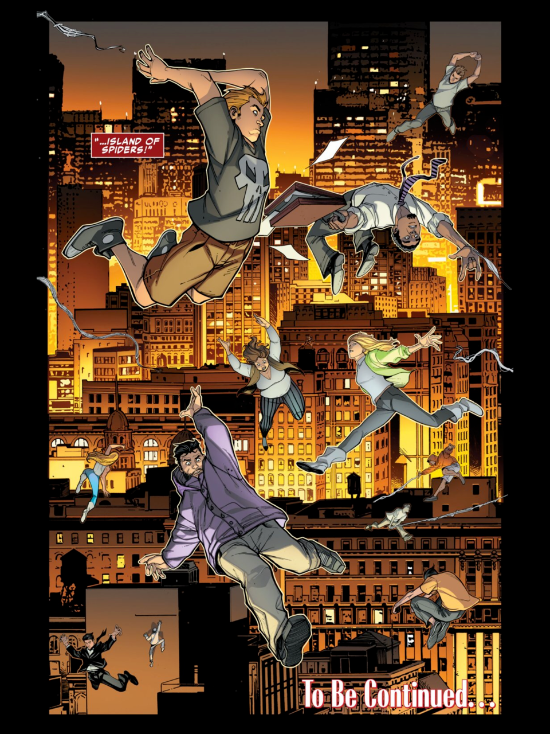 With the message being “here is a super competent Spider-Man”, anything that doesn’t seem super-competent of him stands out more. Regardless, the framing of the issue, which starts with Spider-Man swinging by himself and ends with all the new “Spider-Men” swinging haphazardly around together, helps convey the point very strongly. Perhaps like Spider-Man himself, this is a very functional approach to superheroes, even if it misses a bit of the character that you’d normally like to see from the character.