There’s a good comic inside Excalibur which the editorial team can’t quite tease out to the surface. Everything in the story is essentially okay, and you can see how this could all be tied into a fun, fast-paced fantasy series which takes the original Excalibur formula and adds some of that popular D&D energy to it. However, the comic we actually get is such a disorientating jumble of a narrative, which lingers on all the least interesting parts of the story. Issue #3 brings in Rictor to the team, sort-of, and his story provides a potentially interesting frame for a primary narrative which doesn’t really make much sense at all.

We’ll come to Rictor later, but let’s start off with the main story here, which has seen Captain Britain, Jubilee and Gambit head into Otherworld – where Jubilee’s son Shogo has turned himself into a dragon, which is very handy for transport – and complain their way into achieving absolutely nothing during their time. Gambit is particularly bad here, whining about Rogue rather than transferring any of his attention into emotional support for Betsy, who is experiencing a similar situation. It feels like Tini Howard’s script is trying to emulate some of that Star Wars energy where everybody negs one another for the entire length of a story and it comes off as charming, and that’s charming is certainly what Marcus To wants to provide. The problem is that the tone that comes across is “dismayed”. Jubilee has no spark to her, Gambit’s roguish charm is lost, and Betsy is stuck in the middle as a character who has just been redesigned and doesn’t have anybody good to bounce off from. Having given her a nice new costume and a position which fits the character, what she really needs is a sense of fun which lets readers appreciate her new role within the X-Men’s world.

Instead, she has to act as the buffer between two resentful characters who don’t want to be there, and it means she can’t be fun herself. The characterisation is off in a way which prevents the central characters from being likeable – and Rogue, the most dynamic member of the cast, has been locked up in a coma for several issues. It really doesn’t help that their goals are clear but their journey is not. 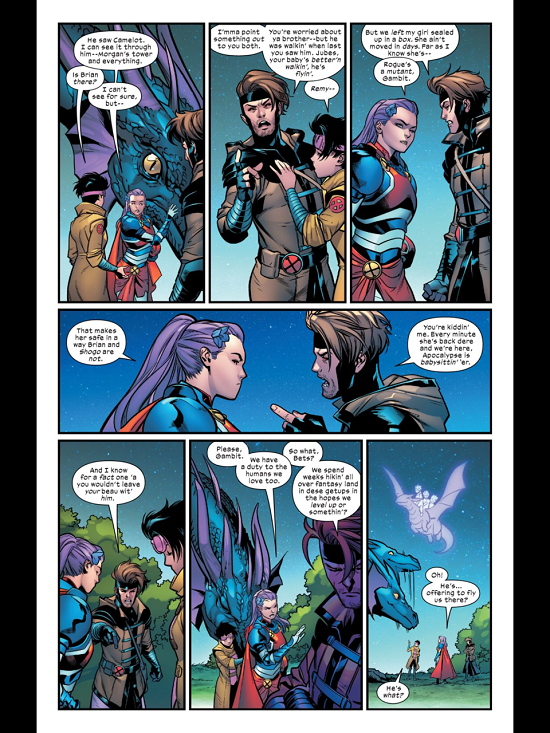 We know they each have a loved one they want to protect, but the stakes aren’t presented for any of them. Shogo is a dragon now, but Jubilee acts like this makes him even more vulnerable than before; Gambit doesn’t trust Apocalypse with Rogue but we’ve not seen any signs that there are any nefarious plans for her. And Betsy’s quest to save her brother is cancelled for seemingly no reason in this issue.

They find Brian all decked out in BDSM gear near the end of their story here, and a swordfight ensues which gives the characters a chance to go through the classic “I know you’re still in there” “the brother you thought you knew is gone” routine. But Betsy is winning the fight and finding remnants of her brother’s memory are still in there when the fight is abruptly called off for no apparent reason. Gambit and Jubilee pulls Betsy away and they fly off just as it looked like the battle was being won? Clearly the story needs more issues to continue, but this suffers because the storytelling is muddled. We know Betsy wants to save her brother, but we also know that Jubilee and Gambit don’t want to be in Otherworld – so their decision to pull her away from battle seems self-motivated. They don’t want to help their friend because they’re so absorbed in their own goals. Again, it’s an unfortunate confluence of factors which make the characters unlikeable. This is Jubilee! This is Gambit! How are they not fun to read about?

The jumbled storytelling raises up again in Apocalypse’s section of the story, in which he tracks down Rictor because he needs somebody who can control stones. There’s… some kind of magic mutant stone he wants to create, which will let him walk straight into Otherworld for whatever reason. It makes sense for Apocalypse to have secret plans which we aren’t aware of, but there should be some kind of basic plan he has which we lead with. His role in the story is to help whatever the twist will be, but he needs to provide us with a distraction before he can trick us.

It’s established that Rictor is unable to control his powers, and whenever he steps on the ground he causes earthquakes. It’s by far the most interesting idea in the issue, which makes it a shame that it’s essentially then removed from the story with a wave of Apocalypse’s hand. Rictor can’t control his powers, but Apocalypse says he can, so now Rictor can control his panels. This could have made for a really interesting issue by itself, but crammed into a framing sequence it struggles to convey much of anything. It feels like Rictor walks into the issue with a story and personality, and finishes the issue with both those stripped away because he’s a convenient plot piece to help Apocalypse out next time. Excalibur seems to be struggling as a series because it’s not being reigned into a controllable shape: the characters have wandered off and lost their most interesting character traits, whilst the story doesn’t seem to know where it’s short-term goals are. The long-term destination is clearly going to be the rescue of Captain Britain, but in the meantime we’re all stuck here twiddling our fingers, waiting for something interesting to happen.