Welcome to Spider-Man Roulette! Shelfdust’s Patreon backers were asked to pick a number at random – and now I’m going to write about whichever corresponding issue of “Amazing Spider-Man” they chose! This issue was picked by Patreon backer Rob Brewer, who chose number 476 for the roulette! 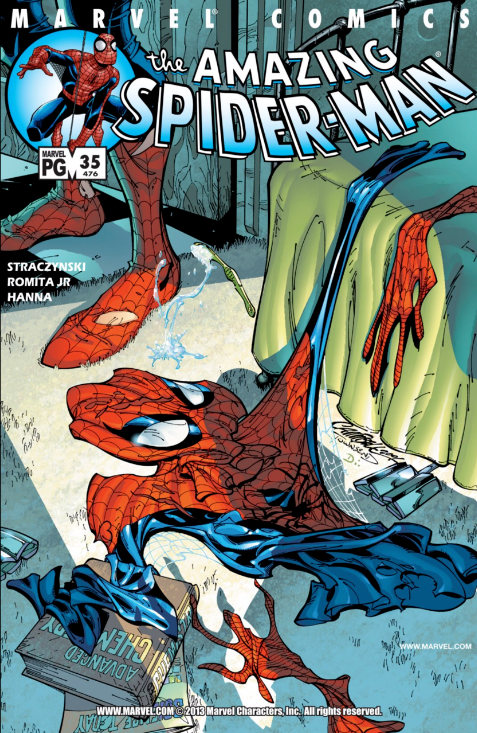 Issue #476, AKA Amazing Spider-Man Vol 2. #35, is the end of one of J. Michael Straczynski’s big storylines: Morlun. Attempts to add a new master villain to Spider-Man’s crowded rogues gallery have been mixed over the years, because it’s hard to create someone who can immediately command the history of a Goblin or Mysterio. Just like with the Batman franchise, new additions to the villains lineup tend to make a big splash before being diluted down into becoming a “sub-boss” for one of the longer-term enemies. Professor Pyg, for example, was a huge addition and has made his way into cartoons, games, and more – but in the comics, he now tends to be working for someone else, rather than being a master antagonist for the Dark Knight.

I don’t know what happened to Morlun after this story – yes, yes, I know he dies in this story, but that’s hardly an ending for him – but a brief look on Wikipedia suggests he’s been roped into the alt-reality Spider-Verse stuff which has taken over aspects of the franchise in the last few years. Here, we’re already in the end game for this particular storyline, as Spider-Man is forced to make a last stand in an old factory whilst Morlun slowly walks over there to kill him. It’s the old “Home Alone” finale, which more recently has been rebranded as the “Skyfall” ending – what does a hero do when they’re trapped in a building by themselves, and they know the enemy are on the way?

Sadly, no traps involving Micro Machines scattered on the floor or dropping an iron on Morlun’s face. Instead, Spider-Man does a bit of the ol’ mad science. It’s handy that Peter never really got a specialism for his intelligence: if Stan had nailed him down as a chemist or an engineer, it would’ve caused so many problems for writers down the line. Instead, Spidey is just generally “smart”, which means he can turn his hand to whatever’s required in the next story. It also meant that when he does occasionally have a storyline where he finds success in his career, he has to spread his bases – he can either become a teacher, as he does at this point in time, or he has to be a mad scientist without the needs for a specialism, as he did when Dan Slott wrote the character. So the idea he’s intelligent is a core part of his character, even as writers remain completely vague on what exactly it is that he’s good at. 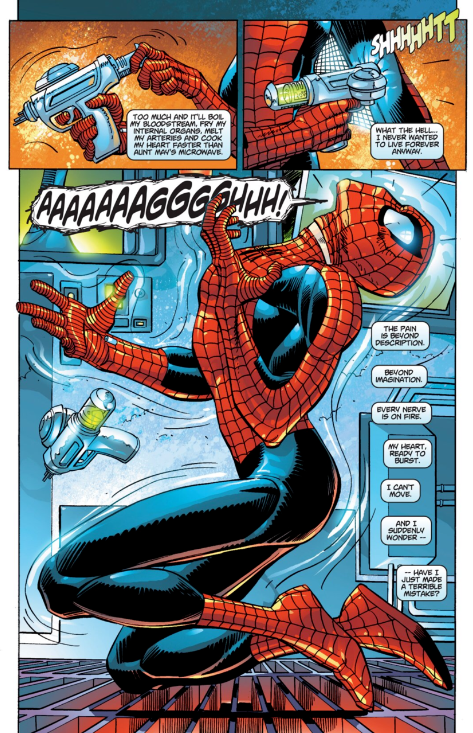 Here’s he’s doing some kind of biological manipulation, based on the fact that he’s got radiation flowing through his blood because of that spider bite. He increases that level of radiation to incredibly high levels, which means when Morlun takes a bite out of him, he gets that full dose of radiation. Essentially, Spidey turns himself into the trap: into catnip for energy vampires. It’s a classic bit of mad science for the character to indulge in, which makes sense on a certain level, if not an actual one. By having him dose himself he simultaneously seems to be stronger and weaker as  result, with the comic not quite sure what to make of the decision. Regardless, he wins the day and knocks Morlun down.

That leaves him stuck, however. The issue with a “Home Alone/Skyfall” ending is that James Bond just shoots and kills his villains – but just like Macaulay Culkin, Spidey only aims to injure, not kill. That means when he’s exhausted his plan, he still has an active enemy staring him right back between the eyes. Spidey isn’t going to murder Morlun outright, so the comic has to find a way to move past his plan and add in an extra element to help him really solve this problem: in this case, that means having Morlun’s long-suffering assistant show up at the last minute and shoot his master in the head. Problem solved!

But problem not really solved, is it? Because it shows up Spider-Man’s plan for being only half-complete. Everything worked out in the end only because somebody else was willing to murder Morlun: without that extra part of the narrative, Spider-Man would only have a temporary victory here. It reminds you of Batman, again, because at least Batman’s endless fights with his enemies have an ending in sight: a trip to Arkham, so they can be “rehabilitated”.That rehabilitation never works, but at least it means the villains are temporarily locked up, and out of sight. Most of Spider-Man’s fights end with him webbing a villain to a lamppost, so the police can deal with anything else that happens.

That’s what’s quietly damning about the character, really: he may be able to concoct these grand plans and schemes to save the day using mystifying and unlikely science, but he still hasn’t actually planned for what he’s going to do next. For all that Spider-Man is a hero, his methods start and end with “punch them in the face”. That’s not an effective long-term strategy (and it’s probably why none of his villains ever go near antihero status at any point, whereas Batman’s enemies like Poison Ivy and Harley Quinn are arguably inching closer and closer to being heroes every year). Spider-Man punches a problem until it goes away, but that’s not how you rid a city of villains, is it?