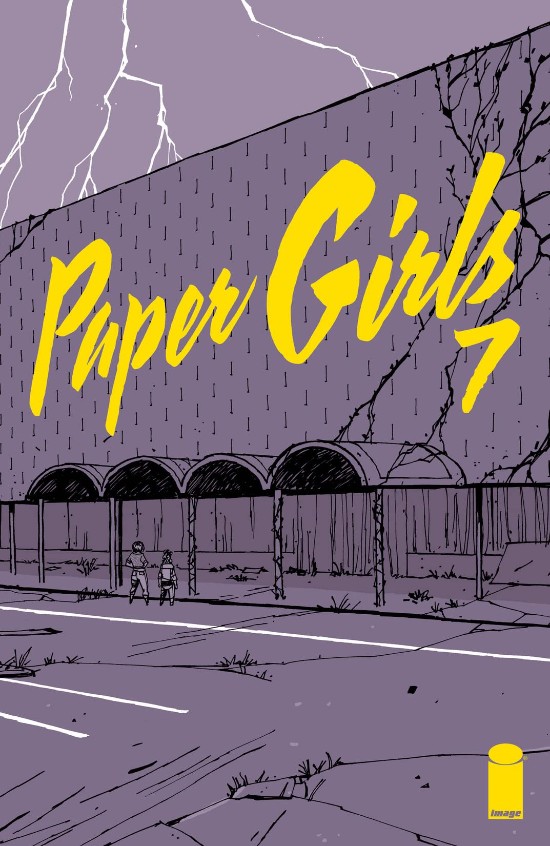 If a time traveller from the 1980s stepped out of a time machine into today, how would they feel about it? What would they see? Today, they’d see a world in crisis: streets empty, shops closed, ominous notices on every public building. But at least in the first half of 2016, the world was full of optimism and possibilities. In Paper Girls #7, Bryan K. Vaughan and Cliff Chiang explored what 2016 could have looked like to children time-traveling forward from 1988.

Paper Girls is a series about four newspaper delivery girls (Erin, MacKenzie, KJ, and Tiffany) in 1988 who stumble into the middle of a war between different factions of time travelers, embarking on an adventure that takes them across time and space before they can return to their normal lives. At the start of this issue, the paper girls of the 80s have already found themselves in 2016 Erin’s house for a while, whilst the older version of Erin from the future has discovered that she can connect to a mysterious futuristic Apple Device. Meanwhile a third Erin – identical to the 1988 version except for her sci-fi getup and alien language – has just landed in their hometown of Stony Stream, Ohio, as well.

The way the world is rendered is beautiful, with Cliff Chiang’s angular inks enhanced by Matt Wilson’s softly unreal colors. I adore the colors in Paper Girls with all my heart, and Wilson doesn’t disappoint in this issue. The twilight hours are rendered in beautiful pastel pinks, blues and purples that recall the neon lights that characterized pop culture in the 80s. Against the soft gradient of sunrise, the two Erins (her adult and child selves) follow directions from the Apple Device to a dead mall, emptied out by the online shopping revolution. Dead malls are a common sight in American suburbs today, but in the 1980s, when malls were still the quintessential teen hangout spot, a sight like this would have been unthinkable. Preteen Erin reacts accordingly. “This timeline… I think it’s all wrong.” 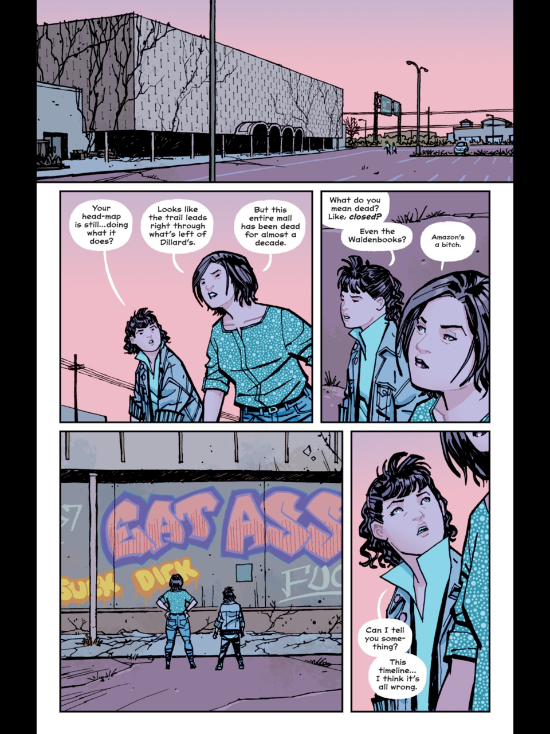 We see the contrast between past and present explored in more subtle ways as the issue progresses: Tiffany and Mac ride through the town to find their own older selves, carrying their newspaper delivery bags. “Truancy officers never hassle Preserver kids,” Tiffany gloats, unaware that by 2016, newspaper delivery kids and truancy officers would both be obsolete. A major part of these childrens’ lives and identities in their time is something that no longer exists in ours, which adds to the feeling of displacement the reader gets from seeing the time travelers in the present day.

Erin’s friends react differently to the different aspects of 2016 they each see. Tiffany is excited about the new models of cars and the possibility of female presidents, while Mac thinks the future is disappointing. The new cars don’t fly, Adult Erin’s all weird, and there aren’t any cool robots. And they still can’t find KJ. 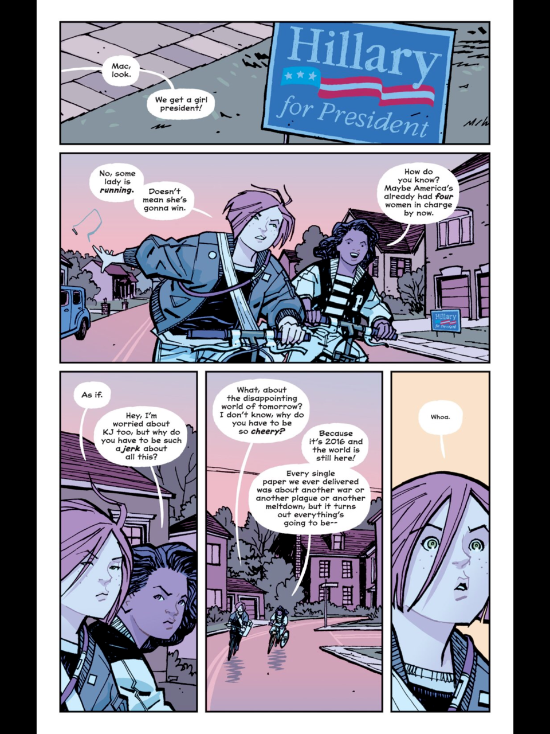 In Lindsay Ellis’s Youtube video about the 30 year cycle of nostalgia, she notes that there are two primary types of nostalgia: restorative and reflective. She also proposed a third type of nostalgia she called deconstructive, which criticizes the past rather than wistfully longing for it or attempting to revitalize it. The first Back to the Future film is an example of reflective nostalgia for the quaint and simple 1950s, for example, while in Paper Girls, the 1980s are deconstructed and shown with all of the uncomfortable prejudices and cultural anxieties of the time fully intact.

The biggest difference between Paper Girls and a similar time-travel narrative like Back to the Future is that, in Back to the Future, time travel is a storytelling tool, a device which allows the audience to explore the life and times of Marty McFly’s family and hometown across generations. The greater cultural contexts of suburban life in 1955 or 1985 aren’t examined in depth.

For Paper Girls, time travel is a lens through which we can analyze the past, present, and potential futures.

Twelve-year-old Erin still doesn’t really know what she wants from the world or who she wants to be, and at this point she mostly just wants to go home. But her forty year old self has a car and a house with a big TV and a good relationship with her sister. Erin at forty is still anxious and insecure about a life that isn’t quite what she thought she’d end up with, but twelve-year-old Erin tells her older self she looks cool.

Knowing that she has a future ahead of her and it isn’t completely hopeless gives younger Erin some security and confidence in her decisions. For older Erin, the reassurance from her younger self makes her feel better about being, in her own words, “some fat unwed loser with a dead-end job.” Time travel allows both Erins, past and present, to achieve a sense of catharsis. 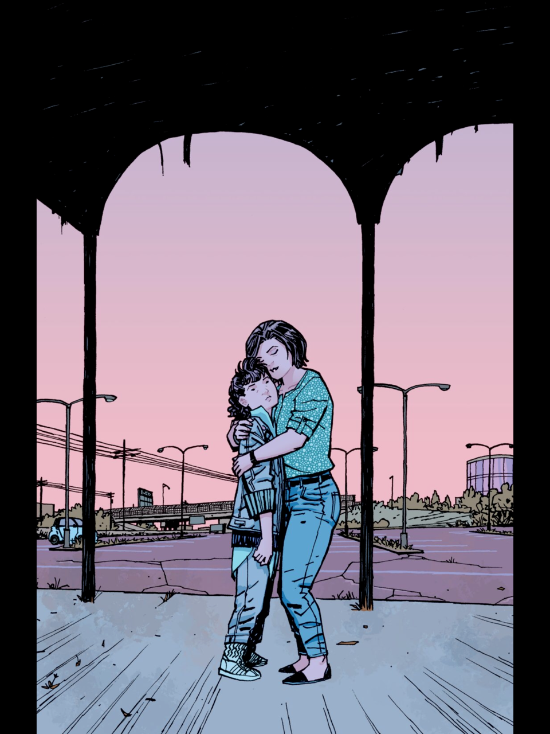 The view of both the past and present in Paper Girls is not idealized. This issue starts with a random passerby walking through the rain in a T-shirt reading “Justice for Tamir Rice and John Crawford,” anchoring the story to a specific point in history by reminding the reader of the problems society still faces today. The 1988 girls swear, smoke, and throw around language modern day readers aren’t used to hearing from twelve-year-olds. They experience 2016 as not a high-tech futuristic wonderland, but as a place of abandoned malls and Xanax prescriptions, “dumb Smart cars” and Uber drivers.

Paper Girls as a whole both reflects and deconstructs the nostalgia for the past from the perspective of the present. In issue 7, the time-traveling girls from 1988 serve as a lens to look at the present from the past, highlighting how much has changed about Stony Stream, technology, and the paper girls themselves. This issue focuses on Erin, exploring how she grew and changed with the world around her in the 28 years since her newspaper delivery days. Like the eras they live in, both Erins are flawed individuals. But they accept each other as they are, unvarnished, the same way that Paper Girls presents the world as a whole.

Paper Girls #7: The Present is Not a Gift
Written by Brian K. Vaughan
Drawn by Cliff Chiang
Coloured by Matt Wilson
Flats by Dee Cunniffe
Lettered by Jared K. Fletcher

Masha Zhdanova is a cartoonist, illustrator and writer whose work has been featured for sites including WomenWriteAboutComics. To find more of her work, you can find her website here – or follow her on Twitter here!